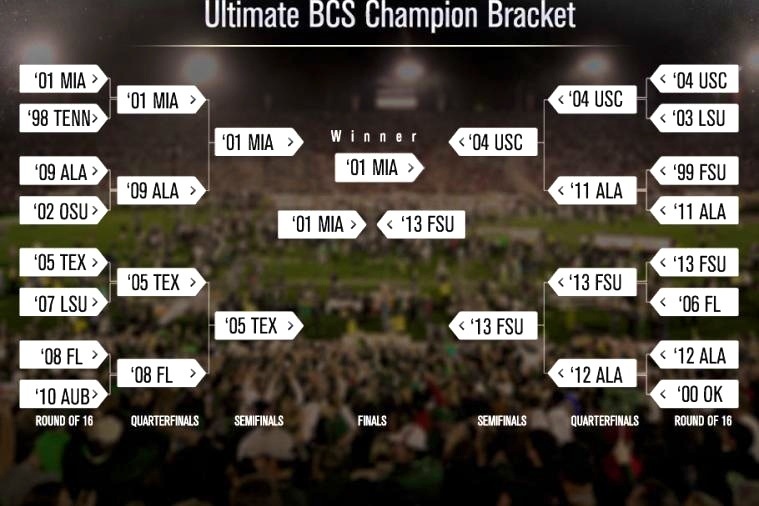 After 16 years, the BCS Era is over. Whether you love or hate the system, there is no denying that it has provided us with some great champions—but which has been the supreme team in the computer age?

To figure it out, Bleacher Report’s college football editors and lead writers power-ranked all 16 champions and set up a bracket to determine The Ultimate BCS Champion.

The 2001 Miami (Fla.) Hurricanes were the obvious No. 1 seed, as a whopping 38 players from that roster were selected in the NFL draft—11 were first-round picks. That's nearly two full starting lineups. Ironically, the No. 2 seed—2004 USC—doesn’t even have its title anymore after vacating it in 2011 due to NCAA violations surrounding Reggie Bush.

That 2001 Canes squad unanimously squashed the original BCS championship team, a Tennessee team that shocked the nation by winning a title just one year removed from replacing the irreplaceable Peyton Manning at quarterback.

While the ‘Canes took care of Tee Martin's Volunteers, Tim Tebow and Cam Newton two of the most prolific quarterbacks in SEC history, were pitted against one another with Tebow's 2008 Gators moving on.

However, Tebow didn’t have enough to top Vince Young’s stellar 2005 Texas squad, which provided one of the most thrilling title games of all time. Just as VY disposed of USC in the 2005 title game, he sent UT to the semifinals against the Hurricanes.

The Texas club was a formidable foe for Miami, as it beat a USC team that was almost identical to the 2004 champion squad. However, the ‘Horns couldn’t complete their run, as the 'Canes moved on to the finals.

On the other side of the bracket, USC unanimously dispatched of Nick Saban’s first BCS title squad, LSU from 2003. In a first-round upset, Saban’s third national champion, the 2011 ‘Bama squad, clipped Chris Weinke, Peter Warrick and Florida State's undefeated 1999 squad, which was ranked No. 1 through the entirety of its title run by a 3-2 vote.

While the 1999 version of the 'Noles fell early, this year’s champion Florida State squad dominated just as it did through its 2013 campaign. After finishing the regular season No. 1 nationally in scoring offense and defense, Jameis Winston’s ‘Noles failed to capture just one vote in three wins to move into the finals over the 2004 Trojans.

Who do you think is the ultimate BCS Champion?

Who do you think is the ultimate BCS Champion?

The 2013 Seminoles are champs today, but they were no match for Ken Dorsey's Canes. The '01 Hurricanes were never ranked lower than No. 2 throughout their title run, while this year's Florida State team started the season at No. 11 in the AP Poll. To further put the 'Canes talent in perspective, perennial All-Pros Frank Gore and Sean Taylor didn't even start in 2001.

The Seminoles were every bit as dominant as that club, but with its legacy still to be determined, it was no match for the star-studded ‘Canes in our bracket. To make matters worse for 'Noles fans, the 2001 'Canes came to Tallahassee and thrashed Florida State, 49-27.

*H/T to Bleacher Report columnist Alex Sims for helping create the text for this article.