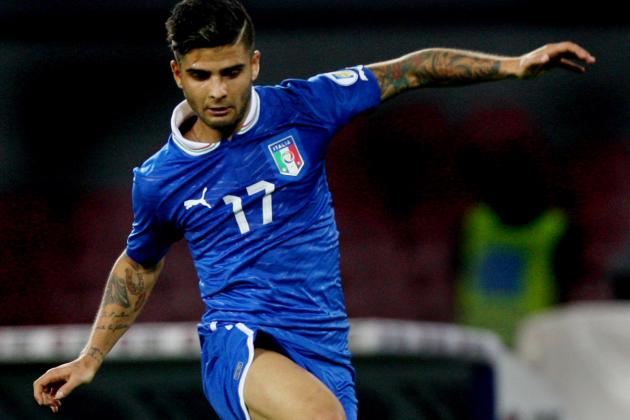 Willingness to experiment and give opportunity to youth has been a hallmark of Cesare Prandelli's Italy. And why not?

The Italians have a wealth of young talent at their disposal, and right now in Serie A, several young stars are making names for themselves and could become permanent fixtures in the senior Azzurri setup very soon.

Here are five players with exciting international careers ahead of them.

Domenico Berardi is currently impressing for Sassuolo, but if he keeps it up, it won't be too long until Juventus bring him back to the fold in Turin.

Just 19 years old, Berardi already looks like a complete forward. He's capable of playing across the front line and is as effective on the wing as he is in front of goal. He scores and creates with equal aplomb, was key to the club's promotion from Serie B last year and will be crucial to them if they're to survive in Serie A this season.

The Calabrian has no Italy caps yet, but at this rate, he should be impressing in the Azzurri jersey soon.

Mattia Destro possesses an enormous talent—albeit one that's yet to be consistently realised for club or country.

The 22-year-old has had a difficult time since making a high-profile move to Roma last season. He was expected to shine for the Giallorossi, but he failed to settle into Zdenek Zeman's side. Erik Lamela and the ever-green Francesco Totti outperformed him.

Then injury struck, and after that, controversy. Destro's injury seemed to have passed only to flare up during a spell with the Under 21 Italy side. Some blamed the medical staff, while others blamed the player, but whoever was at fault, Destro could have done without the drama. The lacklustre start to his Roma career following an expensive move, coupled with being tagged as Italy's next great striker, was enough pressure for a young player without adding more commotion.

The fact is that even without impressing too many fans or pundits, Destro managed seven league goals for the Giallorossi in a disastrous season for the club. Those goals came on the back of the 12 he scored for struggling Siena the year before—more than anyone had managed at his age since 1971, when Roberto Bettega was getting started at Juventus.

Destro's recent return to action against Fiorentina showed him at his best. It took him a little more than five minutes to find the back of the net and secure a win for Rudi Garcia's side that was looking increasingly unlikely. If he can stay on track, he'll be a central part of the plans at Roma and for Italy.

Young Nicola Sansone was the star for Parma in the recent game against Inter at the San Siro, and he looks certain to decide more games as he develops as a player. The 22-year-old scored twice for the Crociati, opening and closing the scoring for his side and earning them a share of the spoils in a 3-3 thriller.

The German-born Italian is a product of the Bayern Munich youth academy, and having featured for the Azzurri at all levels, he is now a key part of the Under 21 team. An attacking midfielder who can also play on the left or in a more advanced role, he's good technically and is developing into an intelligent footballer on and off the ball.

Ignore how many goals he conceded with Pescara last season—the Delfini were out of their depth in Serie A. The depressing goal difference belies the fact that Mattia Perin had a good season and is almost certainly a future star.

Now back as a key part of the setup at parent club Genoa, the native of Latina in Lazio was capped by the Azzurri at every youth level and has already been called up by Cesare Prandelli. But it's not just in Italy where Perin is highly thought of. Arsenal were considering a £17 million move for him last season, as recorded here by the Daily Mail.

Italy are rarely short on great keepers, so it's likely that Perin will have to bide his time before he wears the No. 1 shirt. But he has the makings of a superb keeper, and despite being just 21, he has a wealth of first-team experience, too. The future looks bright for him.

Napoli's Lorenzo Insigne is one of the most exciting young talents on the peninsula right now. Just 22, he already has more than 50 senior appearances for his hometown club to his name—on top of loan spells at Foggia and Pescara, where he was universally applauded for his creativity, intelligence and skill on the ball.

The diminutive forward doesn't have the physical force of a player like Mario Balotelli, but he is more than talented enough to shine at the highest level. He possesses the kind of inventive spark that usually ignites the more forceful centre-forwards.

Follow Italy (National Football) from B/R on Facebook and get the latest updates straight to your newsfeed!

We'd like to send you the most entertaining Italy (National Football) articles, videos, and podcasts from around the web.