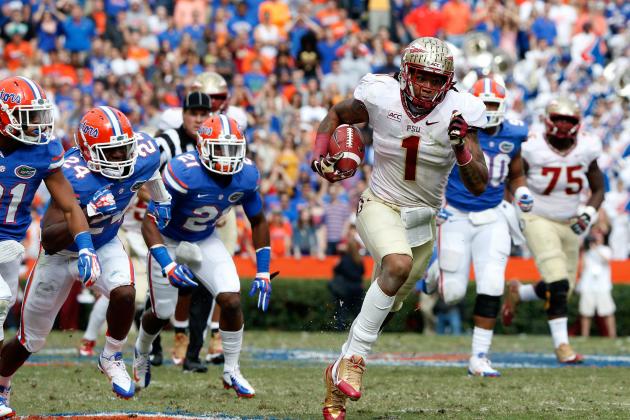 Saturday's contest between the Florida State Seminoles and the Florida Gators had all the makings of a bitter rivalry game: a Heisman front-runner, an even series record since 1976 and some extracurricular activity, including Florida's Ronald Powell uncorking some spittle, courtesy of SB Nation's Jason Kirk.

And although the Seminoles (12-0, 8-0 ACC) handed the Gators (4-8, 3-5 SEC) their seventh consecutive loss—a program record—by 30 points, it remains one of college football's most storied rivalries.

Hasn't been fun for Florida to watch FSU do all that winning. Gators S Jaylen Watkins: "It was probably like that for them last year."

But would it be too far-fetched to call it the biggest in-state rivalry?

It has grown increasingly clearer that both programs are moving in entirely opposite directions after witnessing a complete collapse of the Florida football program this season and FSU's resurgence with Jameis Winston under center.

Is Florida-FSU the biggest in-state rivalry?

Is Florida-FSU the biggest in-state rivalry?

And Saturday's contest was far from a banner Florida State-Florida meeting.

But history shows this series has been one of the most balanced rivalries. Since Bobby Bowden took over at Florida State in 1976, the series is nearly square at 20-19-1 in the Seminoles' favor, despite Florida holding a commanding 34-22-2 lead, overall.

During the 1990s, each contest between these two powerhouse programs—led by none other than Steve Spurrier and Bobby Bowden—had massive national title implications.

Solomon Patton on FSU becoming national title threat: "It's pretty hard to see that every Saturday."

From 1990 to 2000, both programs were ranked in the AP Top 10 when they met each year, and the winner of six of those meetings went on to compete for a national championship, including the 1996 Sugar Bowl that featured both programs.

And in recent memory, the stakes have remained relatively high.

Florida State's victory on Saturday brings the program one step closer to competing for both an ACC and potentially, the national title game on Jan. 6. If all holds true, it would be the second time since 2008 that the winner of the series has gone on to compete for the BCS Championship.

As Jimbo Fisher told Antonya English of the Tampa Bay Times before Saturday, it's a game that attracts all.

"Florida, to me, this is one of the great rivalries in college football," Fisher said earlier in the week. "One of the reasons (why) you come to Florida State. Very big game, always a very difficult place to play there in Gainesville. One of the most difficult in the country. They'll be ready to play. I know they will bring their 'A' game and we'll have to bring ours. … It's a rivalry game, it's a game you love to play in on both sides and it will be a great contest."

Follow Florida Gators Football from B/R on Facebook and get the latest updates straight to your newsfeed!

We'd like to send you the most entertaining Florida Gators Football articles, videos, and podcasts from around the web.