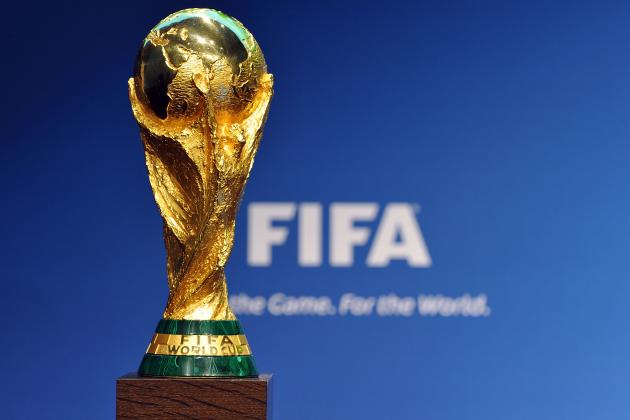 Some of football’s most famous faces have graced the World Cup finals over the years and left their marks in style on the game’s most prestigious competition.

Since the tournament began in 1930, players from across the globe have become household names thanks to their goalscoring exploits on the biggest stage of all.

Whether they went on the become their country’s greatest player of all time, or simply rose to the occasion, the contest’s history is littered with superstars adept at finding the back of the net.

So as qualifying for next summer’s finals in Brazil nears its conclusion across the continents, we look back at 50 of the greatest World Cup goalscorers from the past 80 years.

*This list is based purely on goals scored at the World Cup finals and does not reflect any individual’s ability or achievements beyond scoring in the competition.

Did You Know? Largely considered to be America’s greatest-ever player, Landon Donovan speaks Spanish and German and is also a self-confessed Everton fan after two loan spells at Goodison Park.

Did You Know? Raul became the first player to score 50 goals in the UEFA Champions League when he netted for Real Madrid against Olympiacos in September 2005.

Did You Know? As well as playing for the likes of Celtic and Barcelona during his 25-year football career, Larsson also played competitive floorball—a type of indoor hockey developed in his home country of Sweden.

Did You Know? Neeskens worked alongside fellow countryman Frank Rijkaard as his assistant manager at Barcelona, and he also made over 140 appearances for the Catalans during the 1970s.

Did You Know? After retiring as a player, current Belgium boss Wilmots briefly went in to politics and was elected to his country’s senate for the French-speaking Reformist Movement.

Did You Know? Krankl’s fame in Austria stretches beyond football, with the former Barcelona forward enjoying a musical career, which included a No. 2 single in 1985.

Did You Know? Milla was 38 years old when he scored his first World Cup goal at Italia 90, and he became almost as famous for his celebration, which involved dancing by the corner flag.

Did You Know? Former Real Madrid man Butragueno has five World Cup goals to his name, and he netted four of them in one game as Spain thrashed Denmark 5-1 to book a quarter-final place in Mexico in 1986.

Did You Know? Zico was one of seven different Brazil players to find the net at the World Cup in Spain in 1982, joining the likes of Socrates, Falcao and Serginho on goalscoring duty.

Did You Know? All of Romario’s World Cup goals came in the same tournament, as Brazil lifted the trophy in 1994 by beating Italy in the USA. The former Barcelona man also won the Golden Ball award for best player.

Did You Know? Still the only man to score a hat-trick in a World Cup final, Hurst was given his chance to shine in 1966 thanks to an injury to Jimmy Greaves, and one of the most famous pieces of football commentary of all time was born.

Did You Know? Now the president of UEFA, Platini not only excelled in three World Cups, but also at the European Championships, where he scored nine goals in his home country in 1984 before lifting the trophy as captain.

Did You Know? After 13 years as a player with Bayern Munich, Beckenbauer moved to the New York Cosmos in 1977 and starred alongside greats such as Pele and Carlos Alberto.

Did You Know? Three of Zidane’s sons are members of Real Madrid’s academy, where their father is sporting director. The Frenchman won five trophies with Los Blancos between 2001 and 2006, including the Champions League.

Did You Know? Such was his popularity in Brazil, double World Cup winner Garrincha had a string of nicknames, including Alegria do Povo (Joy of the People) and Anjo de Pernas Tortas (Angel with Bent Legs).

Did You Know? Boniek became chairman of the Polish Football Association last year, but his stint as manager of his country in 2002 lasted just five games before the former Juventus and Roma man resigned.

Did You Know? Having netted five times in qualifying, Suker took the 1998 World Cup by storm, winning the Golden Boot with six goals as his country marched to the semi-finals before losing to eventual winners and hosts France.

Did You Know? Another player who scored all of his World Cup goals in one tournament, Stoichkov won 13 trophies during two separate spells with Barcelona during the 1990s, including five La Liga titles.

Did You Know? “Toto” Schillaci was the World Cup’s top scorer in 1990, but his goals couldn’t land Italy their fourth title in their own backyard. The Azzurri made it to the semi-finals, but lost out to Argentina in a penalty shootout.

Did You Know? Henry has won the league in France, England and Spain, as well as the World Cup and the European Championships with France. There is also a bronze statue of him outside Arsenal’s Emirates Stadium.

Did You Know? Regarded as one of the most gifted players of all time, Rivelino was an integral part of Brazil’s famous World Cup-winning side of 1970, where a free-kick against Czechoslovakia earned him the nickname "Atomic Kick."

Did You Know? Matthaus remains the only German to receive the FIFA World Player of the Year Award (now the Ballon d’Or), becoming the first-ever winner of the accolade in 1991.

Did You Know? Labelled the non-flying Dutchman due to his fear of flying, Bergkamp returned to his roots in 2011, becoming assistant manager at his first club, Ajax.

Did You Know? Argentina had to wait until 1978 to win their first World Cup, but when they finally got their hands on the trophy, it was largely thanks to the goals of Kempes. The striker scored twice in the final in a 3-1 win over Holland.

Did You Know? Uruguay played only four games to lift the World Cup in 1950, and Miguez played a vital role. He scored a hat-trick in an 8-0 demolition of Bolivia, and his side went on to gate-crash the party in Rio by beating hosts Brazil.

Did You Know? Villa missed out on picking up the Golden Boot at the 2010 World Cup, despite finishing on the same number of goals as winner Thomas Muller. Both finished on five, but the German was credited with more assists.

Did You Know? In a front three that included Ronaldo and Ronaldinho, Rivaldo scored in Brazil’s first five fixtures at the 2002 World Cup, but was disgraced and subsequently fined by FIFA after feigning injury against Turkey in the group stages.

Did You Know? Voller scored in three consecutive World Cups for the Germans and picked up a winners’ medal for his troubles in 1990. He also earned a red card against Holland following an infamous spitting incident with Frank Rijkaard (pictured)

Did You Know? The legend that is Maradona started in 21 consecutive World Cup matches for Argentina, stretching over four tournaments. As well as his eight goals, he also provided eight assists, including five in 1986.

Did You Know? Centre-forward Seeler netted in four World Cups in a row for Germany between 1958 and 1970. He also spent 19 years on the books of Hamburg and scored over 400 goals for the Bundesliga outfit.

Did You Know? Another star of the Brazil team that won consecutive World Cups in 1958 and 1962, Vava only picked up 20 caps for his country, but he scored 15 goals in the process.

Did You Know? Vieri became the world’s most expensive footballer when he joined Inter Milan from Lazio for £32 million in 1999, and he scored more headed goals than any other player in Italian league history.

Did You Know? Unfortunately for Baggio, though he scored five goals for Italy in their run to the World Cup final in 1994, he is largely remembered for missing the all-important penalty that handed Brazil the trophy in an agonising shootout.

Did You Know? Such was Rummenigge’s popularity in the early 1980s, obscure British pop duo Alan & Denise penned a bizarre single about the striker which reached No. 43 in the German charts.

Did You Know? It’s fair to say 1982 was a good year for Rossi, as he put an ugly betting scandal behind him by netting the goals that won his country the World Cup and finished top scorer at the competition. He also lifted the European and World Player of the Year awards.

Did You Know? The legend known as “The Hurricane” is one of only three players to score in every game at a World Cup tournament, along with Uruguay’s Alcides Ghiggia and Frenchman Just Fontaine.

Did You Know? Of Eusebio’s nine goals at the 1966 World Cup in England, four of them were penalties, and he made such an impression in the U.K. that a wax model of the forward was added to London’s Madame Tussauds museum.

Did You Know? The only Polish player ever to win a World Cup Golden Boot, Lato enjoyed a distinguished international career, winning Olympic gold in 1972 and a silver medal in 1976.

Did You Know? Lying just one short of Bobby Charlton’s record of 49 goals for England, Lineker was given the chance to equal that tally in a friendly versus Brazil in 1992. But the striker fluffed his lines and missed from the penalty spot.

Did You Know? Known simply as “The Boss," Rahn scored the German’s 84th-minute winner against the mighty Hungary in 1954, who were unbeaten for four years leading up to that year’s World Cup final.

Did You Know? Cubillas made headlines in the U.K. after netting twice against Scotland during their group game in Argentina in 1978. His exploits saw the striker finish as the tournament’s second-highest scorer along with Holland’s Rob Rensenbrink.

Did You Know? Although he never won the World Cup with his country, “Batigol” is ahead of some illustrious names as Argentina’s all-time leading World Cup goalscorer, including Maradona, Guillermo Stabile and Mario Kempes.

Did You Know? Incredibly, all of Kocsis’ World Cup goals came at the 1954 tournament, where he netted two hat-tricks and scored in every game except the final, where the overwhelming favourites lost to Germany.

Did You Know? Klinsmann’s 108 games for Germany make him their third-most-capped player. Only Lothar Matthaus and Miroslav Klose have made more appearances than the former Tottenham Hotspur man.

Did You Know? With over 1,000 goals to his name from an illustrious career, Pele won the World Cup with Brazil no fewer than three times, and he scored in the final twice in 1958 and 1970.

Did You Know? France scored an impressive 23 goals at the World Cup in 1958, and the prolific Fontaine netted 13 of them, including hat-tricks against Paraguay and Germany.

Did You Know? Despite his impressive impact at international level, Klose has never won a major trophy with Germany, picking up a World Cup runners-up medal in 2002 and third-place accolades in 2006 and 2010.

Did You Know? Though he couldn’t stop scoring at the 1970 World Cup, it was four years later that Muller’s journey to national hero status was complete. The Bayern Munich striker scored the winner in the final on home territory against rivals Holland.

Did You Know? Ronaldo’s place among the greats is undisputed, with the goal machine scoring in three consecutive World Cups and picking up two winners’ medals in 1994 and 2002. Alongside Zinedine Zidane and Lionel Messi, he is one of only three men to win a hat-trick of Ballon d’Ors, and he totalled 62 goals in 98 games for his country.