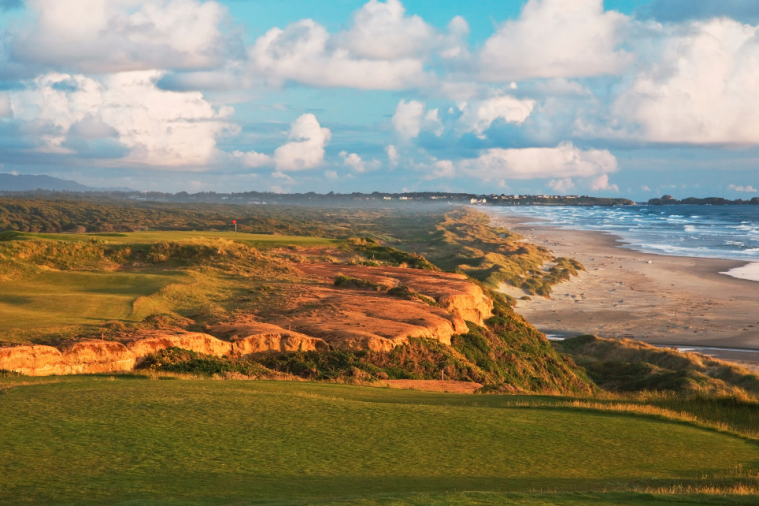 Photo Courtesy of Bandon Dunes Golf Resort and Wood Sabold
The eye-popping 16th hole at Bandon Dunes will give you a serious gut-check off the tee.

Bandon Dunes Golf Resort wasn’t designed as much as it was discovered.

The quartet of seaside golf courses along the Pacific Coast emphasize nature and downplay artificial features, which is why you’ll see neither carts nor cart paths and not a single piece of real estate on any of the sprawling links courses. Even the snack bars are hidden behind brush and hills to keep from interrupting your experience. Any and all distractions and diversions have been stripped away.

Bandon Dunes will mesmerize you. 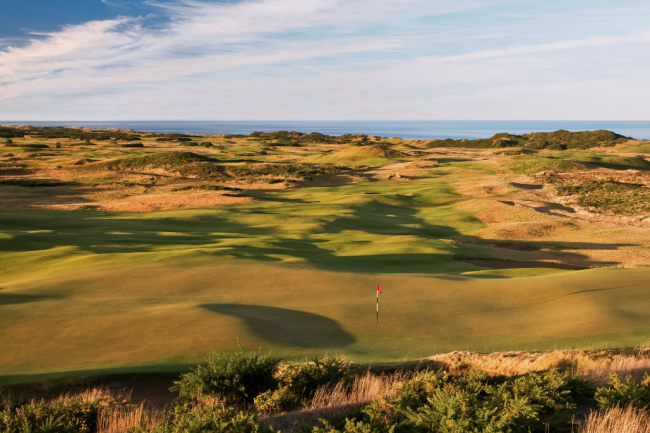 Photo Courtesy of Bandon Dunes Golf Resort and Wood Sabold
Don't expect many flat lies at Old Mac, which was inspired by Scottish-designed holes and is a true links challenge from start to finish.

It is as its founder, Mike Keiser, intended it to be: dream golf. True links style played firm and fast and in the face of fierce winds, all in a secluded, majestic part of the world, Bandon, Ore. Turn a golfer loose at Bandon Dunes, and it’s love at first sight as much as it’s love at first swing. I was there for three days, played 103 holes of golf and had to be pried away. 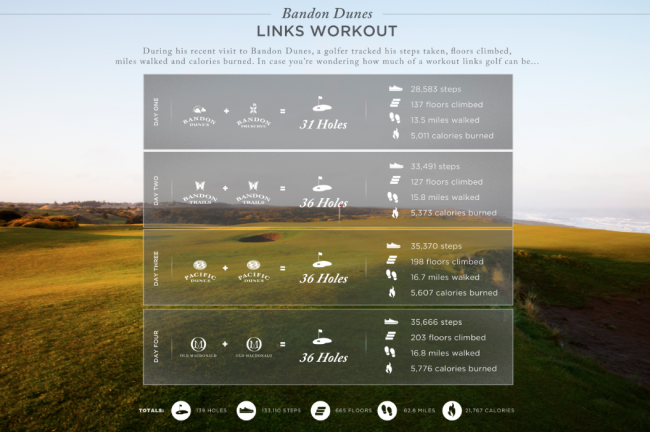 Photo Courtesy of Tim Scahill
Who says golf isn't a sport? When you're playing Bandon Dunes, endurance is crucial.

Perhaps my most striking observation was discovering that no sense is immune to Bandon's wonder. The property is made up of three coastal 18-hole tracks, another course that navigates through a forest of pines, and finally a recently opened par-three course of 13 gorgeous, but treacherous, coastal holes. 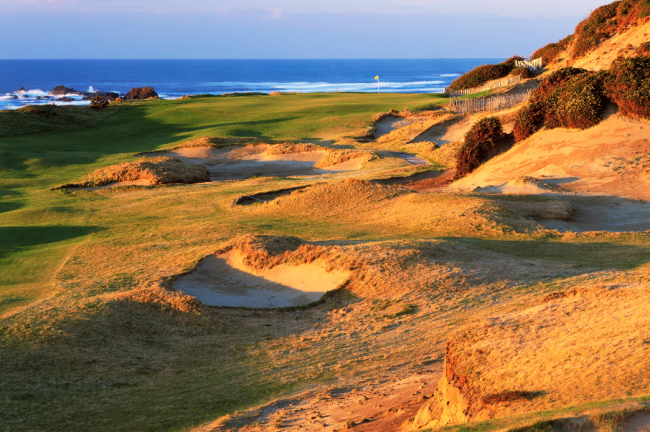 Photo Courtesy of Bandon Dunes Golf Resort and Wood Sabold
The par-four 13th hole at Pacific Dunes is a beast; 444 yards into the wind, uphill and hugging the coastline while protected by a plethora of bunkers from the fairway to the green.

You can hear the wind howling on the tee box on No. 8 on the Pacific Dunes course just as well as you can see the waves crashing along the coastline just beyond the green as you try to save par on the eye-popping 16th at Bandon Dunes. The fresh smell of pine trees washes over you for 18 holes at Bandon Trails in the morning, followed by the scent of beachwood at Old MacDonald to round out a day of 36. And, unfortunately, if you have as much trouble as I did out of the bunker, you may even taste the grains of sand. 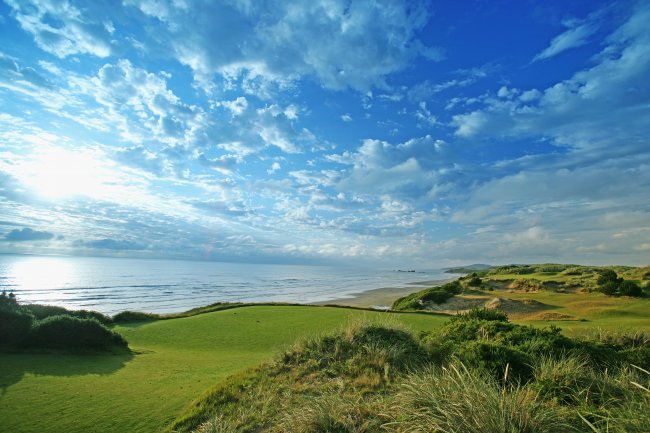 All the while Bandon evokes a soulfulness that you simply can’t get at the course around the corner.

What—you don’t believe there can be soulfulness in golf?

Try standing on Bandon’s 16th green—which hangs on the edge of a cliff, the edge of the continent—looking out on the rumpled fairways and steep pot bunkers that line the coast and not feeling something deeper, even spiritual, that links you to a tradition hundreds of years old and spans the globe. It reminds me of how modern day baseball players must feel stepping onto the fields at Wrigley Field or Fenway Park, or perhaps the old Yankee stadium. Like those sanctuaries of sport, Bandon is a modern day mecca for golfers. 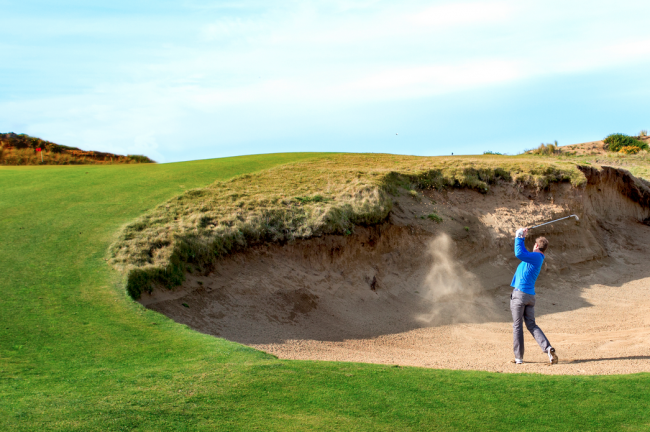 Photo Courtesy of Tim Scahill
The bunkers at Bandon are so steep that some have stairways to help you enter and exit.

Sculpted from natural dunes and untamed gorse—the pesky and prickly Irish plant that sucks up golf balls like a magnet—Bandon Dunes offers a challenging design in authentic links style. 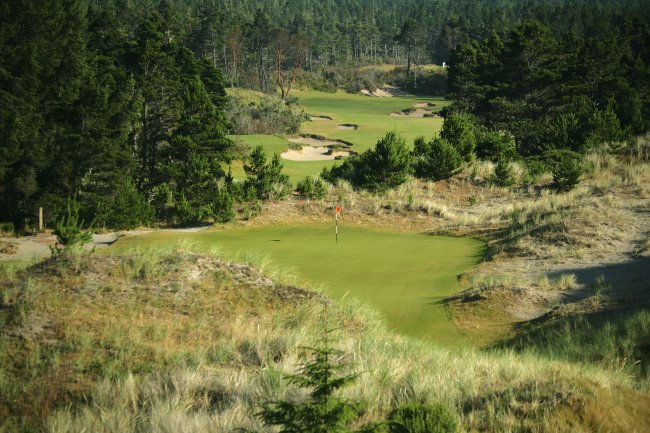 David Cannon/Getty Images
Bandon Trails is a refreshing getaway from the howling winds of seaside links, but the towering cedars and pines pose just as distinct and intense of a challenge.

For all of its splendor, take notice: Bandon is no stroll across the fairway.

Get golf tips directly from one of Bandon's esteemed caddies.

You’ll balloon the ball into howling winds that regularly hit 25 mph or higher. You’ll likely need multiple swings—and often a prayer—to get out of the numerous and cavernous bunkers (there’s one so massive and costly that it’s nicknamed “Hell Bunker” after St. Andrews' 14th hole). You’ll lose golf balls—emphasis on the plural—and three-putts are simply a fact of life, especially on the Old MacDonald course, which boasts the largest greens in all of North America. That's not a typo. The greens regularly stretch 60 or more yards in length. 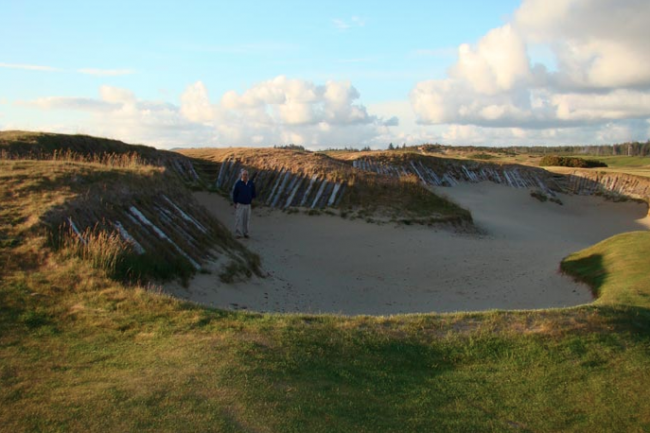 And the painfully high numbers scattered across your scorecard will be just another part of the experience. 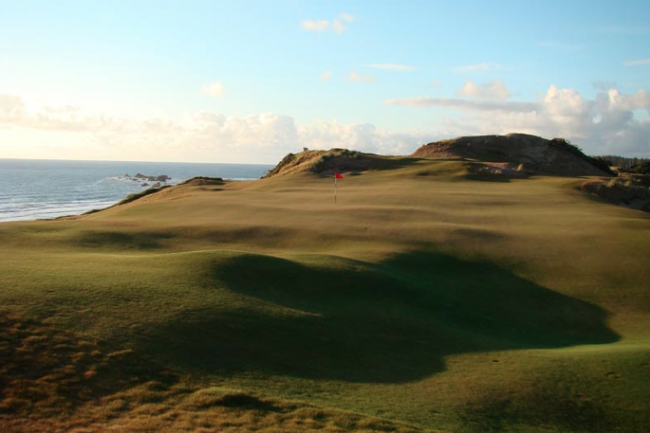 Photo Courtesy of Bandon Dunes Golf Resort and Wood Sabold
Not having a camera at Bandon Dunes is like forgetting your putter; you simply won't have the same experience without it.

The town of Bandon, and the surrounding mountains, forests and ocean, is total "Paul Bunyan" territory. Untouched and brimming with rugged beauty. 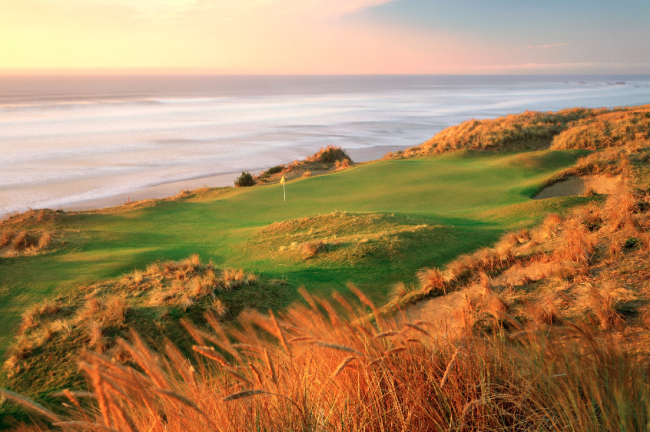 The original gorse covering the cliffs that overlook the Pacific is a vital and active element of the Bandon courses, just like, as Stephen Goodwin in Dream Golf: The Making of Bandon Dunes calls it, “the active, Sahara-like dunes, grassy wetlands, and quicksands” of the Whistling Straits-Dustin Johnson calamity variety.

And over on the Bandon Trails course, which doesn’t have the coastal links feel of Pacific Dunes, Bandon Dunes or Old Mac, you encounter an equally demanding test, but this time through an endless forest of towering pines and even a meadow with its own flora and fauna. 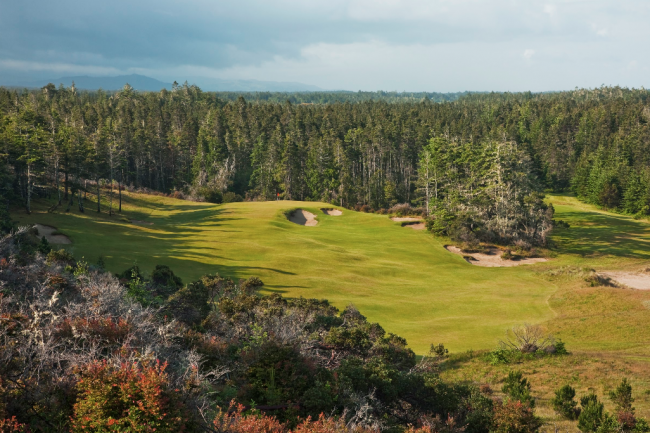 Photo Courtesy of Bandon Dunes Golf Resort and Wood Sabold
The drivable par-four 14th at Bandon Trails provides one of the most scenic views on the property, overlooking the forest, sprawling links and dunes all the way to the ocean.

Questioning whether a course like Bandon, that’s been in existence less than two decades, can live up to the prestige of centuries-old links courses—from Muirfield and Ballybunion to Carnoustie and St. Andrews—has contributed to its mystique. My dad—my eternal playing partner—and I used to whisper about “Bandon” when my mom left the room, as if scheming a plan to make the voyage. “What is it, really?” “How do we get there?” “They say it’s epic!” 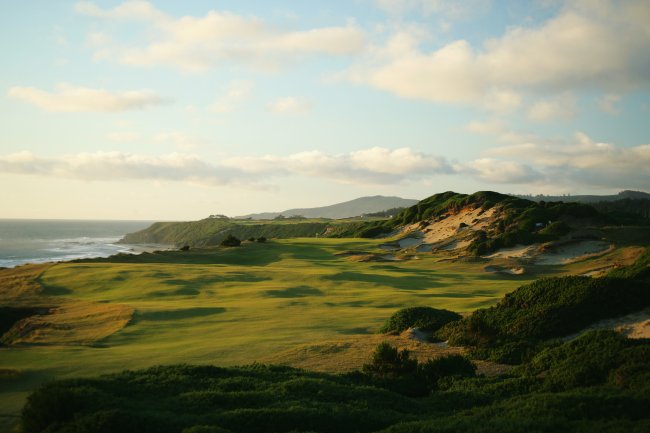 David Cannon/Getty Images
This hole may look pretty, but it's brutal when 25-30 mph winds howl off the coast.

When I finally arrived, it was like turning a kid loose at Disneyland; you won't need to convince him or her of anything. It speaks for itself, dazzling to no end. 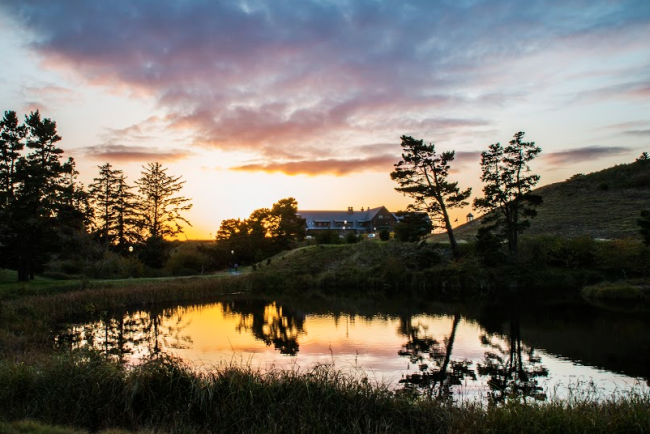 Throughout my marathon of five rounds in less than 72 hours, I expected harsh rains and wind and all the other grim conditions of Oregon's coast, but instead I lucked out with constant sunshine. I expected to hit sideways and backward out of steep pot bunkers, but managed to escape for the most part unscathed. I expected to have a few disastrous four-putts on the multitiered greens—some of which resemble mini-mountain ranges— but learned the power of the lag putt.

Lastly, while I expected dramatic views, nothing could’ve prepared me for the coast’s captivating, and yet calming, effect. I vividly remember standing on the coastal 11th tee box at Pacific Dunes, a deceptive 148-yard par three from the tips and perhaps the most visually pleasing hole of the bunch, and wondering whether I was in Hawaii or Oregon. At one point my playing partner had to tap me on the shoulder to remind me to hit, as I had fallen into some kind of reverie. 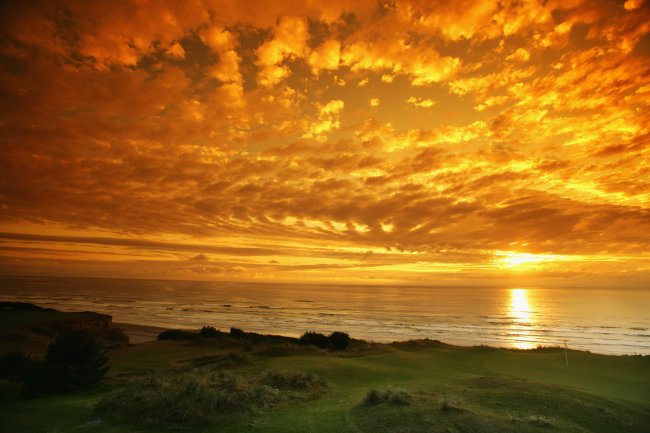 Maybe that’s what Golf Magazine's Jaime Diaz was referring to when he likened the Bandon experience to a “blissful golf trance in which words are unnecessary.” 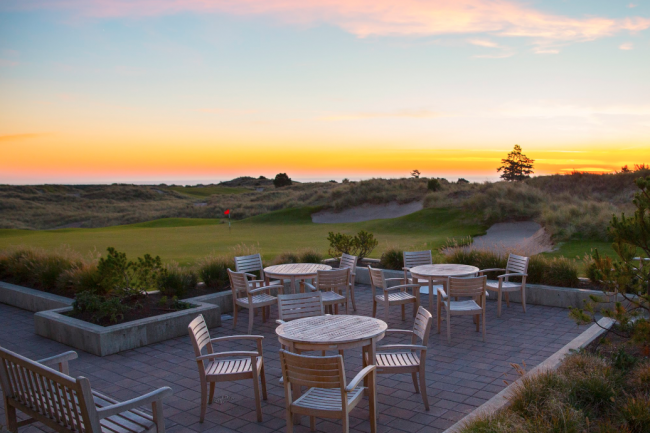 Photo Courtesy of Tim Scahill
Sunset just steps away from the 18th hole at Bandon Trails.

From the local muni in Oakland, Calif., to the ritzy courses of Victoria in British Columbia, I’ve heard golfers of all backgrounds, handicaps, incomes and accents tell the mighty myth of Bandon. I now know the reality of that myth, and it’s a place of enchanting lore.

All quotes were obtained firsthand.