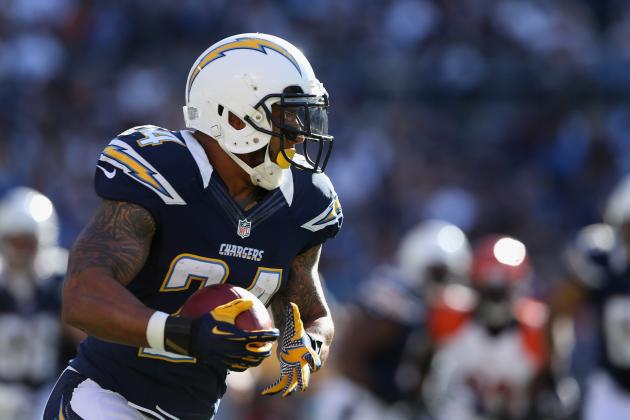 Here comes the latest chapter in the Ryan Mathews saga.

Early reports from the media outlet Examiner.com stated that San Diego Chargers running back, Ryan Mathews, had been arrested on June 30 following a fight outside the downtown San Diego nightclub SideBar.

"Witnesses say words over a female were exchanged and Mathews reportedly knocked one male out cold and the individual was taken to UCSD Medical Center."

After some further fact checking, Teri Figueroa of UTSanDiego.com was able to confirm with the San Diego Police department that the Chargers running back had not been taken into custody regarding the incident.

“We can say that he was definitely not arrested by SDPD," Rose said, "but there might have been a separate arrest that lead to that (report). … It was not Ryan Mathews.” said Sgt. Robin Rose.

It didn't take long after the story broke for it to end up on Twitter.

Eric Stangel, Executive Producer and Writer for the Late Show with David Letterman had this to say...

According to report Ryan Mathews arrested after fight. That sound you hear is Michael Turner's phone ringing... #Chargers

Stangel followed his previous tweets with this one after news broke that Mathews wasn't actually arrested...

Mathews had this to say about the incident.

Home healthy and happy! Don't know how my name got in this but I'm good!

Mathews, the 12th overall pick in the 2010 NFL Draft, has come under fire from fans who are obviously frustrated with the running back's lack of productivity on the field.

He broke his right clavicle in a preseason game against the Green Bay Packers that sidelined him until the third week of the 2012 season.

When he did return to the starting lineup, his performance was lackluster at best.

Mathews rushed for 44 yards on 10 carries and caught five passes for 32 yards, but a fumble inside the Falcons' 5-yard line tarnished a what could have been considered okay performance after coming back from a major injury.

In the week 15 game against the Carolina Panthers at home, Mathews suffered a broken left clavicle and was placed on injured reserve for the remainder of the season.

His ability to hang on to the ball (when he has it) has been a cause for concern. Mathews is averaging three fumbles a season, losing the ball 2.3 times per season.

In June 2013, an article by Bill Williamson of ESPN.com highlighted that Mathews had been the target of a multitude of cruel messages on Twitter.

I interviewed Ryan Mathews before the start of his rookie season in 2010, and while he was excited to show what he was capable of on the field, he was well aware of having extremely large shoes to fill.

In my opinion, this is a make or break year for Ryan Mathews. He needs to put up some stellar numbers and hold onto the ball in order to persuade Chargers fans to think differently of him.