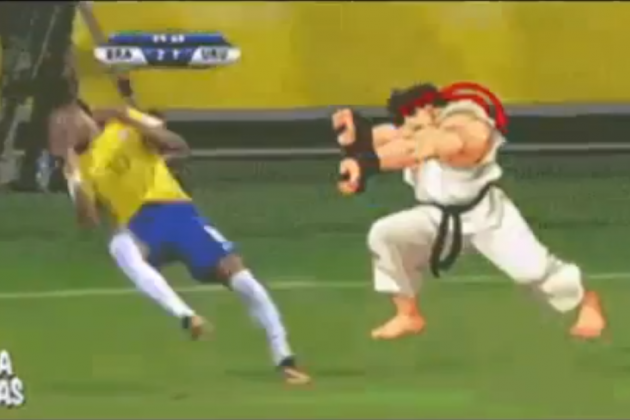 Young superstar Neymar has helped lead his native Brazil to the final as hosts of the Confederations Cup. But the 21-year-old Barcelona signee has gained Internet fame over the last 24 hours not for his goal-scoring exploits, but for his diving.

Sure, Neymar set up the game-winning goal in Wednesday’s 2-1 win over Uruguay, famously blowing a farewell kiss to a departing opponent before playing the decisive corner kick.

But what will live in infamy from the semifinal in Belo Horizonte is instead a blatant dive that sparked an Internet meme.

In the 90th minute, Neymar briefly tussled with Uruguay defender Walter Gargano and proceeded to go down as if he’d been shot...

…or dealt a Street Fighter-style uppercut…

…or booted with a Mortal Kombat Liu Kang-style kick.

Hell, let’s just give it the full Street Fighter treatment:

“Neymar is very lightweight,” he told The Telegraph. “He can drop to the ground and fool the referee. Neymar can feign a foul so, we must be watchful that nobody’s fooled by his ability.”

Thankfully, he can’t fool you Watchmen on the Interwebs.

We'd like to send you the most entertaining Brazil (National Football) articles, videos, and podcasts from around the web.