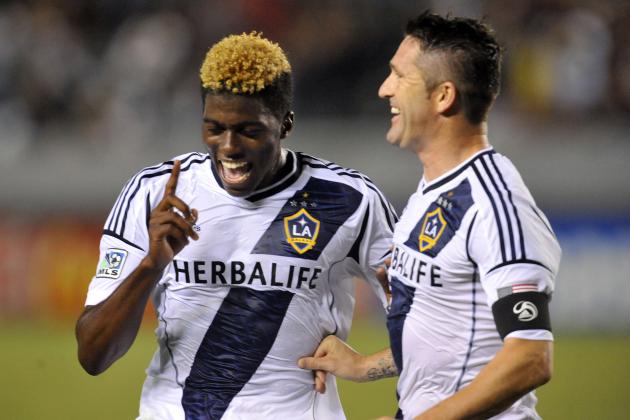 The summer heat intensified in MLS Week 17. Cooler heads did not prevail.

Toronto FC and the Houston Dynamo played to another draw Saturday night. Unfortunately, there were no late dramatics. Both teams were unable to impact the scoreboard.

Real Salt Lake had no issues in that department. Goals from Kyle Beckerman and Robbie Findley secured a 2-0 victory over the Seattle Sounders on Saturday. The Claret and Cobalt are now tied atop the Supporters’ Shield standings with 30 points.

But neither team was able to make the list of best and worst from MLS Week 17.

Read on to find out who did.

Don’t fret. Most of the league didn’t, either.

It took 11 starts, 1,010 minutes and 19 shots, but Pontius is finally on the board in 2013. The 26-year-old veteran opened his season account after burying a penalty kick in DC United’s 1-0 victory over the San Jose Earthquakes.

Interestingly enough, it was Justin Morrow who was responsible for United’s only goal of the match. According to the league’s official website, the Quakes defender wasn’t exactly singing the praises of DC’s recent run of form:

If you lose to them, it looks terrible. No one wants to lose to DC. That’s how you don’t overlook them. We will know what will happen if we lose to them.

It was Morrow’s early challenge on Chris Korb that looked “terrible.” Referee Jair Marrufo had no choice but to point to the spot.

For DC, the 1-0 victory put an end to 105 days of misery. The 13-game winless streak—a club record—is finally over.

Sporting Kansas City were back to their winning ways. The team held a 2-0 lead in the 68th minute...and then C.J. Sapong happened.

Intentional or not, kicking a ball toward a prone player is never a good idea. But that’s exactly what Sapong did in Saturday's 2-2 draw with FC Dallas. The foolish moment ended Sapong’s night and allowed Dallas to remain unblemished at home.

The question is: Would referee Mark Geiger have shown a red card if he noticed the ball was already headed toward a prone Andrew Jacobson?

You know what, I don’t know. I think it was a goofy red...I don’t know if we would have been able to score if they’d have had 11 on the field but there also probably could have been more yellow cards given out to both teams.

But Sporting didn’t have all 11 on the field. As a result, the Hoops took full advantage.

Jacobson's header gave the home crowd hope in the 88th minute. Walker Zimmerman’s equalizer in the 90th minute sent the 16,361 in attendance into a jubilant frenzy. Dallas completed the comeback.

With the draw, Sporting extended their winless streak to four games.

Welcome to the Mike Magee show.

The 28-year-old veteran proved to be unstoppable in Week 17. Even unorthodox finishes are finding the back the net at this point.

Magee has scored a goal in each of his six matches as a member of the Chicago Fire. Two have come in the U.S. Open Cup. The latest came in the 54th minute of Saturday’s 2-1 victory over the Columbus Crew. But his 10th goal of the season wasn’t a diving header or a beautiful bender off the far post.

Magee’s inextinguishable confidence allowed him to chest poke Joel Lindpere’s cross past goalkeeper Andy Gruenebaum. It was his first game-winner as a member of the Fire.

With 10 goals, Magee is now level with Jack McInerney and Marco Di Vaio for the MLS Golden Boot lead.

The June swoon is in full effect for the New York Red Bulls.

Sunday's 3-0 loss to the Philadelphia Union was the team’s third consecutive loss in all competitions. A team that once found itself atop the Supporters’ Shield race is now third in the Eastern Conference.

True, New York was without the services of Juninho, Jamison Olave and Tim Cahill. But the Red Bulls appeared disjointed and lethargic from the opening whistle.

The rust of a 22-day layoff showed.

A Conor Casey goal in the seventh minute foreshadowed what would be a disastrous afternoon. It was the sixth goal New York has allowed in the first 15 minutes of a match. That’s tied for most in the league.

But the fun didn’t stop there.

Lloyd Sam’s calamitous challenge in the 28th minute resulted in a red card from referee Baldomero Toledo. New York was forced to finish the match down a man and down a goal. Casey took advantage in the 64th minute to complete his brace. Antoine Hoppenot sealed the trifecta in the 88th minute.

The Red Bulls finished with one win in June of last season.

Given the team’s current form, they’ll be lucky to match that productive output in 2013.

You can’t stop the Portland Timbers. You can only hope to contain them.

Sunday’s 3-0 victory over the Colorado Rapids extended the team’s 15-game unbeaten streak. Even better, the victory propelled the Timbers to the top of the Supporters’ Shield standings.

Frederic Piquionne opened his MLS account with a header the 12th minute. Ryan Johnson put the game away with a strike in the 84th minute.

But it was Will Johnson who stole the show.

The team captain scored his sixth goal of the season in spectacular fashion. After bursting into the area, Johnson flicked one past the Colorado defense and buried a half-volley into the center of the net.

According to the team’s official website, the 26-year-old veteran was euphoric after scoring in the 45th minute:

When the ball hits the back of the net, it’s a great feeling, especially in a game like this where your team needs to win. The thing that gets me excited is scoring a goal for my teammates and having them all come over and congratulate me, it’s a special feeling with this group of guys.

The goal was Johnson’s sixth of the season. He had six goals in his last three seasons with Real Salt Lake combined.

Call it the SuperClasico all you want. But there is nothing “super” or “classic” when Chivas USA face the Los Angeles Galaxy.

The league’s most fabricated rivalry ended in a 1-0 victory for the Galaxy late Sunday night. The Goats were out-shot 16-6 and only managed to hold 38 percent possession. A Gyasi Zardes header in the 44th minute gave the Los Angeles its 17th regular-season victory over Chivas.

The two have played only 27 times.

The loss extended Chivas’ losing streak to seven, matching the club record set at the end of last season.

It was exciting to face Bruce Arena’s Galaxy in a stadium like this one. It should be something that motivates any trainer. I am excited that I had this opportunity, although, I am not satisfied because the results were not favorable, but I am sure that Chivas is taking the desired path...This is a team that is better than what the results show.

If this is the desired path, allow me to veer off course.

When your fanbase has to result to flying a scrolling LED night sign to show their discontent, you know you've hit rock bottom. Chivas fans want owner Jorge Vergara "out." Given the team's recent history, can you blame them?

We'd like to send you the most entertaining MLS articles, videos, and podcasts from around the web.