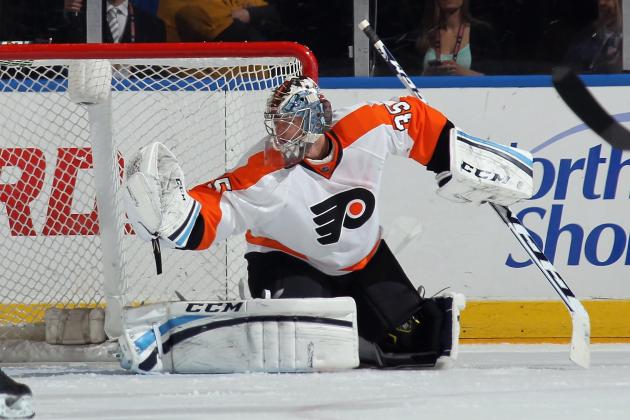 There a two ways for an NHL team to get a franchise goaltender: Draft and develop one from within the organization, or trade for an underperforming one with a great deal of potential and hope for the best.

Nobody trades a Marty Brodeur or a Jon Quick, or lets them go via free agency—unless they are past their prime or are no longer performing.

The Philadelphia Flyers have two goaltenders within their system who have the potential to become "the man" in net, something that has been missing on Broad Street since the departure of Ron Hextall.

These two goaltenders are Anthony Stolarz, who has been drafted and is being developed within the organization, and Steve Mason, who has underperformed badly in recent times with the Columbus Blue Jackets.

In order to try and unearth a franchise goaltender, the Flyers need to maximise the opportunities of these two players.

Admittedly, Stolarz is still some time away from making it to the NHL. Mason, however, is ready to play.

My idea to maximise the opportunities for Mason as well as provide the Flyers with stable and reliable goaltending for the next few seasons is this:

The idea would be for the new goaltender to work in a 50/50 tandem with Mason.

There are many advantages to this strategy.

Who should be the starting goaltender for the Flyers next season?

Who should be the starting goaltender for the Flyers next season?

Firstly, signing a proven commodity to a short-term deal makes sense independently of Mason's performance. If Mason plays well, a proven goalie on a short-term contract can be traded, or at the very worst, bought out. If Mason plays poorly, the other goalie can assume the No. 1 mantle until Stolarz is ready, or a different goaltender becomes available.

Now, I can already hear people screaming, "WHAT ABOUT JON BERNIER?!?"

Realistically, I'd rate Bernier and Mason as being almost equivalent in terms of potential, and both will need to work alongside a proven commodity in the pressure cooker environment of Philadelphia. I think ideally you would have one or the other, so it doesn't make sense to give up assets for Bernier when you already have Mason.

I guess the only remaining question is, will the Flyers ever get that coveted franchise goaltender? Only time will tell.

We'd like to send you the most entertaining Philadelphia Flyers articles, videos, and podcasts from around the web.