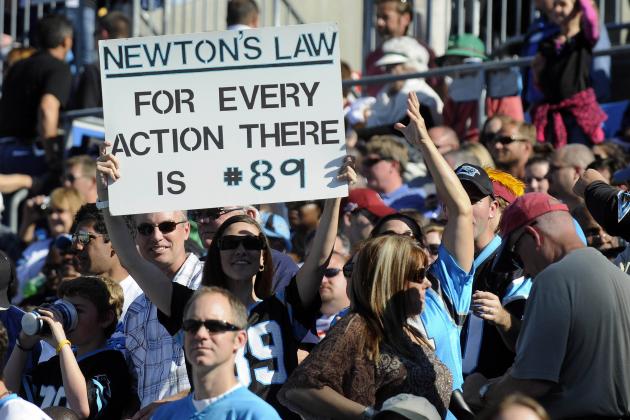 Like any professional sports team, the Carolina Panthers have their traditions and history that are unique to the team.  Their fans have uttered phrases or used nicknames derived from the players or fellow fans that have caught on and stuck over the years.

Carolina fans use these phrases as terms of endearment and to show a sense of pride or to voice their displeasure with the negative aspects of the team.

This slideshow will feature a few of those terms, names and the reasons behind them.  While some may be overlooked, fans are encouraged to fill the holes in the comments section.

Julius Peppers came to the Carolina Panthers as the team's first pick (second overall) in the 2002 draft.  Having played his college ball at the University of North Carolina, he quickly cemented himself as a fan favorite with his talents and freakish athletic ability.

It seemed he was destined to play his entire career with the Panthers until his contract was ready to expire and, in an interview with ESPN's Pat Yasinskas, stated he had no interest in signing a long-term deal with Carolina and wanted to explore his options in free agency.

2009 would prove to be his last in a Carolina uniform as he signed with the Chicago Bears in free agency.

Why the Panthers let a player of his caliber walk is unknown.  Perhaps they had no intention of paying him the money he wanted (even though he was offered a deal that would have made him the highest-paid defensive end that year), or knew they would never employ him in a 3-4 scheme like he had mentioned before.

What is known, is after Peppers left, he was instantly vilified by a fanbase that not only watched him play eight seasons in the NFL but saw him play as a standout collegiate defensive end.  Each time the Bears come to town, the Carolina faithful make sure Peppers feels their displeasure with him.

However, his departure opened the door for another gifted defensive end who is quickly leaving his mark with the team.

In the wake of Julius Peppers' departure, came the arrival of Charles Johnson.  Selected in the third round of the 2007 draft, the former Georgia product was to be a backup to Peppers and eventually progress to starting opposite of him on the defensive line.

However, that all changed when Peppers signed with Chicago and Johnson found himself a starter in 2010.  He didn't disappoint and did his part to make Carolina fans forget about his predecessor.

Johnson was one of several players locked up to a big contract following the end of the NFL lockout, especially when the Panthers felt they could potentially lose him to rival Atlanta.  He was offered a contract worth $72 million over six years.

Fortunately, he has lived up to the moniker and has been a force off the line during games.  The presence of Greg Hardy from the other side has helped take the focus off of him, but Johnson could still be in a position to really breakout.

That could be a real possibility in 2013 with the upgrades on the defensive line.  There is reason enough to believe Johnson can have a career year if the talented rookie defensive tackles are able to draw the double-teams away from him.

If that is the case, Big Money would have earned his paycheck and would be expected to continue producing similar stats.

Carolina fans are not short on phrases or nicknames when it comes to the team's defensive players, and Greg Hardy is no exception.  The Ole Miss defensive end has quietly come into his own with the Panthers, though opponents would argue that his emergence hasn't been that quiet.

While there were concerns about his character and possible off-the-field incidents, the Carolina coaching staff saw too much potential and talent in Hardy to pass on him.  So far, that move has paid off.

Panthers fans recognized just how good Hardy could be and began referring to him as "The Kraken".  Following the release of the movie Clash of the Titans, the famous line from that move began taking on a whole new meaning with the Carolina faithful, and now it's common to hear, "Release the Kraken!"

Hardy has relished in the new title and has gone as far as to dub members of the defensive front as Monsters, Inc.

There appears to be no signs of Hardy slowing down, and after having a big season where he had 11.0 sacks, he looks ready to build upon his recent success.

The Kraken and Monsters, Inc. should put a scare in opposing offenses and torment the dreams of their quarterbacks and offensive coordinators.

One staple of the Carolina Panthers fanbase is the singing of "Sweet Caroline" after a home win.  While the song may be the Neil Diamond hit, fans have a tendency to switch up the lyrics a bit and Caroline becomes Carolina.

When the Panthers claim a home victory, the music starts playing and the fans sing in unison.

There is a another song called "Sweet Sweet Carolina" that is part of the team's Black and Blue album.  However, that is not to be confused with the mega hit played in many stadiums across the country.

While the last name of Smith generally causes people to immediately nickname a person "Smitty," any Carolina Panthers fan will automatically think of the team's fiery wide receiver upon hearing it.  Steve Smith is the longest-tenured member of the Panthers and has been with the team his entire career.

The fans love him and were glad he decided to stay after there was trade speculation involving him in 2011.

Smitty has established himself as a fierce competitor and a threat to stretch the field.  He may not be as fast as he once was, but he can still burn defensive backs on any given play.

Recently, Smith had stated he would like to play for another two or three seasons which would allow him to retire as a Carolina Panther.  It seems that is a likely scenario and one that could later see him have his number retired by the team.

While he wasn't the flashiest person in the Carolina offense, he was one of the fans' favorite players before ending his career with the Panthers in 2009.  During player introductions and when he did something good on the field, fans would voice their appreciation with a resounding, "Hooovvv!"

He was able to carry the ball sometimes and even caught the occasional pass or two, but as a fullback his job was to block for the running backs or give Jake Delhomme a little more time in the pocket.

Brad Hoover may be gone and the chants for him may be no more, but his legacy lives on in the annals of Panthers lore.

Words cannot begin to describe the meaning behind the late Sam Mills' motivational words, "Keep Pounding."  They were delivered in a speech from him to the Panthers prior to their matchup against the Dallas Cowboys in the 2003 Wild Card Game.

The message was simply about overcoming adversity, and it was through this speech the team learned the true nature of Mills' personal fight against cancer.

No other words or statement carries the weight that Mills coined nearly a decade ago.

Veteran Steve Smith revealed what the words of his former coach meant to him, via Scott Fowler of The Charlotte Observer:

His speech was so impactful to me. Even nine years later, I remember it. You had a guy who had every opportunity to take pity on himself, to be like, ‘I don’t feel like dealing with this.’ And he opened up. And he made it about something else. Something bigger.

Carolina keeps those words close at all times.

"Keep Pounding" is inscribed on the wall of the training room and adorns the meeting rooms as well.  With Nike taking over as the sponsor of NFL attire, the Panthers jerseys have the slogan stitched inside the collar.

Sam Mills lost his battle to cancer on April 18, 2005 at the age of 45.  While he is gone, his legacy and his words continue to live within each and every Carolina executive, scout, coach, player and fan.