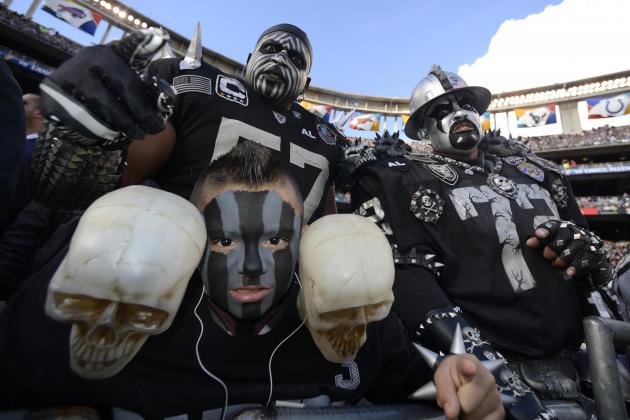 If there's any fanbase in the NFL that is immediately recognizable with by its attire, it's the Black Hole.

But what identifies Raiders fans beyond the spikes, face paint and costumes?

The easy answer is passion, but any fanbase would claim to be passionate—so what differentiates the Black Hole from everyone else?

Well have no fear, because we've identified five ways for you to know whether you're a true Oakland Raiders fan.

It's the easiest one of the bunch, and the most obvious mark of a true Raiders fan.

How does your stomach react to news of the Tuck Rule?

I remember being in a Mexican restaurant in Lake Tahoe when everything went down—from hearing the Oakland fans celebrating the fumble to the near riot that broke out in the bar.

To this day, even mention of the Tuck Rule makes me nauseous and ruins my day.

You in the same boat?

Consider yourself part of the crew.

I was once asked to rank my top five least favorite professional athletes (a task that's much harder than it seems) across all sports.

If Philip Rivers (or really any Chargers player) makes your list, I think that's an important qualification.

I know that teams become more and less hated within the AFC West throughout the years depending on who's winning games, but for me the Chargers have always been atop the list.

With Rivers, his arrogance and mediocrity have been the face of that hate for me.

LaDainianTomlinson seemed like too nice of a guy and no one else ever really stuck out—but Rivers made himself the poster child of lame.

Are you pissed that one of the greatest wide receivers in NFL history, the guy who is fifth all-time in receptions and yards, has yet to be inducted into the Hall of Fame?

Tim Brown, the Raiders' legend, didn't even make the final cut for the 2013 class despite posting better career numbers than both of the wide receivers who ultimately did make the class.

While most people believe Brown will eventually get in, it's kind of ridiculous it has taken as long as it has.

When news broke that Charles Woodson had re-signed with the Raiders, the first thing that ran through my mind was simple: "Where's my old Woodson jersey?"

Sure enough, right alongside my Jerry Porter jersey (yeah, yeah, yeah—it was a mistake), was trusty No. 24 in all its glory.

If the Woodson signing brought you an inordinate amount of happiness—joy that didn't necessarily line up with the promise of signing an aging defensive back—then it's a tell-tale sign of your membership in the Black Hole.

The final sign that you're an Oakland Raider fan is the butt of every joke your friends make: Are you calling for your kicker to come out from 70 yards?!?

Of any team in the league, there's surely no fanbase more confident in its kicker's ability to knock one home from deep.

In fact, I'd say there's nothing more exciting than Oakland starting a drive with just seconds remaining in the first half knowing there's a chance it could trot Janikowski out from 70.

Of course, Lane Kiffin is famous for lining up Janikowski from 76 yards out.

While that kick didn't work out so well, that hasn't lessened my desire for Janikowski to eventually break the record for longest kick in NFL history.

Now, this obviously isn't a complete and final list, but we're curious: What do you think makes a Raiders fan a Raiders fan?