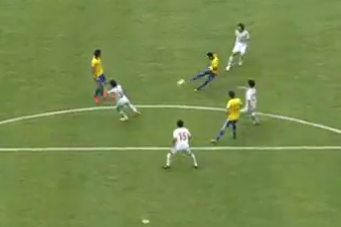 There was plenty of pressure on Brazilian wunderkind Neymar as his country kicked off the 2013 Confederations Cup against Japan in Brasilia on Saturday.

And it took all of three minutes for the 21-year-old Barcelona signing to bring some style and excitement to the proceedings.

Already at the tip of the announcers’ tongues for his skills on the ball, Neymar took a deft chest pass from teammate Fred at the top of the penalty area and blasted a right-footed shot past Japan goalkeeper Eiji Kawashima into the upper right-hand corner of the net.

Not only was Neymar's tally the fourth-fastest goal to start a match in Confederations Cup history, but it was a breathtaking start for the host country, which is under massive pressure to produce both on the pitch and off one year before it welcomes the World Cup next summer.

Brazil got second-half goals from Paulinho (48th minute) and Jo (93rd) and went on to complete a solid 3-0 win.

For a full recap of the Confederations Cup opener between Brazil and Japan, please follow along here with Jerrad Peters' live blog.

We'd like to send you the most entertaining Brazil (National Football) articles, videos, and podcasts from around the web.