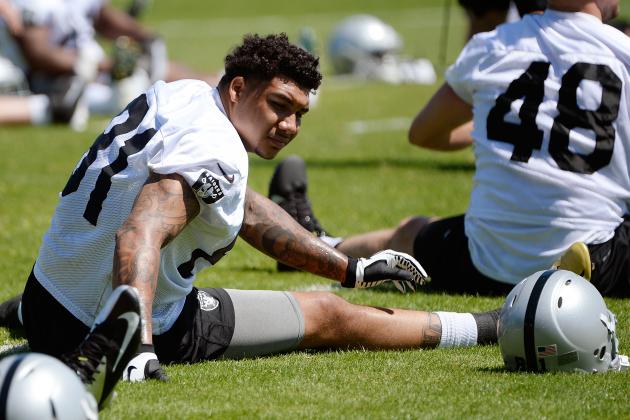 As a week of OTAs has officially come to a close, the Oakland Raiders are inching closer towards the regular season as the roster continues to take shape.

While the team didn't make any major moves since signing Charles Woodson, it's hard to believe this team is finished bringing in new players—something that should increase the competition in training camp.

With that said, as Oakland completed its week of organized team activities, we took a look at five guys who had a strong week and impressed the coaches.

With the departure of the mercurial Rolando McClain, the Raiders knew that middle linebacker was a position that needed some special attention.

As the "quarterback" of the defense, a team can live and die by the intelligence and ability of its middle man.

With all of that in mind, the Raiders came into camp with veteran Nick Roach manning the middle, and his short time in practice thus far has been impressive.

Aside from the fact that many believe he has the talent and experience to be an impact player this year (having played behind Brian Urlacher for years), what Roach has started to display is something almost as important as talent—leadership.

With the departure of guys like Tommy Kelly, Richard Seymour and Philip Wheeler, the Oakland defense was in desperate need of a guy who could command the team.

In a short week of OTAs, Roach seems to be becoming that guy.

Of course, Charles Woodson is another guy who will be a vocal leader of the defense, but Roach is showing that he's capable of filling that void when need be, as well.

With the quarterback position still far from locked down, the battle between Matt Flynn, Terrelle Pryor and Tyler Wilson figures to be one of the most intriguing in Raiders camp.

Thus far, Flynn remains the heavy favorite to open the season as the starter, but the rookie out of Arkansas is definitely showing he might make things interesting.

What has helped Wilson's case thus far has been the fact that Flynn has been equally inconsistent as he also adapts to new receivers and a new playbook.

While things are far from decided, the Wilson versus Flynn battle figures to be a fun one to watch throughout the preseason.

While very few starting positions are locked up in OTAs—especially among newcomers—one area of the field that Oakland is feeling more and more confident about is at defensive tackle.

With both Walker and Sims being signed in free agency, it was clear that the Oakland defense was going in a different direction than it had in years.

After years of struggling to stop the run, Walker and Sims have been brought in to do just that.

To make things even better, Dennis Allen has been outspoken about how impressed he has been with his new tackles.

Now obviously we must remember that both of these guys were signed for cheap and probably won't be making the Pro Bowl this year, but even the consistent ability to stop the run would be a huge upgrade in Oakland.

Well, Oakland fans might need to get used to the idea as undrafted free-agent Conner Vernon is already making quite the impression on coaches.

Vernon, the ACC's all-time leader in receptions and yards, was projected as a mid-round draft pick but fell out of the draft—likely due to his below average speed and size.

That said, however, the NFL has a place for guys like Vernon—see: Wes Welker, Danny Amendola, etc.

Another positive sign for Vernon is the track record Oakland has for developing late-round receivers or, in the case of Rod Streater, undrafted ones.

With lots of camp left to go, a guy like Vernon isn't fighting for a starting position; he's fighting for a job. If things keep going the way they have been, though, he could find himself among the team's final 53.

With most of the offensive line positions solidified in Oakland, the battle for the left guard position between Bergstrom and Nix figures to be an interesting one.

Bergstrom, the team's third-round (and first) pick of the 2012 draft, would seem to be the favorite while competing against Nix, an undrafted free agent out of Pittsburgh last season.

That said, once a guy is on the roster, where he was drafted has little meaning to coaches.

The only thing that matters here is which guy has a better chance of helping the team win.

For Oakland, the competition at left guard will most definitely be a good thing, as it pushes both guys to improve throughout the next few months.

I think both of these guys are capable of doing a solid job at left guard, and it's going to come down to which guy wants it more.