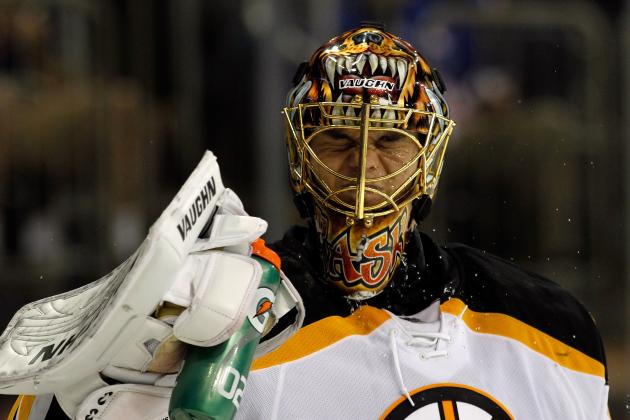 It was like watching the air go out of a half inflated balloon.

When Boston scored another power play goal in the second period, it was as if they were taunting the hapless Blueshirt PP squad. Tory Krug looked at the bench in triumph. The listless crowd at the Garden got even quieter.

Jeremy Roenick had previously called out the fans at MSG during the first intermission. NBC's commentator said both the fans and the Rangers had given up, saying "Everybody knows this series is over."

And then the big bad Bruins made it 2-0 on Krug's goal. Despair seemed to palpably crush New York. Even with the brilliant goaltending from Lundqvist, things seemed to be over. The B's had been outplaying Ranger skaters easily all night.

So naturally, that's when things got weird.

Carl Hagelin tried to broach the Bruins blue line and ended up wearing the Boston defense like a shirt. Hagelin desperately tried to shovel the puck ahead to the slot. Tuukka Rask anticipated the puck and stretched out to corral it.

However, Hagelin hadn't got a lot on his attempt and the puck wandered instead of rocketing as Rask expected. The surprised goalie tried to compensate, slipped up and could only watch helplessly as the puck trickled into the net.

Madison Square Garden exploded. Fans went nuts. Things got noisy. And the Rangers woke up. For the first time in the series, let alone the game, New York began launching sustained attacks. They cycled the puck. They took shots. They had jump. Instead of Boston pounding on the Rangers, the teams were now trading blows.

We had a game.

In the third period, the Rangers did not wait long to even things up. Derek Stepan stripped an unsuspecting Zdeno Chara behind his own net and transitioned it to a wraparound goal. Tie game at 1:15.

New York followed this up with a penalty a few moments later. Not a good idea, with the Bruins PP rolling as strong as it was. After some absolutely stellar saves by Lundqvist, Tyler Seguin buried Boston's third goal with the extra man at 8:06.

No problem for the Rangers. Brian Boyle followed up with his own power play goal not even two minutes later. New York actually made a power play work. Sightings of pigs with wings were reported in Herald Square directly thereafter. It was not to last. The subsequent Ranger power play came up empty.

The score stayed knotted at three apiece through regulation time. There would be overtime. Good news for Boston. New York was snake bitten in OT and not just in the series but in their entire playoff run.
Lundqvist and Rask set their jaws. Callahan and Jagr began stepping up. Like two weary behemoths, the teams slugged each other. Breath-taking chances and solid saves peppered the extra period.

And then it was over.

Rick Nash fed Chris Kreider in the slot, and the kid tipped it past Rask. The Garden went nuts. The balloon re-inflated. The Rangers' season lasts at least one more game.

Can New York come back? Chances are slim. But if they are going to have to do such a thing, Boston appears to be the opponent to do it against. The Philadelphia Flyers overcame the same deficit in 2010. And only the Leafs' epic collapse in Game seven in the first round prevented an almost as epic collapse on the Bruins' part.

Either way, this series has gotten interesting. If the Rangers can keep their power play working they will be hard to kill. Just goes to show you can never count a team out. Ever.

We'd like to send you the most entertaining Boston Bruins articles, videos, and podcasts from around the web.