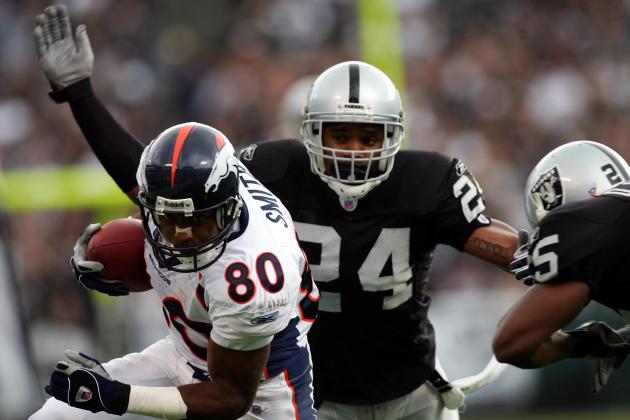 For months, veteran cornerback and Oakland Raider great Charles Woodson waited for his phone to ring.

In the months since the season ended, Woodson had received just one call: from the San Francisco 49ers—something that seemed odd given the veteran's incredible career.

Of course, some believe the 36-year-old could be at the end of his rope, but to think that he couldn't help anyone seemed crazy.

For Raider fans, the prospect of adding the former No. 4 pick seemed like a dream scenario—both in that it would be magical and unlikely.

Things would only get worse, however, as rumors surfaced this morning that the latest team to contact him was none other than their division rival, the Denver Broncos.

With a meeting scheduled for Wednesday, Raider fans began to wonder if this saga could reach a new low.

But then, a glimmer of hope.

ESPN's Josina Anderson tweeted that not only was Oakland interested, but that they had actually submitted an offer already.

Charles Woodson's agent Carl Poston also told me the #Raiders just sent him an initial offer for Woodson as well.

So the Raiders are upping the ante a little bit sending an initial offer for Charles Woodson already, but do the dollars make sense?

With Woodson announcing last week that he was no longer interested in restricting his potential employers to contenders, the move to Oakland made all too much sense.

It offered Woodson a chance to return to where his career began, to fill an immediate need (free safety) and even reunite with Reggie McKenzie, a member of the front office during Woodson's stint in Green Bay.

Now obviously this story is far from finished, but at the very least it's nice to know that Oakland is in the mix. As Anderson points out, the big question is whether the cash-strapped Raiders have the resources to lure Woodson in, especially if contenders like Denver are interested.

Whether that means No. 24 returns to the silver and black this season? I guess we'll have to wait and see.