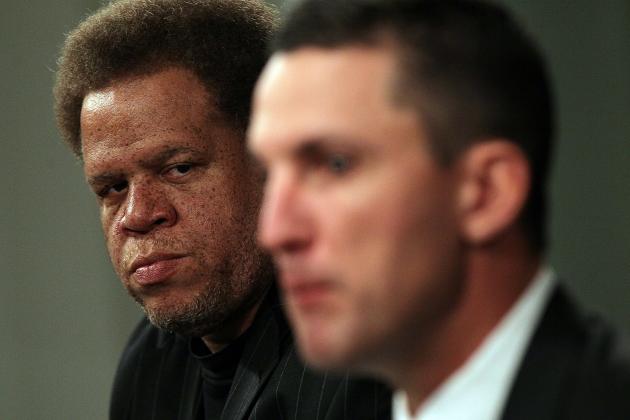 When we look at the 2013 Oakland Raiders roster, one thing we can't say about general manager Reggie McKenzie is that he didn't try.

With a salary cap situation as bad as anywhere around the league, McKenzie has done an admirable job at finding "value-level" talent to fill out the roster for the upcoming season.

Add that onto the successful draft, and the Raiders of 2013 look far more competitive than many people would have ever expected.

Now, obviously, this isn't a team that will be competing for a Super Bowl this year, but they've done a great job of preparing themselves for 2014 with a ton of cap space and some solid young players.

With that in mind, as the 2013 season is just around the corner, we took a look at some remaining free agents who Oakland could target to complete the roster heading into mini-camp.

In Oakland, the running back position is one of the most puzzling.

On one hand, the Raiders have Darren McFadden, arguably the best player on the roster.

On the other hand, however, the Raiders have Darren McFadden, the most injury-prone player on the roster.

With the signing of Rashad Jennings set to shore up the backfield, a guy like Felix Jones could be another nice addition to compete in training camp.

Jones, who played behind McFadden at Arkansas, could provide a dynamic second back that might even be able to take a bit of the load off of McFadden's shoulders.

The downside to Jones is that he's had the same checkered health history as his college teammate.

Like running back, the wide receiver position isn't exactly a position of need in Oakland.

That said, the young guys the Raiders do have could definitely use a proven veteran to show them the ropes and to take the pressure off of them in the short term.

The concern with Lloyd is whether his cost would fit into Oakland's plan (it's likely it wouldn't), but he would be the perfect piece to compliment the offense McKenzie and Dennis Allen have constructed.

I'll admit, I'm a little biased towards Edwards ever since I read this about him.

That said, Edwards would surely come at a price within Reggie McKenzie's budget, and he would also probably be fine signing a one-year deal.

With that in mind, Edwards provides the big-bodied player that Oakland is desperate for alongside the smaller speedsters like Denarius Moore and Jacoby Ford.

If Edwards could rekindle anything like that he showed in Cleveland years ago, he could be a nice piece in Oakland.

Also keep in mind that he played in Seattle with Matt Flynn last season, which could be a nice security blanket for Flynn.

If there's one position on offense that Oakland is in desperate need of help, it's obviously tight end.

While Rosario isn't a name many are familiar with, he has been productive in both Carolina and San Diego in backup roles.

In Oakland, Rosario could find a chance to start for one of the first times in his career, instead of playing behind a guy like Antonio Gates.

He also seems to fit the "low-cost" model McKenzie is going after, as a guy like Rosario wouldn't command much more than the minimum.

Come on, you didn't think I was serious did you?

With four quarterbacks already on the roster (including Kyle Padron, the undrafted free agent from Eastern Washington), it's hard to imagine Oakland signing another guy to throw into the competition.

If anything, Oakland would go after a proven veteran who is okay with mentoring the younger guys like Flynn, Terrelle Pryor and Tyler Wilson.