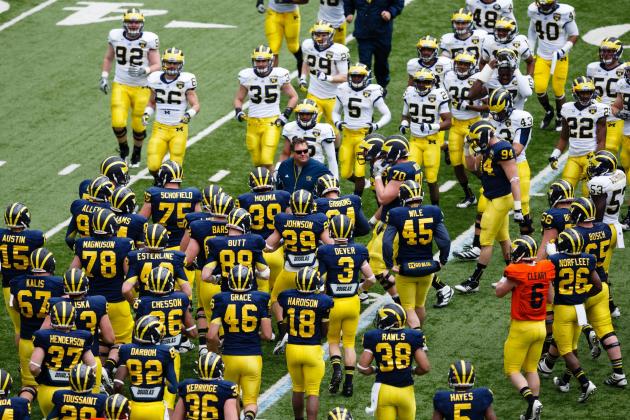 Six young men were lucky enough to graduate high school early and enroll at the University of Michigan.

These six freshmen took part all throughout spring practices, eventually allowing the public to get their first glimpses of them in the spring game.

So how did these men perform throughout spring ball? Here's a closer look at them and what can be expected out of each this fall.

Kyle Bosch actually appeared with what looked like a cast on one of his arms in the spring game.

Not surprisingly, though, there was absolutely no mention of it from this staff, as they simply refuse to discuss injuries.

Some seem to think Bosch could contribute this fall, but I think predicting that he redshirts would be the safer bet right now.

This is especially true after seeing the way all four of the freshmen offensive linemen surprisingly redshirted last season.

Bosch may be a stud somewhere down the road, but not quite yet in 2013.

Logan Tuley-Tillman is in a similar boat as Kyle Bosch. Both men would be well suited to redshirt this season, Tuley-Tillman even more so.

The knock on him coming into this year was that he was extremely raw and there really hasn't been anything to disprove that.

He has a great body type, standing 6'7" and weighing over 300 pounds, but needs to iron some things out.

Potential contributions from Tuley-Tillman seem even further down the road than from Bosch.

Jake Butt actually caught a touchdown pass in Michigan's spring game. Is this a sign of things to come? Possibly.

There is no doubt that Devin Funchess and A.J. Williams are ahead of him on the depth chart, but Butt should still see plenty of time this fall.

He is too talented and too physically gifted to remain off the field. Hopefully he can show the ability to catch passes and block at a high level, making him even more dangerous.

Funchess and Williams each specialize in one of the two areas, but hopefully Butt can excel in both.

Once thought to be a safety all the way, it looks like Thomas may have found a new home in this secondary.

In fact, if Courtney Avery winds up practicing full time at cornerback again, Thomas could actually be the first defensive back on the field in passing downs.

It's only a matter of time before he becomes a fixture in this Michigan secondary. We knew he was going to play a role on this defense here in 2013, the only question is how big of one?

As mentioned in the previous slide, Courtney Avery's presumed move back to corner only adds to a position that was already loaded for the Wolverines.

Plus, Delonte Hollowell's surprising emergence makes the competition even stronger. That would seemingly spell "redshirt" for freshman Ross Douglas, but that's not necessarily the case.

Douglas was not highly touted out of high school for no reason—he's extremely talented and knows how to play. This was evident by the amount of reps he received in the spring game.

Still, one would assume he's definitely sitting behind Blake Countess, Raymon Taylor and Courtney Avery for sure on the depth chart, and probably Terry Richardson as well.

Again, though, you can never have too many able bodies at a position, as injuries are always lurking. Honestly, I think it's a tossup right now on whether or not Douglas redshirts.

My gut tells me he won't, but it could easily go either way.

Taco Charlton is already physically gifted enough to make an impact on defense, standing 6'6" and weighing 265 pounds. Odds are that he'll work his way into the defensive end rotation this fall.

Michigan has many ends competing for playing time, making the competition at the position as intriguing as we've seen in a long time.

Is Charlton going to be a dominant force this year? No, probably not. But it wouldn't be surprising if he becomes a terror off the edge in the near future.

Ask Michigan's quarterbacks what they thought of him in the spring game, as he collected two sacks. The quarterbacks were supposed to be off limits to hit, but Charlton got plenty of contact both times.

Sounds like he has a mean streak to him, which is exactly what you want as a coach at that position.