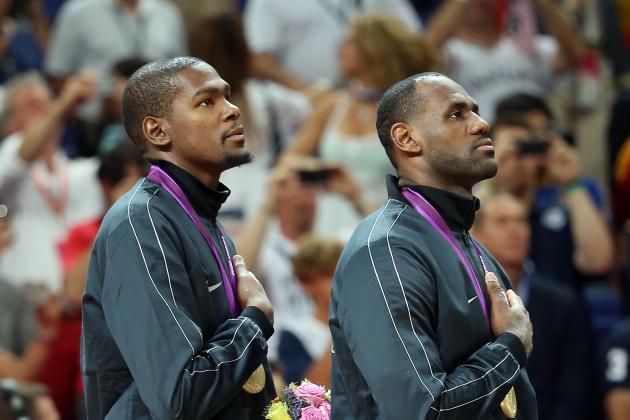 There are six days left in the regular season, and with MVP (LeBron James) and Rookie of the Year locked up (Damian Lillard), some of the usual debates lack interest. But it should be compelling to debate who should be in the All-NBA teams.

The NBA picks a first, second and third team. Historically, the league is not rigorous about keeping one point guard and one shooting guard, and one small forward and one power forward on each team, but rather takes the best two guards and the best two forwards. I actually think they should stick more rigorously to the five traditional positions, but I think that there should be flexibility when it comes to “bigs,” as there is in the actual games.

Tim Duncan and David Lee, for instance, are always thought of as power forwards, but both play plenty of center. I say, honor the best possible players for each team, as long as each choice can legitimately play the position listed. (The same flexibility allows you to have the two best forwards on the first team, since LeBron can legitimately play the power forward position.)

Though these are individual honors, winning should matter. The stats of players on great teams are suppressed because they have to share the load more and because opponents give them their best efforts, whereas players on bad or mediocre teams can have inflated stats because it’s their show and because of loosely contested, meaningless games.

Durability should matter. Sorry Kyrie Irving and John Wall, but you guys have missed too many games to earn these honors. Maybe next year.

A few remarks on my choices: I don’t think Dwight Howard should be on any of the teams. The Lakers trainwreck was somehow honored with two starters for the West in the All-Star Game. That should not be repeated for the All-NBA teams. Kobe is probably going to be a first-team selection, though I think it should be Harden. Howard should be out.

Obviously Carmelo Anthony has been on an incredible scoring streak, but the honors should be for the whole season, not the last couple of weeks. Kevin Durant’s numbers are decisively better and the Thunder are a better team than the Knicks, so Anthony should definitely be second team. A couple of spots could easily change in the next six days. For instance, I could see Westbrook switching places with Paul, so we’ll have to keep an eye out.

Here are my predictions (on the left) and my own choices (on the right). What does everyone else think?