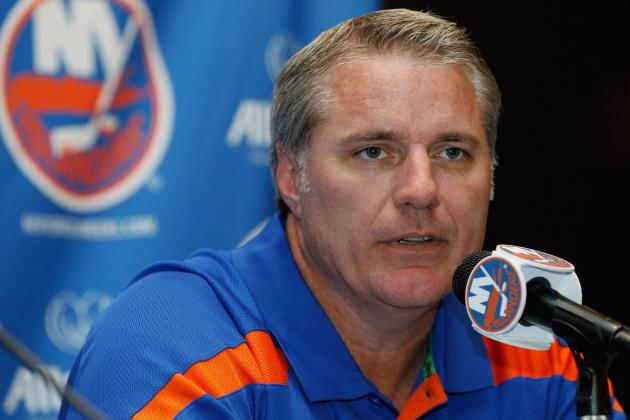 Garth Snow has only been in a genuinely competitive position at the trade deadline once before in his tenure as New York Islanders general manager.

That was in 2007 when he acquired Ryan Smyth. It was a gutsy move that made sense since he didn't give up much for Smyth. Had he been able to sign Smyth to an extension, Islander history would be very different. When Smyth went west, the rebuild was inevitable.

This time around trading picks and prospects for a player who might only be a rental does not make sense. There are, however, needs that should be addressed.

The Isles could certainly use a second line center. Having one would make their offense much more deadly as opposing defenses wouldn't be able to just key on the Tavares line. The problem is that Derek Roy and Mike Ribeiro are the only two likely options out there and both would require a heap of assets. With Ryan Strome likely to make the team next year, that seems like a questionable investment.

More critical for the Isles is the lack of a viable backup goaltender to Evgenyi Nabokov. Nabby is 37 and has struggled this year after a respectable season last year. On most contenders, he'd be a backup.

I am not sure whether Snow thought Kevin Poulin was closer to being ready than he was or that Rick DiPietro would be more reliable than he has been since 2008. Either way, it was probably a mistake to let Al Montoya walk last summer and not replace him.

If Snow could convince Tim Thomas to come out of retirement, that would solve the problem—assuming Thomas could get ready in one or two weeks at the Islander AHL franchise in Bridgeport, CT. Betting the Isles' first shot at the playoffs since 2007 on that, however, doesn't make a lot of sense

Should the Islanders trade for Ben Bishop prior to the trade deadline?

Should the Islanders trade for Ben Bishop prior to the trade deadline?

As everyone in the hockey world knows by now, DiPietro is not a viable option. He has played tolerably well since being passed through waivers to go to the AHL, but relying on him as backup would be incredibly risky at best.

At the moment, the Isles are using prospect Kevin Poulin as backup. Several years ago, Poulin looked like he was on the fast track to the NHL with incredibly good save percentage stats. Then, however, his skates hit a rut in the crease ice and he fell.

The resultant injury to his knee required surgery and he hasn't been the same since. His few NHL starts have painfully demonstrated that he belongs back in the AHL finding his mojo.

Anders Nilsson, the other major Isle goalie prospect in North America, has also taken a step back and needs to develop. The only Isles goalie prospect who seems to be prospering is Mikko Koskinen and he is playing in the SM-Liiga.

Both Roberto Luongo and Ryan Miller have been mentioned as possible trade targets but would both require substantial assets and are in their early 30s. Its possible that Snow could pull a rabbit out of his hat and obtain a quality backup for a late round draft pick as he did with Montoya, but I am not holding my breath.

Ben Bishop makes a spectacular save

I like Jonathan Bernier, but he may not be available. If he is, LA Kings GM Dean Lombardi has made it clear that he will require a viable backup for Quick as part of the compensation package—which would be steep. The Isles would have a better and younger starting goalie, but, since they would have to ship Nabby out, they would still need a backup.

The one trade target who seems to make sense for the Isles is Ben Bishop. It is a little questionable as to whether he will be available as Ottawa starter Craig Anderson has been out with an injury.

Anderson, however, seems to be about ready to return as he has been skating with the team. With Anderson back, Ottawa can afford to part with Bishop as Anderson and Robin Lehner have also been quite good in net.

What would it take to get Bishop assuming he is available? Ottawa has had an unbelievable run of injuries and could use either Brad Boyes or Lubomir Visnovsky who are both set to be unrestricted free agents this summer.

Both players have, however, been vital cogs in the Islanders' success as well, so Snow may prefer to offer a package of draft picks to Ottawa comparable to that which the Tampa Bay Lightning offered the Nashville Predators for Anders Lindback.

Follow New York Islanders from B/R on Facebook and get the latest updates straight to your newsfeed!

We'd like to send you the most entertaining New York Islanders articles, videos, and podcasts from around the web.