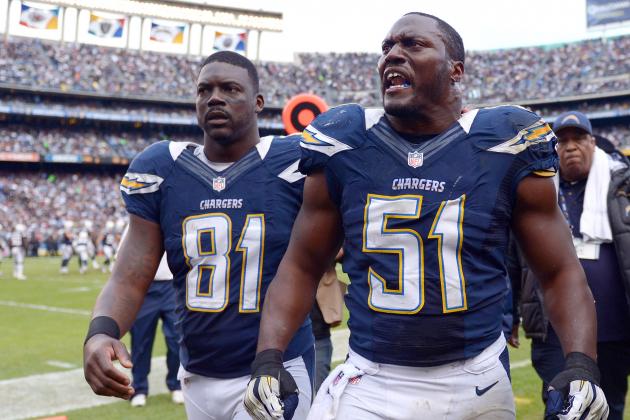 In an attempt to free up salary cap space, the San Diego Chargers have released veteran linebacker Takeo Spikes.

Spikes, a 15-year veteran, signed a three-year, $9 million contract with the Chargers in 2011 according to spotrac.com.

The Chargers will now have more room to make moves this offseason, as Spikes' departure will free up $3 million in cap space.

San Diego is now $10.2 million beneath the 2013 NFL salary cap set at $123 million this season, according to a report from UTSanDiego.com.

With the release of Spikes before his contract expired, the Chargers will incur a $700,000 hit on next year's salary cap.

During his long career, the one thing that has eluded Spikes was playing on a team that would be playing in the postseason. He thought his chance for a trip to the promised land would come in San Diego; unfortunately, it fell short.

It wasn't because Spikes wasn't a good player; it was because the team around him failed to produce. He is a great player, having made two trips to the Pro Bowl during his time with the Buffalo Bills.

He was praised by former head coach Norv Turner and current defensive coordinator John Pagano as being a player-coach, that he had the ability to mentor teammates around him. He won the Chargers Most Inspirational Player award both years he was with the team.

Spikes played with a consistent passion for the game.

I understand the move, the Chargers' need to clear cap space and that Spikes was the first victim, but I don't agree with the Chargers looking to Spikes' replacement, 2011 second-round draft pick Jonas Mouton.

Mouton, who was a surprise pick by former general manager A.J. Smith, has yet to show any ability to be a NFL-caliber linebacker. In his two years with the Chargers, Mouton has spent a majority of his time nursing injuries.

With Spikes' departure, does this signal the first of many more moves to come?

It was reported via Twitter by NFL.com's Ian Rapoport that the Chargers were also going to release veteran nose tackle Antonio Garay.

Sounds like the #Chargers are heading toward releasing veteran DT Antonio Garay, per source. Due $3.5M in 2013. DE for a 3-4 team

Kevin Acee of the San Diego Union-Tribune also confirmed that the Chargers were set to release Garay.

According to a report from the San Diego Union-Tribune, the Chargers had been open to restructuring deals of players currently under long-term contracts; however, in light of recent events, it looks like releasing certain players might be more feasible in the end.