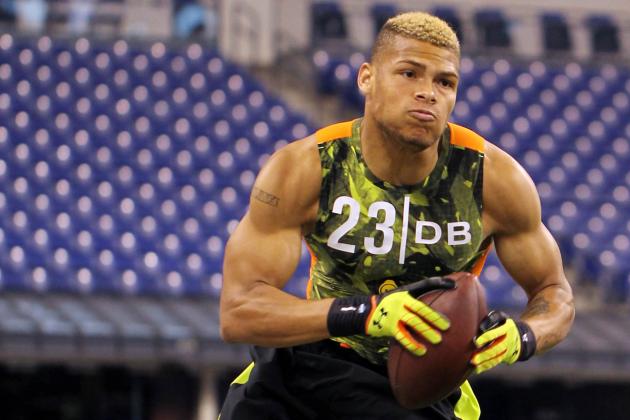 The combine is over and the 2013 NFL draft is less than two months away.

General manager Reggie McKenzie and head coach Dennis Allen have their share of homework to do by evaluating the talent they saw in Indianapolis.

This is McKenzie's first year with a healthy amount of draft picks.

Here is where the Raiders' mock draft stands now that the NFL combine is in the books.

All combine statistics courtesy of NFL.com.

Bjoern Werner fills that huge void on the Raiders' defense: a young, athletic pass-rusher that brings excitement to a defense that struggled mightily last year.

Werner was in the top half of nearly every category at the combine, including a 4.83 in the 40-yard dash.

With Star Lotulelei's draft stock dipping by the hour, Werner remains a top prospect for the Raiders.

The Honey Badger has made quite an impression in this year's combine, (except for the bench press) and the Raiders are in desperate need of a cornerback.

He ran a 4.50 in the 40-yard dash and had a vertical jump of 34 inches, both of which were higher than Rutgers cornerback Logan Ryan, who I've been big on from the get go.

Hopefully Mathieu can keep his bad habits in check and get a bit stronger in the process.

Now that Desmond Bryant has found himself in hot water, it's still to be seen if the Raiders will bring him back next season.

Everett Dawkins was a solid defensive tackle at Florida State and is projected as a Day 3 pick in this year's draft.

Though his combine times aren't mind-blowing, he still possesses the skill set to cause trouble for offensive lines.

With quick feet and a great first step, Dawkins could make for a great defensive tackle for the Raiders next year.

The Raiders need to start thinking about getting another running back for when, not if, Darren McFadden gets injured again.

Knile Davis didn't have staggering numbers while at Arkansas, but man did he impress at the combine.

At 5'10'', 227 pounds, Davis' ability to run north-south make him a threat in Oakland's return to the power blocking scheme.

Gragg had a very impressive combine by being a top performer in four of the six events he participated in, including his 4.42 40-yard dash and his 37.5 inch vertical jump.

He isn't the strongest blocking tight end in the draft, but his thick 6'3'', 246-pound frame makes him a great target for short passes.

I've been big on Michael Mauti for a while now, even though he didn't participate much in this year's combine.

He isn't the fastest linebacker, but he has a strong football I.Q. and can make the routine tackles the rest of the Raiders failed to make last season.

Mauti had 28 reps at the bench press, which was one of the best in his group.

At 6'2'', 243 pounds, Mauti would be another young and instinctive linebacker for the Raiders.