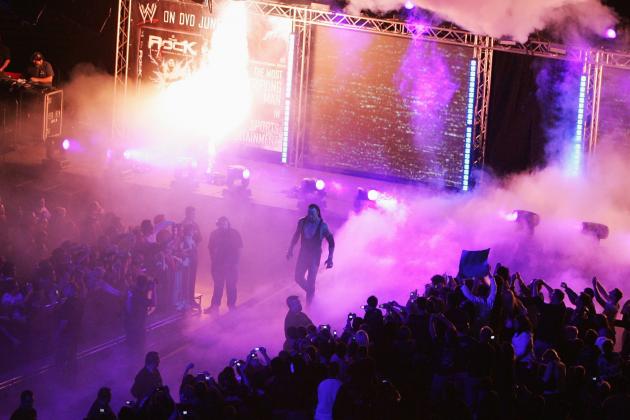 Gaye Gerard/Getty Images
What Would WrestleMania be Like Without a Classic 10 Minute Entrance From The Undertaker?
6.6K
Reads
53
Comments

We all know the Undertaker's legacy, which he has already set in stone. His work for the WWE will go down as the most dominant, consistent and memorable of all time.

He has eight world championship reigns, and his 20-0 record at WrestleMania is untouchable.

I grew up watching the mysterious figure walk down to the ring with his purple gloves and menacing manager, Paul Bearer. It's hard to believe that now  "The Deadman" is creeping up on being 50 years old.

So how in the world is a 47-year-old still the most talked about person heading into yet another WrestleMania?

Well, it's quite simple.

The Internet Wrestling Community and wrestling fans in general hate change, bottom line. WrestleMania without the Undertaker is like pizza without the dough .

Last time that WrestleMania had a card without the Undertaker was WrestleMania 2000 (XVI), featuring The Rock vs. Triple H vs. Mick Foley vs. The Big Show in the main event.

The Undertaker has only missed two WrestleMania events in the last 23 years.

As a wrestling fan, you get attached to certain people and the ways that things are handled. Think about the start of the "PG era." You couldn't find a message board without finding a thread dedicated to the tameness of the WWE, when compared to the way things used to be.

Getting every possible drop out of main-event superstars is something that we have all seen happen time and time again—Ric Flair, Mick Foley, Shawn Michaels, Hulk Hogan and now The Undertaker.

Sometimes, the fans complain about WWE forcing old-timers down our throats—truth is, they are doing it for the us (the fans).

The Undertaker has been battling injuries and a deteriorating body for years, while still maintaining the highest level of performance. He has had shoulder and hip surgery since competing last.

At WrestleMania 28, last year's event, the Undertaker and Triple H fought it out for over 30 minutes inside of the brutal Hell in a Cell.

The two WrestleMania cards prior against pitted him against fellow icon, Shawn Michaels—won the Slammy and Wrestling Observer Match of the Year.

So, the argument that the Undertaker still can't compete at the highest level is completely out of the question and needs to be deleted from the minds of anyone questioning it. Every time you think the man is done, he does it again and wows us all.

That wow factor the Undertaker brings is unmatchable.

What will be missed most, though, is the emotion that the Undertaker brings to the "Grandest Stage of them All."

I'll never forget the reaction and the overall emotion that the crowd had invested in the match Batista vs. The Undertaker. Every time that Batista would score a near-fall, the 80,000-plus people in attendance would let out a collective sigh of relief.

How will WrestleMania survive and move on inevitably without him?

There is no doubt that it will be missing its most familiar and crucial piece. It won't feel right at all, and the IWC will need some answers on to why "The Phenom" wasn't active if he is unable to compete at WrestleMania 29.

It is most certainly too early to completely rule him out, as one of the most beautiful things about pro wrestling is its unique surprises.

I would love to see the Undertaker take as much time off as he needs in order to see him on the card for WrestleMania 30.

The main thing to focus on for the WWE is to make sure to put out a sensational card for the fans.

This situation will be impossible to overlook and if this is a subpar show in the least bit, the fingers will be pointed at WWE for not having a legitimate backup plan for the Undertaker not being able to compete.

Only time will tell what the future holds.

I hope that for once we can just be thankful for everything the Undertaker has done in his career, instead on focusing on what he isn't giving us.

His legacy is untouchable whether he steps in the squared circle again or not. I might not be as crazy about this fascinating world as I once was, but no matter what happens I will never forget the Undertaker and everything he went through to keep his fans entertained.