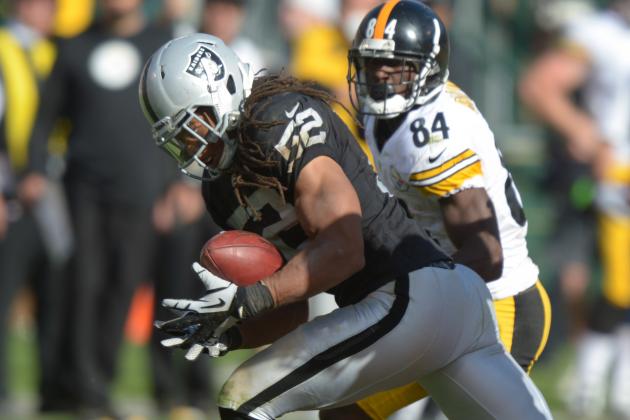 The Oakland Raiders find themselves in desperate need of the franchise tag for next season.

Unfortunately, they may not even have the cap room to franchise tag anybody.

Oakland has 17 unrestricted free agents that are on the market, and a few of them were the lone bright spots to a very disappointing 4-12 team last year.

Here are the three Raiders who have proven to be worthy of the team's franchise tag.

Oakland's best defensive player in 2012 was linebacker Philip Wheeler. Not only was Wheeler reliable, he possessed the heart and character of a Raider that must be back on the field next season.

Wheeler only made $700,000 last season, but he is one of the hot commodities in a weak free-agent class of linebackers.

The average price for linebackers next season is nearly $9 million, which would be a huge pay day for a guy that made less than $1 million last year.

Wheeler was without a doubt Oakland's best defensive player last season by recording 109 tackles and forcing two fumbles, but is he really worth $9 million?

When Richard Seymour went down with a hamstring injury in Week 8, defensive tackle Desmond Bryant excelled as his replacement.

Kelly is scheduled to make over $11 million next season if he isn't cut. Bryant should get paid.

The current going rate for defensive tackles is $8 million, and Bryant is a prime candidate to get the franchise tag for next season.

Who should get the franchise tag?

Who should get the franchise tag?

Tight end Brandon Myers exploded for a career year in 2012 by finishing with over 800 yards to lead the Raiders in receiving.

Myers made less than $600,000 last year while being the most dependable target for quarterback Carson Palmer.

Despite his great hands, Myers was known for his poor blocking, and it's difficult to tell if he will have the same success with a new offensive scheme in Oakland.

The franchise tag number for tight ends is nearly $5.5 million, which is still only half of what Darrius Heyward-Bey is scheduled to make next season.

Without Myers being the security blanket for Palmer, the Raiders offense would not have put up even the mediocre numbers it did.

And that's saying something.