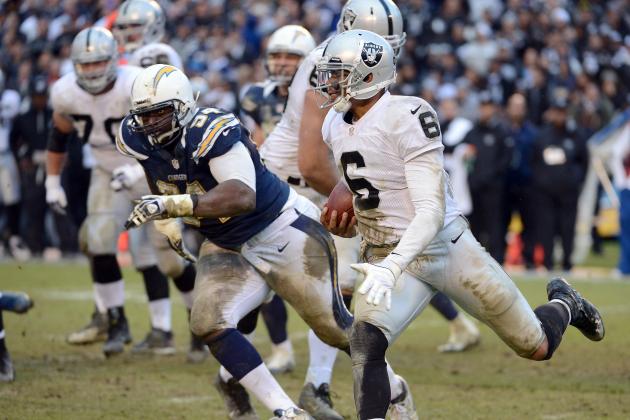 When people are guessing, they say a lot of crazy things.

To be fair, a lot of what I'm about to say is guesswork. The difference, however, is that I'm going to admit that it's guesswork instead of implying that it's coming from a place of knowledge.

Among the Raiders' rumors circulating this week is one in which they are considering dumping Carson Palmer in order to free up salary cap space. In doing so, of course, the reigns would be placed firmly in the hands of Terrelle Pryor.

Regardless of your opinion of Pryor, however, I think we all have to admit one thing: Nothing the Raiders' have done seems to back up this idea.

Consider this: If Oakland was really planning on cutting Palmer loose (and give the front office some credit here, because this isn't a decision they would have been oblivious to until this week), do you really think head coach Dennis Allen and general manager Reggie McKenzie would have waited until week 17 to give Pryor some experience?

Remember, we're talking about a team that was eliminated from playoff contention with well more than one week remaining in the season.

Now, given, I think Pryor looked fine in that regular season finale, and I think he could have a bright future ahead of himself, but distancing yourself from Palmer (if you're Oakland) makes absolutely no sense.

While the NFL is a league of youth, the quarterback position isn't one a team should take a major gamble on unless they have no choice. Remember that if Palmer leaves, there's a decent chance the Raiders' quarterback situation could resemble that of the Kansas City Chiefs.

I think the point in all of this, however, goes beyond Palmer and Pryor into our role as fans in the whirlwind that is the NFL offseason.

While it's a time of guessing and optimism and predictions, all of which are good, we need to remember to think rationally and be weary of what we read and believe—and who knows, maybe what happens in the end will defy all logic anyways.