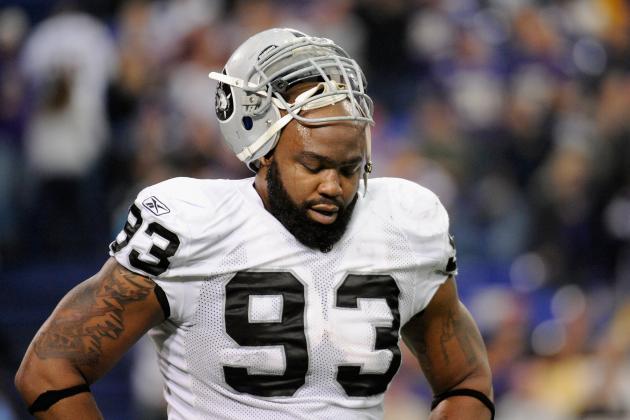 As Reggie McKenzie begins his second offseason as the general manager of the Oakland Raiders, several issues must be addressed before September rolls around.

Oakland isn't as financially strapped as it was last year, but the team still needs to rebuild while dealing with the bloated contracts left behind by Al Davis.

The Raiders are now under the $121 million salary cap, but there are still players who must restructure their contracts or they will be cut.

Here is a breakdown of where the Raiders stand right now with their salary cap situation.

After restructuring his contract last offseason, Carson Palmer is due $13 million next season.

Granted, Palmer was the saving grace for last year's abysmal offense, but tying up that much money into one player when the team is already struggling financially is dangerous.

If Palmer doesn't take a pay cut, it's very likely the Raiders will cut him and either look for an expendable quarterback in free agency, or build around Terrelle Pryor.

The Raiders would not have gotten four wins without Palmer, and that's saying something as to how bad they really were last year.

Palmer was solid last year, but he's not worth $13 million.

The Raiders' most dangerous player is due for a cap hit of nearly $10 million next season.

When healthy, Darren McFadden is worth the money the Raiders are paying him. Unfortunately, McFadden has yet to play more than 13 games during any season since coming into the league five years ago.

Marcel Reece flourished as the starter when McFadden got injured, and he is only due $1.4 million in 2013.

Oakland doesn't have a second-round pick in this year's draft, and dealing McFadden for more draft picks wouldn't be a bad move.

The only problem will be finding a team willing to trade enticing draft picks for an injury-prone running back.

Brandon Myers was Oakland's most consistent player last season and he became one of the NFL's most impressive tight ends.

Myers made less than $600,000 last season, but his free-agent status makes him a hot commodity after finishing with over 800 yards receiving in 2012.

He is sure to get looks from other teams, and depending on what he asks for, the Raiders would be wise to hold on to him.

If not, a young David Ausberry will be ready to take over as the starting tight end.

Darrius Heyward-Bey's ridiculous contract weighs the team down on the salary cap as he's set to make over $10 million next season.

Not a bad payday for a guy who only had 600 yards last season.

While Denarius Moore and Rod Streater are making significantly less money, Heyward-Bey must restructure if he wants to stay a Raider.

It's not his fault he was another product of Al Davis' bloated contracts for unproven talent, but the case remains that Heyward-Bey is killing the Raiders' cap.

Mike Brisiel and Khalif Barnes were major disappointments for the right side of Oakland's line last season.

Barnes is a free agent and the Raiders would be wise to let him walk and either pick up someone cheaper in free agency or draft a right tackle who can actually block. Brisiel, on the other hand, will make over $5 million next year.

I didn't see anything from him last year worth paying $5 million for.

Jared Veldheer and Stefen Wisniewski were the unsung heroes for Oakland's offensive line in 2012, and the Raiders are getting them for cheap.

Cooper Carlisle is 35 years old and is a free agent, and the Raiders need to let him go and use Tony Bergstrom at left guard next year.

Two of Oakland's highest-paid players are Michael Huff and Tyvon Branch, the leaders of the secondary.

2012 was a forgettable season for the Raiders' defensive unit as they gave up touchdowns at an alarming rate.

The team needs to part ways with Matt Giordano and let Huff return to his natural position at free safety. Oakland must draft a cornerback with the third-round pick to give the defense some sort of hope for next year.

There are several free agents that would make a huge impact on Oakland's secondary unit, but it's unlikely the Raiders could afford any of them given their salary cap situation.

They must build through the draft to fix these problems.

Miles Burris and Philip Wheeler were both great for Oakland last season as the two linebackers finished as the top two tacklers on the team.

Both of them combined for just $1.1 million against the cap last year, but Wheeler is a free agent and Rolando McClain is scheduled to make $6.6 million next year if he remains with the team.

Reggie McKenzie needs to find a way to hold on to Wheeler as he and Burris are the future for this team. McClain can take a hike, as he's proven to be more of a liability than anything else.

Linebacker Nick Barnett is a free agent after being cut by the Buffalo Bills on Monday, and his familiarity with McKenzie and linebackers coach Bob Sanders would make for a nice and cheap fit in Oakland.

The defensive line was Oakland's most disappointing unit in 2012 when it came to bang for your buck.

Tommy Kelly and Richard Seymour both underperformed while making a nice chunk of change in the process, while Lamarr Houston and Desmond Bryant gave Oakland some hope for the future.

Seymour's contract was voided last week, but is still owed nearly $14 million against the cap for next season in "dead money."

Meanwhile, Kelly is scheduled to make $11 million next year. He must restructure his deal if the Raiders want to have any money this offseason.

With that being said, the Raiders need to draft a pass rusher with the No. 3 pick to ignite the rest of their disappointing defense.

Sebastian Janikowski and Shane Lechler have been one of the best special teams combos in the history of the NFL.

For nearly a decade, the two of them have been the most consistent Raiders to put on the uniform.

Unfortunately, Lechler is a free agent, and it's unlikely McKenzie will pay him $5 million next season, especially after coming off the worst statistical season of his career.

The Raiders have kept Marquette King for a reason, and although Lechler has been one of the greatest and classiest Raiders of all time, it's almost certain his days in Oakland are over.