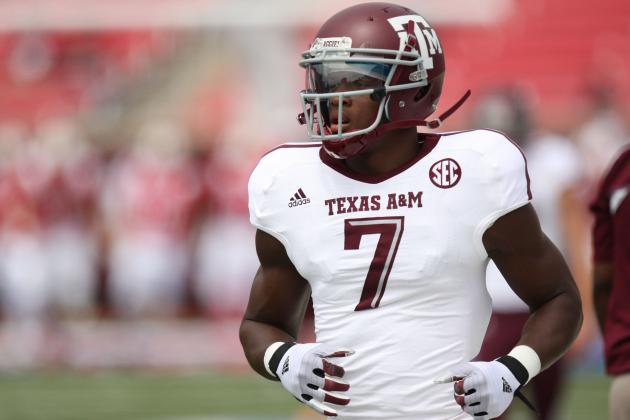 The Senior Bowl is in the books, but the college football All-Star game season isn't complete quite yet.

This weekend, another crop of 2013 NFL Draft prospects will participate in the Texas vs. The Nation Game, which pits players from the state of Texas against those from around the rest of the country.

With this game comes another opportunity for the Miami Dolphins' brass to further carve out its draft board.

Although the Texas vs. The Nation Game doesn't feature the star power of the Senior Bowl or East-West Shrine Game, there are a handful of sleepers whom the Dolphins should be monitoring.

Here is a look at six players both you and the 'Phins should keep an eye on this week.

If Matt Moore gets the chance to compete for a starting job somewhere—an opportunity he deserves—then he is as good as gone. This leaves the Dolphins with only two quarterbacks: Ryan Tannehill and Pat Devlin.

Jeff Ireland heaped praise on Devlin last week, but it remains to be seen if he is ready for a No. 2 role.

Either way, with Devlin entering his third season, this is an ideal time to start grooming another developmental quarterback. This draft class doesn't offer many enticing options—Jordan Rodgers is undersized, Landry Jones looks like Chad Henne 2.0, Zac Dysert struggled at the Senior Bowl—but how about Tulane's Ryan Griffin?

The 6'5", 208-pound quarterback threw for more than 2,700 yards and 20 touchdowns despite missing three games with a shoulder injury.

Griffin's prototypical size alone makes him an intriguing prospect. And considering he will probably go undrafted, he is obviously a low-risk investment.

This week of practices will be huge for Griffin and his draft prospects. If he plays well, then the Dolphins might want to take an extended look at him before the draft rolls around.

A pipeline between Miami and College Station was established last offseason when the Dolphins hired ex-Texas A&M head coach Mike Sherman and then brought in three of his former players: Ryan Tannehill, Jorvorskie Lane and Jeff Fuller.
Uzoma Nwachukwu—another one of Sherman's former players—is suiting up this weekend, and he is a realistic draft target for the Dolphins. The 6'0", 195-pound wide receiver only caught 26 passes in 2012, but his measurables and potential have scouts intrigued.
From Russ Lande of the National Football Post:

While fellow A&M receiver Ryan Swope received nearly all the national attention, Nawchukwu has a number of NFL people believing in him. Blessed with good height, long arms and excellent hand-use, his ability to defeat jam and release into route enables him to consistently get separation. Additionally, his deceptive foot quickness and sharp/precise routes allow him to create space vs man coverage.

It is also worth noting that Nwachukwu didn't click with Johnny Manziel as well as he did with Ryan Tannehill. Between 2010 and 2011, the pair combined 86 times for 1,064 yards and six touchdowns.

But the Jeff Fuller experiment hasn't proven fruitful, so there is reason to doubt this one would.

Although the Dolphins should draft a tight end early—unless they sign a starter in free agency—there is also an off-the-radar prospect worth considering.

Minnesota's MarQueis Gray was a highly touted quarterback coming out of high school, but he struggled to hold onto a starting job. Instead, he flip-flopped between quarterback and wide receiver (playing mostly quarterback, though).

Now, he is entering the Texas vs. The Nation Game as a tight end, and his 6'4", 250-pound build should help him make the transition quickly.

That size, coupled with 4.6 speed, makes Gray a player worth watching. He is obviously a project, but he has the tools and freakish athletic ability of other tight ends taking the league by storm.

At the very least, the Dolphins could look at Gray as a developmental player worth investing in.

After missing out on local diamonds in the rough like Jimmy Graham and T.Y. Hilton, one has to assume Jeff Ireland will make a greater effort to evaluate all the talent in his backyard.

This week will give the Dolphins a great opportunity to evaluate FIU's Tourek Williams, who is one of the best pass rushers participating in the Texas vs. The Nation Game.

The 6'4", 262-pound Miami native has prototypical size and put it to good use in 2012. He registered 46 tackles and 6.5 sacks and earned his third consecutive All-Sun Belt selection.

Williams doesn't project as much more than a late-round pick or undrafted free agent, but the Dolphins are in the market for pass-rushers. Williams' size, production and geographic proximity make him a natural target.

Another pass-rusher the Dolphins may have their eyes on this week is Temple's John Youboty.

Like Tourek Williams, he possesses ideal size (6'4", 250 lbs.) and production, having recorded 42 tackles and a team-high five sacks in 2012. He also offers some versatility, often sliding between defensive end and defensive tackle.

According to Dane Brugler of CBS Sports, "[Youboty] received scholarship offers from big programs like Michigan State, Nebraska and Missouri. However, he decided to enroll at Marshall to play for head coach Mark Snyder who coached his brother as the defensive coordinator at Ohio State."

Youboty transferred to Temple after Snyder was fired in 2010, and though he had success, it is worth wondering how his career would have differed had he gone to one of those big programs.

Maybe he will be a more successful NFL player than a collegiate one.

Linebacker is one of the few positions Miami doesn't need to address, but that doesn't mean it should be neglected.

The Dolphins have virtually no depth behind Karlos Dansby, Kevin Burnett and Koa Misi, so they need to start grooming some backups.

Houston's Phillip Steward doesn't boast any spectacular measurables or accolades, but he did enjoy a fruitful college career.

Had Steward played at a big-time program, he would have been a candidate for a slew of awards with that kind of production.

It is hard to say why Steward is so unheralded, but his undersized build certainly has something to do with it.

That didn't stop him from dominating the college ranks, though. It will be interesting to see if Steward can pack on some bulk and carve out an NFL career.