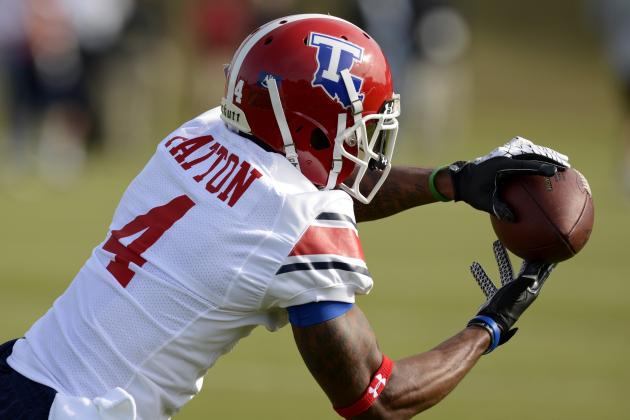 The Miami Dolphins should be feeling good after this week of Senior Bowl practices.

A draft class perceived as exceedingly weak at wide receiver saw a number of players shine in Mobile. This should make the Dolphins feel better about their chances of landing a top-end wideout early in the draft.

Similarly, another seam-threat tight end has surfaced on the radar, as did two cornerbacks.

This week proved that many of Miami's main areas of need—wide receiver, tight end, offensive tackle and cornerback—are much deeper than initially thought. Here's a look at some players from those positional groups (and one safety) who look like logical targets for the Dolphins in the 2013 NFL Draft.

I'm grouping Markus Wheaton and Quinton Patton together because I had the Dolphins selecting both in my latest mock draft, which was published last Saturday. The reaction was very negative, and I assume that was a byproduct of their relative anonymity.

However, both wideouts turned heads at Senior Bowl practice this week.

Russ Lande of the National Football Post praised both as have countless others in attendance. He writes, "[Wheaton] looks like the part of a polished slot receiver at the next level," and called Patton "one of the clear stars of the week."

Both players bring the speed and explosiveness that the Dolphins are looking for this offseason.

Though Wheaton and Patton bring a great deal of explosiveness to the table, Texas wide receiver Marquise Goodwin is in his own class when it comes to speed.

Goodwin is literally a world-class athlete, having competed for the 2012 U.S. Olympic Team in the long jump. He boasts sub-4.3 speed, but what separates him from other track stars turned NFL hopeful?

According to B/R's resident scout Matt Miller, "Unlike most track guys, his quickness translates well to the field. He's agile and able to change direction quickly; he's not just straight-line speed...He's catching everything catchable that's thrown his way...What's most important is that Goodwin has shown the route-running skills and hands to pair with his world-class speed."

The Dolphins are obviously in the market for home-run threats, and Goodwin is just that.

However, he only caught 26 passes for 340 yards and three touchdowns for the Longhorns in 2012. Jeff Ireland will have to overlook the hype and decide what is a better indication of Goodwin's NFL potential: his collegiate production or Senior Bowl performance.

Kansas State's Chris Harper doesn't have the electric explosiveness of those aforementioned wide receivers, but he does have a unique combination of physicality and athleticism that makes him an intriguing prospect.

Although his production isn't great by any means—58 receptions, 857 yards and three touchdowns in 2012—keep in mind he played in a run-heavy offense. In fact, Collin Klein attempted only 304 passes last season, which ranked him 82nd amongst all quarterbacks.

Harper's play compensates for his pedestrian numbers, too. He has amazing hands, and he can use his size and strength to get release from cornerbacks and rack up yards after the catch.

Aaron Dobson has been largely overlooked in the last few months, which is probably because he played at Marshall. He also wasn't very productive, hauling in 57 receptions for 679 yards and three touchdowns in 2012.

However, Dobson has a prototypical 6'3", 200-pound build, and he has some incredible ball skills. He also has some of the home-run threat traits that the Dolphins' wide receiver corp is lacking.

Russ Lande calls Dobson a "poor man's A.J. Green" who has the makings of a "legitimate No. 1 WR prospect for the NFL level."

Dobson looks like a second-round target for the Dolphins.

Tyler Eifert and Zack Ertz won't make it out of the first round, so unless the Dolphins are willing to take either at 12 or trade back in, they have to start exploring other options.

There's a steep drop off after Eifert and Ertz, but Rice's Vance McDonald emerged as a potential second-round alternative for teams in the hunt for a seam-threat tight end.

Russ Lande writes, "[McDonald] looked the part of the new wave of tight ends that are dominating in today’s NFL" and "he will hear his name called in the second or third round."

He'll have to answer about his blocking skills and modest production, but he's a player worth taking an extended look at.

Washington's Desmond Trufant might be the biggest winner from Senior Bowl Week.

The 6'0", 184-pound cornerback entered the week as a projected second- or third-round pick, but he'll reportedly depart Mobile as a likely first-round selection.

Cornerback is a huge need for the Dolphins, and it will become even more pressing unless Sean Smith takes a team-friendly deal. At this juncture, it's hard to see the 'Phins taking Trufant at 12 considering he wasn't even a projected first-rounder a few days ago.

But, by the time April rolls around, who knows—he just might work his way into the conversation.

Another cornerback that will depart Mobile with his head held high is Boise State's Jamar Taylor.

At 5'11", 192 pounds, Taylor isn't particularly imposing, but he plays a very physical brand of football that could suit him well at the next level.

NFL Network's Daniel Jeremiah praised him for "excellent instincts/ball skills," as well as that physicality.

Taylor currently projects as a second- or third-round selection, which is where the Dolphins will most likely target a cornerback.

Compared to positions such as wide receiver, tight end and cornerback, running back doesn't stand out as a pressing need for the Dolphins. But, Reggie Bush might not return and Daniel Thomas hasn't lived up to his second-round billing.

There's a fair chance Miami will select a running back at some point in the 2013 draft, and after this week of Senior Bowl practices, Florida's Mike Gillislee could be a candidate.

Dave Richards of CBS Sports reports: "What stood out the most was that Gillislee made plays every day. He doesn't have lightning speed but did show good burst and read his blockers well. He did a nice job in pass protection and also displayed nice hands."

The key phrase there is "made plays every day." Yes, the Dolphins need better wide receivers and tight ends, but ultimately, they need playmakers. If Gillislee can provide that kind of spark when he's on the field, then Miami has to consider him.

In the days leading up to this week, BYU defensive end Ezekiel Ansah began gaining steam as a first-round target for the Dolphins. NFL.com's Gil Brandt had Miami selecting Ansah with the 12th overall pick, and chatter around the Twittersphere began backing this notion as well.

However, the hype might've been premature.

Although Ansah is an athletic freak whose rawness and potential likens him to Jason Pierre-Paul, he might be too raw to justify a top-15 selection.

Daniel Jeremiah reports that Ansah "flashed one inside-spin move, but otherwise was predictable and unsuccessful in his pass-rushing attempts." He adds, "Some teams are concerned with what transpired this week, while others are still bullish on the incredible upside of the BYU defender."

Despite his disappointing week, Ziggy Ansah is still in play for Miami at 12, but don't bank on him as the pick.

I highly doubt the Dolphins will select an offensive lineman with the 12th overall pick, or at least I firmly believe they shouldn't. With Jeff Ireland at the helm, anything is possible, especially given his propensity for using money and high draft picks on linemen.

If Ireland decides to spend another first-round pick on his offensive front, then Central Michigan's Eric Fisher could be his guy.

Russ Lande not only praised Fisher for his performance this week, but went so far as to suggest that he's challenging Texas A&M's Luke Joeckel to be the first offensive lineman off the board. If the Dolphins share Lande's love for Fisher, then it wouldn't be all that surprising to see them take him.

Another offensive tackle whom Russ Lande showered with praise is Oklahoma's Lane Johnson, who was well off the national radar prior to this week.

Now, Lande suggests, "Although not many people are talking about it, do not be shocked if Johnson ends up being chosen in the first fifteen picks of the first round."

Again, I don't think the Dolphins should or will select an offensive lineman with their first-round selection, but it's still a definite possibility. It's worth monitoring players like Johnson and Eric Fisher as the combine and draft near.

The Dolphins are working on an extension for Reshad Jones and are reportedly interested in inking Chris Clemons to one as well. If Miami is able to sign both, then safety won't be a priority in this upcoming draft.

However, Clemons isn't a long-term solution. So while safety might not be a priority, it's still a position the Dolphins could address at some point.

After missing out on T.Y. Hilton—a diamond in the rough playing right under his nose at FIU—in last year's draft, Jeff Ireland should be making an effort to cover all of the local talent.

FIU safety Jonathan Cyprien shined at the Senior Bowl and caught the eye of Matt Bowen of the National Football Post:

The FIU product stood out on the practice field and is built like an NFL safety. Cyprien took good angles to the ball and he was physical at the point of attack on Tuesday. A player to watch the rest of the week.

If the Dolphins also believe Cyprien will be a quality starting safety, then he might be worth taking, even if safety isn't a pressing need.