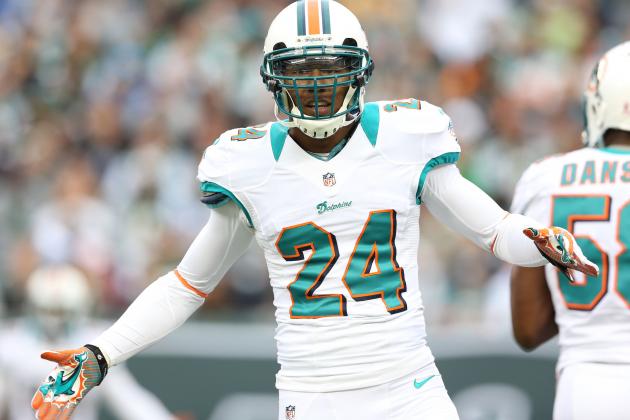 A vast majority of the Miami Dolphins' time, energy and resources will go toward bolstering an offense that finished 27th in the NFL in 2013, but that doesn't mean there's no work to be done on the other side of the ball.

In fact, one of Jeff Ireland's most pertinent decisions concerns a defensive back: Sean Smith.

As badly as the Dolphins need playmakers and weapons for Ryan Tannehill, they need a cornerback...or two...or three, just as badly.

The only cornerbacks Miami currently has under contract are Richard Marshall, Dmitri Patterson, Nolan Carroll and Jimmy Wilson. Marshall was underwhelming in four games, Patterson signed with the team in Week 16, Carroll is yet to prove he's anything more than serviceable and Wilson looks like he belongs at safety.

Despite his maddening inconsistency, Smith alone provides a significant boost to this cornerback corps. But, it's impossible to overlook that erraticism. One week, he's shutting down A.J. Green, and the next, he's getting torched by T.Y. Hilton. His year to year fluctuation is just as frustrating. 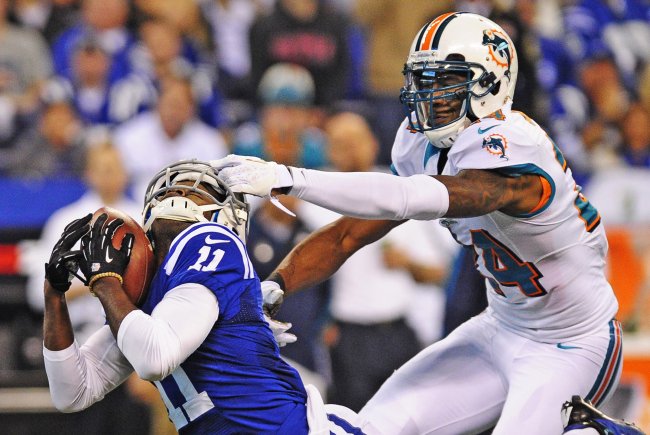 Thomas J. Russo-USA TODAY Sports
Whenever it seems like Smith has turned the corner, he lets the Dolphins down.

Smith will demand a relatively big contract, but can the Dolphins justify paying him big money?

Armando Salguero of The Miami Herald doesn't believe so, and he also shoots down the notion that the Phins will consider tagging Smith if they can't negotiate a new deal:

Smith's a contributor. He's solid against taller, bulkier wide receivers. But he is not elite and not consistent enough to merit the $10 million tag for corners. The Dolphins will have to think long and hard before they even offer Smith half that amount on an annual basis.

Miami needs playmakers and Smith has not been that the past four seasons.

It's also worth noting that Smith told Barry Jackson of The Miami Herald after the season, "[Miami] is where I want to be forever. I'm confident something will work out." Well, the only way something can actually work out is if Smith puts his desire to stay with the Dolphins above his desire to receive a considerable raise—which he surely would get on the open market.

Cornerbacks with Smith's physical tools—6'3", 214 pounds, 4.50 40 at '09 combine—don't exactly come around very often. Rest assured, there's a long list of teams that would love to get their hands on him and try to mold him into a consistently dominant player.

Smith's athletic ability is incredible...there's bound to be another team out there willing to pay him more than Miami.

Even if the Dolphins don't want to pay Smith more money than he has warranted, how many better options are out there?

The consensus top-rated corner in the 2013 draft class, Alabama's Dee Milliner, is a very possible and likely option for Miami with the 12th overall pick...if he's still on the board. And that's a big if, especially with the Detroit Lions picking at five.

Then, there's Mississippi State's Johnthan Banks, whose 6'2", 185-pound build makes him a bit reminiscent of Smith. However, he looks like a reach at 12 at this point in time, though that's definitely subject to change over the next few months. Plus, the Dolphins would be leaving some blue-chip prospects on the board by taking Banks that early.

The free-agent route isn't all that appealing, either.

There are a few quality cornerbacks slated to hit the open market, but the keyword here is "slated." If players such as Derek Cox, Cary Williams, E.J. Biggers, Brent Grimes or others actually enter free agency, then the Dolphins will have options.

There's just no guarantee any of them will.

Dominique Rodgers-Cromartie, Tracy Porter and Aqib Talib are also in the final years of their respective contracts, but is Joe Philbin willing to bring on players with red flags after dealing Brandon Marshall and cutting Chad Johnson.

Ultimately, the answer to the Sean Smith debate is easy.

He hasn't done anything to warrant the kind of money he'll likely receive on the open market, but replacing him won't be as easy as it sounds—and this complicates things. If the Dolphins lose Smith to free agency, then there's really no guarantee they'll find an upgrade.

They can find a cornerback with similar talent for less money, but rest assured, this decision will keep Jeff Ireland up at night.