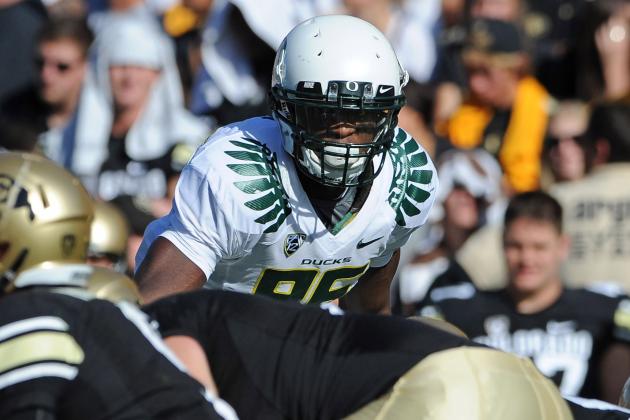 All underclassmen have declared, consensus rankings are forming—slowly but surely—and we're starting to gain a better idea of which prospects make sense for the Miami Dolphins and hence will be on their draft board come April 25th.

By now, most of you know how pivotal this offseason is for the Dolphins.

With approximately $45 million in cap space and five draft picks within the first three rounds, Jeff Ireland has a chance to salvage his career and help boost the 'Phins back into prominence. It's important to remember that Miami's draft outlook could change drastically as free agency unfolds, but here's a seven-round plan for them as of today.

Because there's no wide receiver worthy of the 12th overall pick (Tennessee's Cordarrelle Patterson is gaining steam and might push his way into the top 15, but I'm not ready to buy the hype quite yet), Miami should address another one of its most pressing needs: defensive end.

Besides Cameron Wake, the Dolphins do not have another consistent pass-rusher. Olivier Vernon had a pedestrian rookie season, and it became very evident that Jared Odrick cannot generate pressure from the edge. Plus, Wake turns 32 next season.

This draft is conveniently loaded with blue-chip defensive ends. Although many—Bjoern Werner, Damontre Moore, Jarvis Jones, Barkevious Mingo, possibly Ezekiel Ansah—could be off the board when Miami picks at 12, another should be available: Oregon's Dion Jordan.

As the 2012 college football season drew to a close, Jordan began gaining widespread recognition, and his draft stock rose accordingly.

Just when it looked like he'd be a surefire top-10 pick, he underwent surgery for a torn labrum. Although this raises a red flag, it could also be a blessing in disguise for the Dolphins if it knocks him down draft boards.

An incredible athlete with a 6'7", 243-pound frame, Jordan is a unique prospect who has the potential to be special.

Unless tight ends Tyler Eifert or Zach Ertz fall to the Dolphins at 42—which is highly, highly unlikely—Miami should jump at the opportunity to secure the services of Alabama's Barrett Jones.

Jones boasts incredible versatility, having played virtually every position along Bama's offensive front...in one game. He's also one of the most decorated players in college football history, departing Tuscaloosa with three national titles, a Rimington Trophy, a William V. Caldwell Trophy, two unanimous All-American bids and the list goes on.

Jonathan Martin and Mike Pouncey are the only starters guaranteed to return to the Dolphins offensive line in 2013. Jake Long is likely on the outs, John Jerry has proven to be merely average and Richie Incognito is an imperfect fit for Miami's zone-blocking scheme. However, Incognito should return, leaving two open spots.

Jones can immediately step in wherever the Dolphins need him, and he could be a mainstay on this line for years.

His nimbleness makes him an ideal fit for the system, and, hey, if you have a chance to grab one of Nick Saban's lineman, why pass it up?

With its next second-round selection, Miami can start adding playmakers that will help make life easier for Ryan Tannehill. Although this draft class lacks a standout, elite wide receiver, there are a few under-the-radar prospects who could emerge as highly productive NFL players.

One of those wideouts is Louisiana Tech's Quinton Patton, who is one of this draft class's best kept secrets.

I feel like [Quinton Patton] from Louisiana Tech is the best receiver I’ve played against since I’ve been here. I’ve gone against some good ones in the SEC, too, but he’s probably the most complete.

Some will knock Patton for playing against mediocre talent at Louisiana Tech, but he actually had his best performances against big programs. In 2012, he caught 21 passes for 233 yards and four touchdowns against Texas A&M and shredded Illinois' highly touted cornerback Terry Hawthorne for 164 yards and two touchdowns.

Expect to hear more about Patton as the draft nears.

While Quinton Patton could become a go-to wide receiver at the next level, he's not a consistent vertical threat, which is something the Dolphins desperately need.

Oregon State's Markus Wheaton can fill that void and do a whole lot more.

Wheaton is one of the most explosive players in the 2013 draft class. He can stretch the field, he can create big plays out of nothing, and he has a nose for the end zone—a welcome trait for a Dolphins offense that scored the third-fewest touchdowns in the NFL this season.

He often resembles a more talented Brian Hartline, but his ceiling is much, much higher. In fact, Wheaton also compares to a player the Dolphins might ink to a massive deal: Mike Wallace.

That's a bold comparison, yes, but Wheaton is truly electric with the ball in his hands. His presence alone can force secondaries to play more conservatively.

It's highly unlikely that either Tyler Eifert or Zack Ertz—the best tight ends in this year's class—will escape the first round. So, unless the Dolphins take one of them at 12, trade down or trade back into the first round, they can wait to address the position.

With two wide receivers in the fold, this is an ideal time to do it.

San Jose State's Ryan Otten didn't play at a powerhouse program, but his measurables and production compensate for that. The 6'5", 245-pound tight end runs in the 4.7s and reeled in 47 receptions in 2012. But what separates him Michael Egnew, you ask? Otten is actually an adequate blocker, so he can be not only a red-zone target but also an every-down player.

If the Dolphins were to add Otten and a free agent such as Martellus Bennett, then their red-zone offense—and offense as a whole—would improve drastically.

There's a case to be made for cornerback as Miami's biggest need—especially if Sean Smith does not return.

The Dolphins will have to consider Alabama's Dee Milliner and Mississippi State's Johnthan Banks in the first round. However, they'd be better off taking the free-agency route, considering how many quality vets are slated to hit the open market (Derek Cox, Darius Butler, Dominique Rodgers-Cromartie, Cary Williams, etc.).

That doesn't mean Miami shouldn't draft a cornerback, though.

Louisville's Adrian Bushell would make for a nice middle-round value pick. The 5'11", 184-pound ex-Florida Gator (he transferred in 2010, following Charlie Strong to Louisville), quietly had a great season for an underrated Cardinals team in 2012. He's not particularly big, but he's more than willing to assist in run support and registered 57 tackles last season.

Bushell also emerged as a topflight cover corner by the end of the year. In fact, teams began to avoid his side of the field. He also came up big in Louisville's upset victory over the Gators in the Sugar Bowl, recording three tackles and two pass deflections.

One positional unit that won't come under scrutiny this offseason is the linebacker corps.

Karlos Dansby, Kevin Burnett and Koa Misi all elevated their games in 2012, but a serious injury to any of them would be devastating for Miami's defense. The Dolphins have virtually no depth behind their starting linebackers, making this an ideal time to start developing some young ones.

Wisconsin's Chris Borland won't wow you with workout numbers or measurables, but the 5'11", 250-pound middle linebacker registered more than 90 tackles last season as he helped anchor the Badgers defense.

Borland has been lauded for his leadership and intensity, so even if he doesn't pan out beyond being a special-teams contributor, his intangibles and production make him worth a fifth-round flier.

All three played under Mike Sherman in College Station, and it's evident he played some part in their signings. So, there's a good chance the Dolphins will channel that Texas A&M pipeline again this offseason, and one very possible target is wide receiver Uzoma Nwachukwu.

Nwachukwu was named to the preseason Biletnikoff Award Watch List, but he didn't click with Johnny Manziel as well as he did with Ryan Tannehill—between 2010 and 2011, the pair combined 86 times for 1,064 yards and six touchdowns.

The Jeff Fuller experiment hasn't proven fruitful, but Nwachukwu is worth a seven-round flier anyway.

The Dolphins' running-back situation is very unsettled heading into the offseason.

Miami has made it clear it'll only offer free agent Reggie Bush a "team-friendly" contract, and Daniel Thomas been nothing more than mediocre and injury prone in his first two NFL seasons. Lamar Miller is in line for an increased workload next season, but while expectations are high, he still needs to prove himself.

Running backs are a dime a dozen in today's NFL. Some of the league's most productive backs—Arian Foster, Alfred Morris, Ahmad Bradshaw to name a few—were selected after the sixth round. So, even though running back is an area of mild concern, there's no reason for the Dolphins to spend a high draft pick on a back unless they become infatuated with one (e.g. Andre Ellington).

Fresno State's Robbie Rouse has flown under the national radar despite incredible production. At 5'7" and 190 pounds, he may be billed as undersized, but that hasn't prevented the likes of Ray Rice, Maurice Jones-Drew and Michael Turner from succeeding.

Rouse rushed for 1,490 yards on 242 carries in 2012, utilizing his smaller frame to hide behind offensive linemen and slip through holes. He also caught 63 passes, which makes him a nice fit for the West Coast offense, though Mike Sherman underutilized his running backs in the passing game last season.