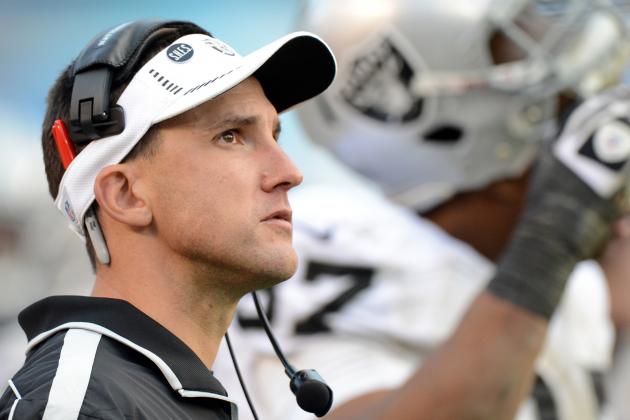 When first-year head coach Dennis Allen arrived in Oakland, the commitment to win and win fast was at an all-time high.

The Raiders finished 8-8 in 2010 and 2011, and the preseason expectations coming into 2012 were filled with optimism.

New general manager Reggie McKenzie wanted to implement a new culture in Oakland—a culture that did away with stupid penalties and a more disciplined style of play.

After bringing in Allen to replace Hue Jackson in January, McKenzie left the changing franchise in the hands of a rookie head coach with a defensive background.

The last coach in Oakland with a defensive background was John Madden, and Allen had a rough-go at it during his first season in silver and black.

Let's take a look at some of the mistakes Allen made during his first year in Oakland.

After winning the Butkus Award for the nation's best linebacker in 2009, Rolando McClain has been nothing short of disappointing since the Raiders drafted him in the first round in 2010.

McClain made headlines after he was suspended for posting content detrimental to the team on his Facebook page last month.

Instead of cutting McClain, along with his poor play and his immature attitude, Dennis Allen decided to suspend him. He may have just tried to teach him a lesson, but the truth is McClain does not care about the Raiders organization.

He made it perfectly clear in his Facebook rant.

For all the money he's getting paid, Tommy Kelly has been worth none of it.

In 2012, Kelly was virtually non-existent as a pass rusher and only recorded 1.5 sacks. He didn't get his first sack until Week 15.

Kelly was penalized time after time for trivial encroachment calls—and his inability to stay disciplined cost the Raiders dearly.

If Reggie McKenzie wants to implement a new disciplined culture in Oakland, players like Kelly need to go. He is owed $6.5 million in 2013, and it doesn't make sense to pay a guy that much money and not get anything back in return.

Allen should have gotten rid of Kelly a long time ago.

After Terrelle Pryor's starting debut against the San Diego Chargers, the Raiders look foolish for not getting him more reps during the earlier parts of the season.

Though Carson Palmer was the focal point of the Raiders' offense, Pryor could have been brought in for different packages to confuse defenses.

Oakland's offense was completely stagnant throughout the entire season and Pryor proved that he can make a name for himself in the NFL.

The Raiders went two-consecutive weeks without scoring a touchdown, yet Matt Leinart saw action before Pryor did. Something is definitely wrong with that picture.

Pryor brought excitement to the Raiders offense that had been boring and one-dimensional all season long, and the organization is sure to be kicking itself after not using him more.

The news that Raider fans have waited for all season long has finally been reported. Offensive coordinator Greg Knapp has been fired and it shouldn't be much of a surprise.

Oakland's offense had taken a serious step back under Knapp's zone-blocking scheme and it showed on the scoreboard.

The Raiders only scored 20 points twice in their last eight games and averaged less than 15 points per game over that span.

The offense had no rhythm whatsoever, and it was evident during Oakland's Monday Night opener against the Chargers.

Knapp has never been very successful as an offensive coordinator in the NFL. Now that he is out of the picture, the Raiders can get back to the potential they showed in 2010 and 2011.