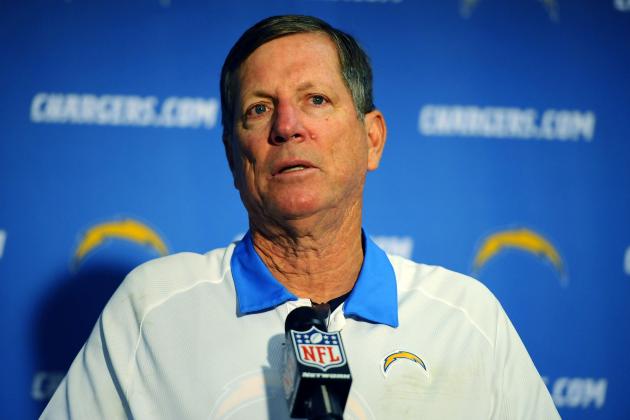 Norv Turner's era as head coach of the San Diego Chargers has finally come to an end.

Turner, who has been the Chargers' head coach for the past six seasons will probably be handed his pink slip as early as Monday.

During his tenure in San Diego, Turner accumulated a record of 55-40 with a win percentage of .574. He will finish as the third winningest head coach in Chargers history behind Sid Gilman and Don Coryell.

Turner led the Chargers to a AFC West divisional title and an AFC Championship game in his first season as head coach. He then followed it up with two more AFC West titles and trips to the postseason.

However, with a team that had Super Bowl-caliber talent, Turner was never able to reach the game that mattered the most.

He came under fire by critics after the 2010 season, in which the Chargers finished with a 9-7 record but missed the playoffs for the first time in four consecutive seasons.

San Diego would miss the playoffs again in 2011 after finishing the season 8-8.

To the dismay and uproar by fans, Chargers President and CEO Dean Spanos brought Turner and Smith back for the 2012 season.

The Chargers started with a 3-1 record, but would drop seven of their next eight games.

With each loss, Turner would come under fire about his inability to be a head coach despite being one of the greatest offensive minds in the game.

The Chargers ended their 2012 season with a 24-21 win against the Oakland Raiders, finishing with a record of 7-9.

Turner looked to be emotional during the Chargers' post-game press conference.

His eyes welling up and his voice even breaking at times while he was speaking, he even spoke in the past tense at times, knowing that his time had come to an end.

When asked by a reporter at the post game press conference Sunday, "In your opinion, do you think this is your last game?"

Turner replied, "Like I have said all along, I don't think my opinion matters."

He continued with, "We are going to meet tomorrow with team and I'm sure they will start looking for a new coach."

It seems as if Turner has already begun to accept his impending fate.

It is almost certain that he will find himself an offensive coordinator position with another team.

So, with Turner being shown the exit, it means the Chargers' search for a new head coach will begin. Let's hope that Dean Spanos can find someone who can return the Bolts to their winning ways.