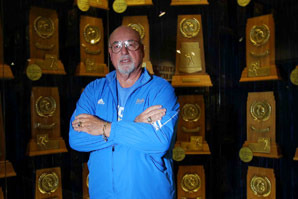 Although collegiate volleyball normally does not garner many headlines, there are times when an event causes people to take notice. The retirement of Al Scates in June of 2012 after 50 years of coaching men's volleyball at UCLA represents one of those occasions.

Scates, 73, leaves the UCLA Bruins with a career record of 1,239-290. No other program at UCLA in the last 50 years have won as many national titles as Scates' volleyball teams.

John Wooden's 10 national championships as UCLA men's basketball coach pale in comparison to the number that Scates has won. In addition, Scates did not need the questionable help from Sam Gilbert to reach his milestones.

Despite the rejection, Scales caught the volleyball bug and started to play regularly at the Santa Monica State Beach. Soon, he became one of the best players on the beach.

Scates transferred to UCLA and became a member of UCLA's volleyball team in 1959. He captained the squad in 1960 and 1961.

In 1963, Scates became the part-time men's volleyball coach for the Bruins. He was not the full-time coach until 1978. By then, Scates' squads had already captured his two USVBA championships and six national titles.

A tribute to Al Scates

Scates coached several historical names in men's volleyball such as Karch Kiraly and Sinjin Smith. Scates' teams went undefeated in three different seasons, including an incredible 38-0 record in 1984. It was not until 2009 that a Bruins team had a losing record (14-16) under Scates.

As a coach, Scates was known for his positive attitude and his ability to make key adjustments during a match. In volleyball circles, Scates is considered a master strategist.

Scates may not be talked about much by sports fans that don't consider volleyball to be a major sport, but those who enjoy the sport consider Scates as one of the greatest coaches in collegiate history. Scates may be retired now, but his accomplishments will not soon be forgotten.