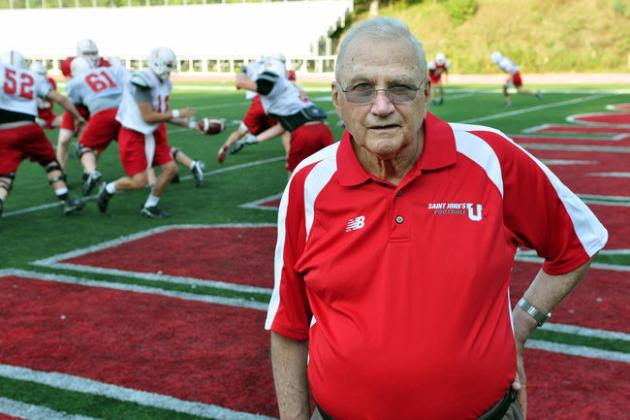 Many great events occurred in Division III football this year, such as the Mount Union Purple Raiders winning their 11th national championship since 1993. However, nothing had more impact on the sport than John Gagliardi announcing his retirement in November of 2012.

Gagliardi leaves college athletics as the winningest coach in college football history. He finished his coaching career with a record of 489-138-11 and a .775 winning percentage.

While at St. John's (MN) for 60 years, Gagliardi led the Johnnies to 27 conference titles and four national championships. His teams lost the national title game in 2000 and reached the national semifinals six other times.

It is very difficult to put into words how Gagliardi's absence after 64 years of coaching will impact college football. What college football loses without him can be best summed up in one word—everything.

Gagliardi's legacy is full of many firsts and lasts. In 2006, Gagliardi became the first active head coach to be inducted in the College Football Hall of Fame. It is very unlikely that anyone still in high school would be given the opportunity to be head coach of a high school team like he did in 1943 at the age of 16 at Trinidad Catholic in Colorado.

As competitive as FBS football is today, it will be very difficult for someone to be still employed as a head coach at the age of 86. Even administrators of lower division instructions like Division III tend not to give coaches a long leash if desired results are not achieved.

College football coaches today don't have the ability or even the opportunity to be as diversified as Gagliardi was. While at Carroll College in Helena, MT, he led Carroll to three conference titles in four years in football and won conference championships as a head coach of the basketball and baseball teams.

Gagliardi still has the best winning percentage of any hockey coach in the history of St. John's. He also won two conference championships while in charge of the Johnnies' track team. Along with his coaching duties, Gagliardi served as athletic director at both Carroll (1949-53) and St. John's (1976-94).

Several of Gagliardi's coaching methods have few, if any, followers today. Gagliardi didn't wear a whistle nor did he conduct tackling drills in practice. He wanted his players to refer to him by his first name instead of "Coach."

Although Gagliardi will remain at St. John's until his contract ends on June 30, 2013, the world of college football already appears to be an emptier place with no more teams for him to lead. There has never been any coach like John Gagliardi, nor will there ever be one.