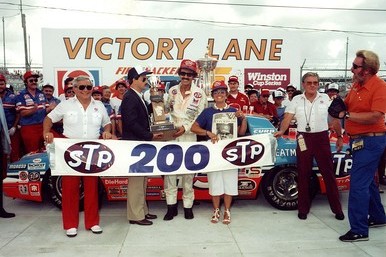 NASCAR is a sport built on speed, time and records.

And while records are meant to be broken, there are 10 records in NASCAR that will likely never be broken.

We call those the most untouchable records in NASCAR history—records made by drivers ranging from The King, Richard Petty, who virtually rewrote the sport's record book and continues to dominate it (as well as this slideshow, for reasons you'll soon read), all the way to the modern day and Kyle Busch.

So without further ado, let's look at the sport's most enduring records—one's that will likely never be topped:

This is unquestionably the record that has the least chance of ever being broken.

Richard Petty won an incredible 200 wins in his NASCAR career.

The next closest driver to Petty was his no. 1 rival, David Pearson, with 105 wins.

By comparison, the active driver with the most wins is Jeff Gordon, who earned his 87th win at Homestead in the 2012 season finale.

Given that it has taken Gordon 19 seasons to get 87 wins, he'd theoretically need to race another 25 years and win at least 4.5 races per season to catch Petty. Somehow, we just don't see Gordon racing until he's 66 years old.

This is one other record that will likely never even come close to being broken, either.

Richard Petty won an almost incredulous 27 races in 1967. Of course, that was a season when he competed in 48 races.

By comparison, the next closest was Jeff Gordon, who won 13 races in 1998.

As great a career as Richard Petty had, he comes up short to Herb Thomas in overall all-time winning percentage.

According to the NASCAR record book, for drivers with 100 or more career starts, Thomas had a winning percentage of 21.053 percent (48 wins over 228 starts).

J.D. McDuffie holds the distinction of having the most starts in Grand National/Sprint Cup competition without a win: 653.

The currently active driver with the most starts without a win is Dave Blaney (431).

Not only does Richard Petty have the most wins of any competitor in NASCAR Grand National/Cup history, he is also the driver with the most second-place finishes (157).

Not surprising, given their long-time rivalry, David Pearson is second to Petty, but at a substantial distance, having finished as a runner-up 89 times.

By comparison, the two current active drivers with the most runner-up finishes are Jeff Gordon (65, good for fifth on the all-time list) and Mark Martin (61, sixth on the list).

Tied for 11th with Buddy Baker, Terry Labonte and Rusty Wallace is Tony Stewart (all with 42 second place finishes). Jimmie Johnson is 15th with 40.

Richard Petty is no. 1 in this category, as well.

In addition to being the first driver to win seven Grand National/Sprint Cup championships (a mark subsequently tied by the late Dale Earnhardt), Petty also finished second in the final standings six other times.

Bobby Allison and still-active Mark Martin are tied for second place with five season runner-up finishes in the final standings.

Since that occurred in early May, HMS earned nine more for Mr. Hendrick.

But unless Jimmie Johnson, Jeff Gordon, Kasey Kahne and Dale Earnhardt, Jr. go out and win five races each over the next four seasons, Mr. Hendrick still has a long way to go to catch Richard Petty as a team owner with the most wins (287).

So much has been made about the five Sprint Cup championships that Chad Knaus has won with Jimmie Johnson. That feat is all the more noteworthy because all five championships came consecutively from 2006 through 2010.

But as significant as that record is for Knaus, he's still a few titles away from being the crew chief with the most career championships.

As we said, Knaus is second with five titles.

Don't worry, Kyle Busch fans, he gets the credit he deserves with this category.

Even though he's only 27 years old, Busch is already the active driver with the most wins across all three of NASCAR's professional series: namely, the Sprint Cup, Nationwide Series and Camping World Truck Series.

Next closest is Mark Martin, with 96 combined wins (40, 49 and 7). While he's nine overall wins behind Busch, given the disparity in their ages—Busch is 27 and Martin will soon turn 52—it's likely Busch will hold on to this mark for a long time, if not forever.

Once again, Richard Petty is No. 1 in this category. No surprise there, indeed.

In the same year (1967) that The King won an amazing 27 races, he also set another untouchable record of winning 10 of those races in a row.

Jimmie Johnson may have won four races in a row in 2007, but that is small potatoes compared to the mark Petty set 45 years ago, yet another record that will likely never be broken in NASCAR history.

Also, if you're a subscriber, tune in to SiriusXM NASCAR Radio Channel 90 this Saturday and Sunday from 9 a.m. to Noon ET as I fill in for Pat Patterson as host of "The FrontStretch."