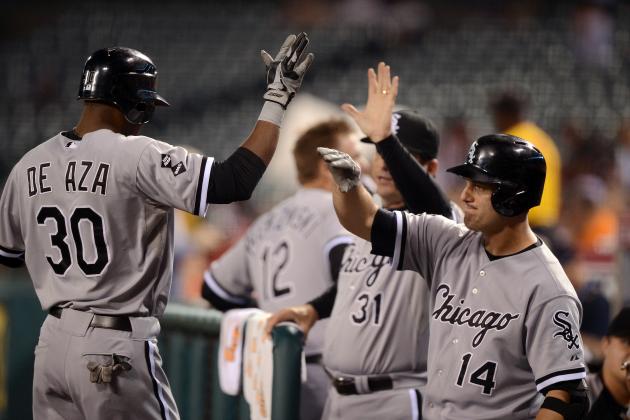 The latest flurry of trades and signings have left the market threadbare. Teams searching for center fielders are stuck with high-dollar free agents or forced to negotiate a trade.

That is exactly where the Cincinnati Reds find themselves this morning. While inking left fielder Ryan Ludwick to a two-year deal, the Reds are still in search of a replacement for Drew Stubbs.

While filtering through the tweets this weekend I noticed some interesting things. One rumor attracted my attention and made me wonder if the Reds haven’t been aiming too high.

Mark Gonzales of The Chicago Tribune reported that the Reds and the Seattle Mariners were discussing a deal that would send center fielder Alejandro De Aza to Cincinnati.

Even though his OPS+ is just a shade over average, it towers over Stubbs’ mark of 61 last year.

His splits were alright except he doesn’t hit southpaws as well as you would like. He does bat from the left side, though, which is another point in his favor.

On the down side, he isn’t quite the base-runner that Stubbs is. De Aza was successful in only 68 percent of his stolen base attempts, while Stubbs had an impressive 81 percent success rate.

As the old adage attests, you can’t steal first base. The Reds desperately need a leadoff man who can get on and set the table for the meat of the order.

Both men are 28, while Stubbs has had three consecutive seasons with over 500 AB. 2012 was the first time in five seasons that De Aza had more than 500.

De Aza is making minimum wage and isn’t set to become a free agent until 2016. It is unclear what the Sox would get in return and how the three-way trade would work.

The Reds are only needing a temporary center fielder while hoping that the Billy Hamilton experiment in the outfield is a success.

Ludwick’s two-year deal along with Hamilton’s expected presence in 2014 means the Reds would need a good backup and De Aza would fill that job nicely.

Read more on my blog.