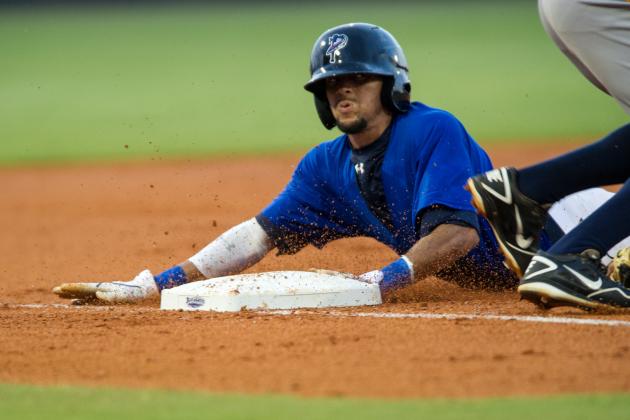 If you talk about signing an outfielder for the Cincinnati Reds, the first question asked is about speedster Billy Hamilton.

Obviously, at least to the average Reds’ fan, the franchise is structuring its immediate future to the fleet legs of the shortstop-turned-center fielder.

For clarification, we will need to start by calling this little thief, Billy Hamilton 2.0, because there was a Billy Hamilton (nicknamed Sliding Billy) who was also very proficient at base-stealing.

The original version, also an outfielder, played from 1888 until 1901 and lead the league in stolen bases five times, twice copping 111 in a season. He was voted into the Hall of Fame in 1961 by the Veteran’s Committee.

Yes, he was an excellent base stealer, but he doesn’t have the professional SB record for a season, does he? No, he does not, that claim goes to BHam 2.0.

In 2012, while playing with Bakersfield in High-A and Pensacola in Double-A, he set the record for professional baseball with a mark of 155. He was nailed 37 times to post an 81-percent theft rate.

I was under the impression that he had played most of 2012 as an outfielder, however records at Baseball-Reference.com do not reflect that. Their statistics show that he only played shortstop and DH.

What is your opinion?

What is your opinion?

The roster at Pensacola has him still listed as an infielder, but when you click on his name it brings up his card and it shows him as an outfielder.

Here is the rub. Are we to assume that he is going to be a great outfielder just because he has a jetpack? Unfortunately, speed does not necessarily translate into a good center fielder.

There is already a man named Drew Stubbs there. He can’t hit his arse with both hands but he can play very good outfield and can steal at the same rate as BHam 2.0. The problem is that Stubbs can’t get on base but BHam 2.0 can.

Is that the typical player you build a team around? Don’t look at me like that. I know Joey Votto is now a lifer with the Reds and so is Brandon Phillips. Jay Bruce will probably be there forever.

The thing is, everything moving forward revolves around Hamilton. They are hesitant to find a decent center fielder for more than a year and plead poverty when the name of a very good left fielder (Alex Gordon) comes up.

Hamilton was originally blocked because of Zack Cozart and Didi Gregorius. Then came the brainstorm about transforming him into an outfielder. That experiment with Yonder Alonzo failed miserably.

I know Alonso and Hamilton are like apples and oranges, but experiments are what they are.

It is not as though you could put a glove and cleats on Usain Bolt and ask him to patrol the center field area for you, even if he could bat .350.

BHam 2.0 is probably a very athletic young man and will most likely make a smooth transition to the outer parts of the old ball yard, most nothing can be taken for granted—nothing

Keep in mind he was not a blue chip defensive shortstop.

If the experiment fails in Pensacola or Louisville or wherever he will be in 2013 or he drops back to a .260 hitter, what will the Reds have gained?