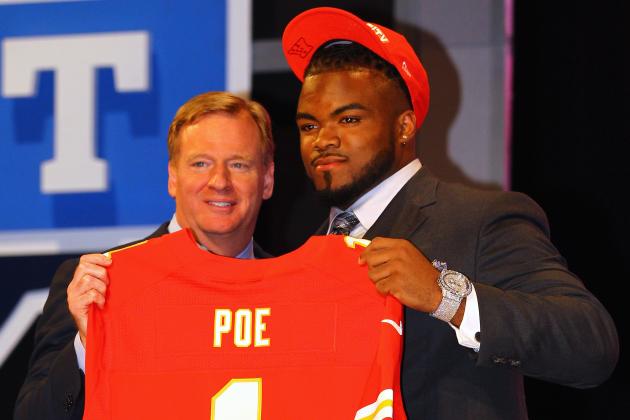 In April this year, the Kansas City Chiefs made a risky move.

In the first round of the NFL draft, they selected a defensive tackle out of Memphis named Dontari Poe.

Scott Pioli didn't consider it a risk. Of course, Pioli is also a guy who plays so close to the vest he rarely takes chances. He only gambles on sure things.

Why he felt Poe was a sure thing was beyond me, but then again, he took Jon Baldwin the year before so the selection of Poe hardly came as a surprise

Poe had little claim to fame. He played in a very weak conference while at Memphis. He didn't play particularly well, but his size alone got the attention of the eyes of some scouts.

The kid weighs 350 pounds, and at the combine, (as if it matters), had 44 reps and ran a 4.9. Based on size alone, Poe became "a beast," especially to Chiefs fans because that's what they wanted to believe.

Had the Raiders somehow drafted him, Chiefs' fans would be calling him something much different. Funny how that works

Fans love to make excuses for Poe. We have heard it all before. One line of thought was they had poor coaching at Memphis and that coach Romeo Crennel would bring out the best in him. Others said he played both tackle and it would be much better if he concentrated on just one position. Still other fans have said he is young and just needs time to develop, and rave about combine performances. 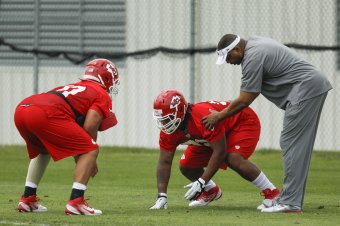 It never occurred to them that Tank Tyler also made 44 reps and weighed a lot less. Also, none of the top ten bench pressers in combine history ever made an impact in the Pros except Steven Paea.

Fans always have the answers though. They use rationalizations as a mindset. They want to believe, because it is much too painful not to, and it's always been a tradition to trash another team's picks while defending your team's own, but if you take that train of thought too far, you end up 1-9 and then wonder why

There are a lot of things to like about Poe. He is a good kid. He works hard and hustles on the field. He has quick feet and he carries his weight well. He also plays a lot of snaps which is a tribute to his stamina, and fans can always believe that experience will make him better. I personally feel he is good as he is ever going to get.

But there is also a lot not to like. First of all, we must discuss nose tackles

Then you have Poe.

Poe rarely draws double-teams and gets stalemated by one guy. Not good, even for a rookie. When Poe recently played against Pittsburgh, he was blocked by one guy for almost the entire game.When he finally saw a double-team, he froze like a deer in headlights. 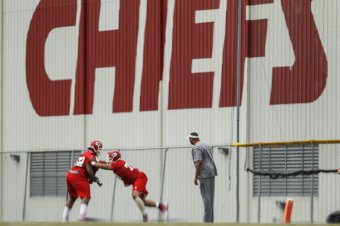 He has other problems as well. His instincts for the game are poor. By the time he figures out what he is supposed to do, it's usually too late to do anything.

Poe can't 2 gap which is essential for a 3/4 defense, although there are some that require only one. Poe should play for one of those teams

What bothers me the most is that he doesn't play the game mean, and when you are in the trenches you have to or you'll get pushed around by offensive lineman all day because that's what they expect

Now before anyone jumps in with the point that a nose tackle is only supposed to occupy blocks or clog running lanes, he isn't doing that either; it's the rest of their front seven.

Although nose tackles may get tired from being in the trenches, it is not a hard position to play. Crennel taught him that from the first day of training camp.

If his play doesn't improve as this season goes on, I would try him at offensive guard.  First of all, you know he can handle a bull rush. Secondly, he has the foot quickness to slide down the line, which is essential for a stretch zone blocking scheme, and he also has the athletic ability to pull.