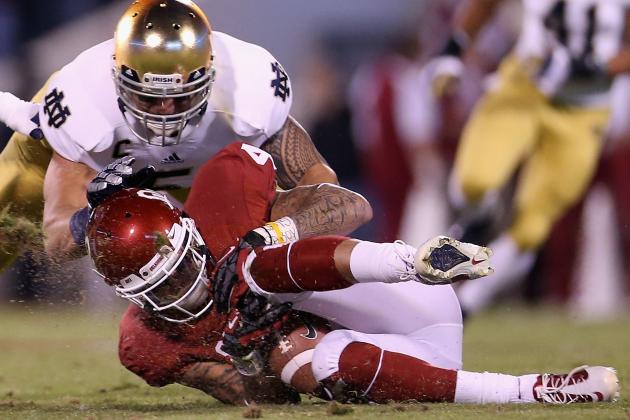 It was a dark and not-stormy night...

Stormless, I sat at Rosie O’Grady’s with a good friend and my luckiest ND baseball cap. Twenty-four HD TVs at a Michigan sports bar with a game time of 8 p.m.

And the reason for venturing from the friendly confines of my man cave?

The Irresistible Force versus the Immovable Object—No. 8 Oklahoma at home versus a 5th-ranked Irish squad.

Resplendent in his red game duds, before me, “Big Game Bob” Stoops leered on-screen: 79-4 at home over 14 seasons with a national championship and seven Big-12 titles in his pocket.

Plenty to leer about.

Drinks at the ready, I dug in for the pending conflict.

The hostilities started when I realized that a 22nd-over-ranked Michigan Wolver-rats team was going up against a corn-fed over-hyped Nebraska Husker team at the same moment the Detroit Tigers were trying to claw their way back into World Series contention.

TVs were at a premium, and the place was rife with Mitten-State fanatics.

Many a battle is won with quick money, and a prompt $20 tip on a two-beer tab averted a crisis as I was ceded one screen in a remote corner devoted to ND for the duration of the viewing campaign.

And what a campaign it was.

I hunkered down as skirmishes broke out, pitched battles were fought, and a gridiron war was won.

In the end, Stoops yelled, yelled some more, then merely Stooped.

And in the process, my eyes were treated to the birth of a new Irish Nation, as even the crashing waves of embittered Spartan and Wolverine faithful had to concede the Irish a sovereign position among the nation’s best football teams.

As the battle-smoke cleared and the ibuprofen did its handi-work, two important things became abundantly clear.

Begin Slideshow »
Wesley Hitt/Getty Images
No one is running over the Irish D this year.

There have been trying times in defensive coordinator's Bob Diaco’s tenure at ND where Navy ate him alive, Air Force lit him up for a guzillion and four yards, and he was unable to slow such mega-offensive juggernauts as mighty Tulsa.

In 2011, the uber-athletes outside and meat-grinders up front at USC and Stanford made the Irish defense look like small children getting repeatedly pantsed by older brothers. And that's putting it kindly.

Last year’s 24-point fourth-quarter meltdown against Michigan’s “passes-that-look-like-punts” offense left us all questioning if Diaco even belongs at the next level.

After last Saturday, he belongs.

Maybe Diaco’s front seven were too undeveloped and inexperienced or maybe Diaco didn’t know how to harness the talent he had, but whatever was broke in 2011 is fixed this year.

Navy has returned to its perennial practice squad status. Purdue’s two seasoned QBs and Big Ten line did little and nothing against a secondary with two freshmen and a sophomore running back who had started exactly one game at corner.

Michigan’s Denard Robinson was finally and fully exposed as the punt-throwing slot back he is, and MSU’s strong-armed junior QB and All-America stud running back did nothing to impress anybody.

BYU’s yardage-challenged offense was its offensive self, despite several golden opportunities.

Finally, with the youngest secondary in the country, the Irish held Oklahoma’s all-time leading passer and track-athlete-infested plus-40-points-per-game offense to 13 points by keeping the ball in front of them and holding an Okie running game averaging 174 yards per game to 15.

For those of you who join me in the innate inability to calculate beyond the fingers on both hands, that’s enough rushing yards for a first down and a half over the entire game.

That same Sooner track team has logged 50+ three times already this season, including putting up 63 on No. 25 Texas.

With ND getting pressure rushing three or four and keeping the passing lanes crowded, yards after catch became next to nothing, ergo, the Sooners got lots of catches for little points.

Somehow, we shouldn’t have been so surprised.

For 2012, Diaco has held a lot of decent offenses down in lots of different ways, and along the way linebackers that couldn’t cover my mom last year are blanketing underneath routes in 2012.

A defensive line that was pushed around early and often in 2012 has created pressure and caved pockets with only three- and four-man rushes, while consistently stuffing the run on the way to the QB.

A secondary that was mostly playing high school football or scout team running back last year is making plays on the ball and tackling in space.

Our talent has grown a lot in a year, and it’s clear that Diaco has grown with it.

Ronald Martinez/Getty Images
EG did lots right and no big wrongs against a fast Sooner defense.

These stats—13-for-21 for 149 yards with an additional 79 yards rushing and one rushing TD—are pretty good numbers for a freshman against the Sooners athletic 16th-ranked 17.4-points-per-game scoring defense.

Except those aren’t freshman numbers.

Those are the numbers of Kansas State’s 23-year-old senior Heisman hopeful QB Collin Klein against the same Sooner defense in Norman five weeks ago.

More than once when pressed out of the pocket with receivers blanketed he put a spiral into the tuba instead of at Tyler Eifert and the entire Sooner roster.

It takes maturity to know when an incomplete pass is a win.

For the first time in his career, Golson—playing in his seventh college game—managed a game, and he did it against an eighth-ranked team with a lightning-fast defense in a hostile environment.

Not only did he throw well without pressing the issue, he extended plays and drives with his legs time after time. I often think my own mom would have trouble containing him off the edge without help from an outside backer.

He is possibly even faster than me.

To tell you how good the Irish were, when the game ended two women spotted my lucky hat and sent me over a shot of Jameson, just for being Irish.

Last time that happened I was living at Flanner Hall and going to happy hours at Corby’s.

And lest we forget, there were a lot of others that deserve a pat on the back.

Manti Te’o had another typically monster performance, and the D-line dominated a very good Oklahoma front. Brian Kelly called a great game by using Golson’s skills without exposing him.

And in case you didn't notice, Kelly's vertical game to stretch the defense and keep corners and safeties on their heels (and off the running backs) works when your QB can throw for more than 32 yards in the air without getting two chances.

An offensive line alternately protected like a bull elephant and her young, and opened lanes with bar fight violence and equal success, giving Golson time and Riddick and Wood space.

A veritable cornucopia of receivers caught what was thrown to them, and no one argues that as a group, there is speed, hands, and a welcome physicality.

Still, above all, Diaco and Golson both deserve game balls.

Golson ran the offense and took advantage of his skills when he needed to. And he didn’t give up the rock. Getting that much production and poise from a first-year starter deserves all the kudos we can give him.

And as for Diaco?

Forget about holding a high-powered Big 12 offense to 13 points at home. It’s more than that.

Taking a secondary that doesn’t shave and turning it into a D that is second in the country at 9.9 points per game says all you have to say.

Follow Notre Dame Football from B/R on Facebook and get the latest updates straight to your newsfeed!

We'd like to send you the most entertaining Notre Dame Football articles, videos, and podcasts from around the web.