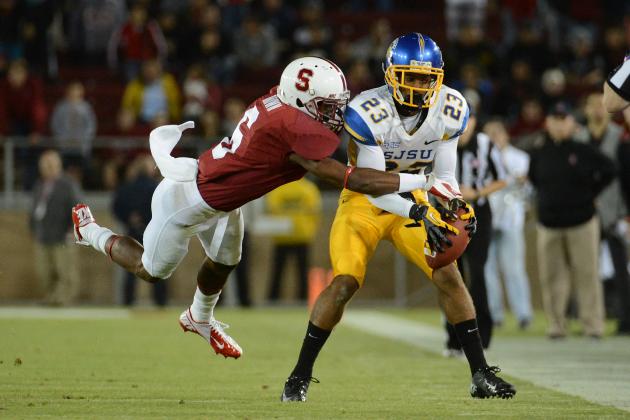 In the world of college football, many players are ignored as a result of the teams that they play on. Noel Grigsby is still getting ignored even though the San Jose State Spartans have improved this season.

Grigsby tallied 15 touchdowns and averaged over 20 yards per catch as a wide receiver at Crenshaw High School in Los Angeles, Calif. in 2007. In 2008, he was a second-team All-City selection as a defensive back.

Grigsby displayed his versatility as an athlete by also lettering in basketball and performing as a sprinter and high jumper on the track and field team.

After redshirting in 2009 at San Jose State, Grigsby quickly emerged as a major wide receiving threat for the Spartans. In 2010, Grigsby caught 56 passes for 822 yards and four touchdowns. His reception and yardage marks set freshman records at San Jose State, and Phil Steele selected him as a second-team Freshman All-American.

Grigsby became the first Spartan freshman with at least 700 receiving yards in a season. His 14.7 yards per catch ranked second among 2010 FBS freshmen with at least 50 receptions.

Not since John Broussard in 2006 had any receiver recorded a yards-per-catch average as high as Grigsby's.

In 2011, Grigsby continued to improve as a wide receiver. His 89 receptions set a single-season record at San Jose State. The Western Athletic Conference selected Grigsby as a second-team All-WAC wide receiver.

Although some of Grigsby's numbers were impressive, others suffered from his inability to position himself further downfield because of quarterback and offensive line issues. He only caught two touchdown passes in 2011, and his yards-per-catch average dropped to 9.9.

In July, Grigsby was one of 48 players placed on the 2012 Biletnikoff Award preseason watch list. This award goes to the best pass receiver in college football.

Despite the individual achievements of Grigsby, the Spartans were not finding success on the football field. San Jose State was 6-19 in his first two years on the field.

SJSU's fortunes have begun to improve with the arrival of quarterback David Fales from junior college and tailback De'Leon Eskridge, a transfer from the University of Minnesota.

An improved passing game has given the 5'11", 175-pound junior more opportunities in single coverage and the chance to run deeper routes. So far this season, Grigsby has caught 43 passes for 690 yards and five touchdowns. On Saturday, he had four receptions for 110 yards and a touchdown against the Texas-San Antonio Roadrunners.

His yards-per-catch average is at a career-high 16.0. Earlier this year, Grigsby became San Jose State's all-time leader in receptions and receiving yardage. His streak for consecutive games with a catch is currently at 28.

As a junior and a team captain, Grigsby has enhanced his leadership skills. As a wide receiver, Grigsby's best attributes are his exceptional hands and his ability to get open regardless of the defensive alignment.

Although Grigsby may be unknown to many college football fans, opponents are fully aware of his talents. Supporters of the Spartans know Grigsby well enough to want to see him at San Jose State again next year.