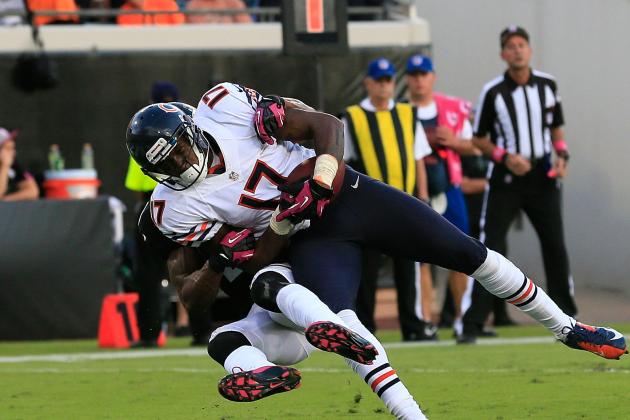 The Chicago Bears have only played five games so far this season but those five games have shown a lot about how this team operates.

We know now that the Bears have a solid defense, a budding offense and a good special teams unit. These things combined have helped lead them to their victories prior to the bye week.

But just how good are the Bears piece by piece?  Are there problem areas on the team that are being overlooked or is this a solid team, where everyone is playing well to help win football games?

Let’s take an in-depth look at each position on the Bears and grade their progress during the season thus far, why they deserve that grade and what they need to do to improve it.

Jay Cutler has had some slow starts these past few weeks.  His interceptions haven’t helped any but once he gets going, Cutler is a decent quarterback.

Attitude and sideline antics aside, Cutler is growing in this offense—as are the rest of the offensive players—and still has more to go.  He’s bound to be a good quarterback as long as he can limit his mistakes, find his receivers and get good protection.

Look for him to continue to improve as the season goes on.

Matt Forte’s injury lowers this grade a little bit but overall the running backs have been doing a good job running the football. Forte finally got over 100 yards against the Jaguars, as the Bears stuck to the ground game in that contest and it really helped.

Michael Bush has shown himself to be a very capable running back and Armando Allen even got into the action with a long touchdown against Jacksonville.

As long as injuries don’t hit this group the rest of the season, it should remain a strong and capable unit, helping the Bears offense move the ball down the field effectively.

The Bears wide receiving corps has come a long ways thanks to the addition of Brandon Marshall who has so far been everything that he was built up to be. The Bears have gotten a lot good production out of him and should continue to do so this season.

Rookie Alshon Jeffery has been a bit of a surprise for the team and hopes are high that he will be alright after suffering a hand injury that will keep him out for a while.

Devin Hester has impressed with limited touches while Earl Bennett has remained sidelined with an injury.  It looks like he will be back for the game against the Lions in a couple weeks.

Cutler just started utilizing his tight ends in their game against the Cowboys and should continue to use them often the rest of the season.

The one thing the Bears do lack, however, is a true and solid pass-catching tight end. They have to make due with what they have, meaning Kellen Davis is getting more passes thrown his way. He’s starting to deliver with some pretty good catches, too.

The Bears need to use the tight ends more often. Depending on how things shake out with the wide receiving corps, we may see more passes thrown to tight ends as the season goes on.

The offensive line started the season off rough, especially against the Green Bay Packers, but the O-line has since gotten better at protecting Cutler.

There was a change made, replacing Chris Spencer with Chilo Rachal and that seems to have helped some.  J’Marcus Webb appears to be getting better while it looks like Gabe Carimi may be regressing a little bit.

At any rate, as long as this line continues to gel and work together they should be able to provide enough protection for Cutler as well as good blocking for the running game to help make the offense even more effective.

Hopefully, the line can stay healthy and continue to work well together as the season progresses.

The defensive line has come up big for the Bears over the course of the first five games of the season. They are finally getting the pass rush from their front four like they always dreamed of.

Henry Melton has come up big on occasion for the Bears and Israel Idonije is quietly becoming a force on the outside.   Julius Peppers is constantly getting double teamed but still coming up with plays while Stephen Paea has managed to hold his own.

The Bears have a good rotation of linemen going into the game as needed. This rotation has managed to keep players fresh and active going after the quarterback.

It has produced results.

As long as the players on the defensive line stay healthy this unit should continue to thrive and play well.

This unit’s grade could have been a little bit lower because middle linebacker Brian Urlacher isn’t quite up speed yet but he has been doing a good job so far.

Lance Briggs has been on fire, not only returning interceptions for touchdowns but also keeping opponents from running the football.

Nick Roach has quietly been solid for the Bears starting at the other outside linebacker position.

As long as Urlacher can get back up to speed and this group stays healthy they should be able to produce well for the remainder of the season.

The cornerbacks have been lucky enough to have not been tested so much thanks to the pass rush and therefore they have been doing a good job.

Tim Jennings was named the NFC Defensive Player of the Month for his efforts and has been playing spectacular football.

His across-the-field teammate, Charles Tillman, has been playing very well, too, and has two interception returns for touchdowns so far this season.

D.J. Moore has been playing well as a nickelback and has an interception of his own.

Injury appears to be the only thing that could make this unit suffer, but the Bears have some depth at the position and could hold on if there is one.

The safety position is something it hasn’t been over the past few seasons for the Bears: solid.

Both Major Wright and Chris Conte have been healthy and playing very well this season, giving the Bears some strength at those positions.  Wright has been a sure tackler and a ball-hawking interceptor while Conte has remained solid and is a sure tackler as well.

Health is always the main concern with this group and has been a concern about Wright, especially as he has had injury problems in the past.

As long as he and Conte can stay healthy and maintain the continuity at these positions the Bears should remain solid here.

The Bears special teams units were burned in the game against the Packers and that lowers this grade.

They haven’t also gotten the return yardage to give the offense great field position at times but that’s because Devin Hester hasn’t had a lot of room to run recently as teams are keeping him bottled up after he makes a catch.  He is due to break a long return sometime soon.

Kicker Robbie Gould and punter Adam Podlesh have been doing well in the kicking game—there are no problems there.

Overall, the team has played well so far this season.

The offense has started out slow in a majority of their games but when it finally hits it comes alive and the team scores points.  They also move the ball well when they are on top of their game, going for long drives that eat a lot of time off of the clock.  Now if they could just start faster, the Bears could easily dominate.

Their defense has been very solid this season.  In fact, it has been one of the better defenses in the league.  Coming into the season, there were many that felt that the defense would be the problem area on the team but that hasn’t been the case.  They have played very well.