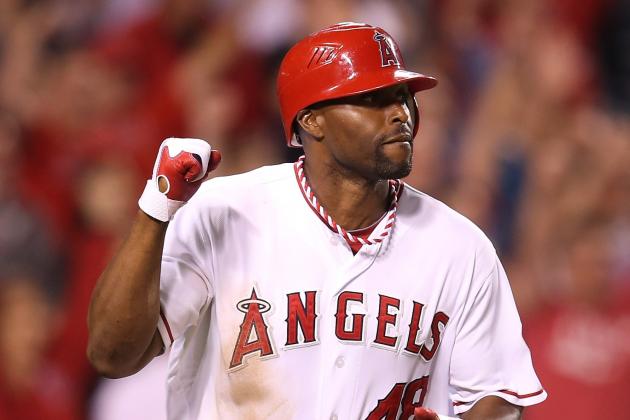 One of the main goals this offseason for the New York Mets is to improve their outfield production. This unit has been unimpressive to say the least and is a major reason why the club continues to flounder near the National League East basement year after year.

The challenge for the Mets is payroll and everyone knows that. The club is really going to have to do some homework in finding free agents and inquiring about trades.

Numerous reports have already indicated that the Mets will not be in the hunt for the marquee free agent outfielders which include Josh Hamilton, B.J. Upton, Michael Bourn and Shane Victorino because payroll just will not allow it.

There are plenty of other options available though and here are some players that could help fix New York's outfield issue in 2013.

Scott Hairston is the first and, probably, the most likely outfield option for the Mets.

Expectations were low when he inked a one-year deal before the season started to re-sign with the club in 2012. He has been one of the better platoon players in baseball and could be given an opportunity to be in the lineup more often.

Hairston hit a career-high 20 home runs in 377 plate appearances and continually crushed left-handed pitching. He also can play all three outfield positions, which adds to his value and intrigue.

Hairston could be a hot commodity on the market, so the Mets should be ready to pony up more than the $1.1 million they signed him for before the season started.

Yes, the Mets want to think long-term in rebuilding this team, but with limited options already on the roster and no top minor league prospect on the immediate horizon, they have to look for improvement now.

Torii Hunter could fit the bill.

Hunter's better days are behind him but at 37 years old, he has been a steady right fielder for the past few seasons. It still looks like he has a a season or two left in him yet.

The Mets could put him in right as a stop-gap player until they find a legitimate long-term solution. He could also be a great mentor to some of the younger players on the team.

Hunter is not going to command a lot of money on the market and he could be available at a very fair rate.This seems like a low-risk investment with more potential upside for the Mets.

Cody Ross is another low-rate option the Mets could look to pursue. He is a player that fits the same mold as a Scott Hairston and offers the same qualities.

He got steady playing time for the Boston Red Sox and provided right-handed power in a lineup that was in flux all season.

The Red Sox will be spending their boatload of extra cash on the top free agents this offseason and Ross could be on the outside looking in, making him available to other clubs.

Ross is a hard-nosed player that could provide energy and enthusiasm to the Mets. He can play both corner outfield positions. He also has the arm and range the Mets are looking for, especially at Citi Field.

It is pretty obvious the Mets got the raw end of the deal in the Angel Pagan trade, but here is their opportunity to bring him back.

Pagan will be a free agent at the end of the season and patrols center field very well. The team underestimated that by giving him away in looking for bullpen "help." Ramon Ramirez was hardly any help at all.

The Mets also got Andres Torres in that deal and it is hard to believe he will be tendered an offer.

New York would like for Kirk Nieuwenhuis to hold down center, but it seems unlikely he will improve from what he already his. His strikeout rate is alarmingly high and not everyone is sold on him being an everyday player.

Pagan knows the organization and looked comfortable making plays in Citi Field. He also has the ability to leadoff and part of the reason why the Mets struggled offensively was their inability to get on base on a regular basis.

First and foremost, Grady Sizemore has to prove that he is healthy and can stay that way for more than a few months in a season.

If he can make that comeback, Sizemore could be an option for the Mets.

The Cleveland Indians may want to end their experience with Sizemore because of the frustration with his health.

The three-time All-Star and former Gold Glove winner is just 30-years-old and still has years left in the tank, if he can prove he can stay on the field.

It is easy to confuse reckless and going the extra mile with Sizemore. His injuries are related to how he plays the outfield, but a move to a corner position could prolong his career.

Sizemore should not be a top priority player, but if available at the right price, the Mets could benefit from bringing in a player with his caliber and potential.

Shin-Soo Choo was a player that was available at the MLB trade deadline and the rumor was he was going to be dealt to the Pittsburgh Pirates.

He has voiced some displeasure playing for the Cleveland Indians because of the culture of losing that resides there.

This could be the perfect storm. The Mets are looking to improve and Choo wants some hope of reaching the postseason. Given with how New York is revamping the organization, a union between the two could make both dreams a possibility.

Choo is a proven .300 hitter with pop and speed. He could solve a lot of problems the Mets currently have.

Choo will not be a free agent until after 2013, so if New York wants him, they will have to make a deal.

Cleveland finished second-to-last in team ERA so pitching will be a priority. One thing New York has is quality young pitching so, if Indians management still wants to unload him, Choo is definitely an option for the Mets.

The more the dust settles, the more it looks like Chris Young, not Justin Upton, will be the odd man out for the Arizona Diamondbacks, making him expendable.

If that is the truly the case, New York would have to at least consider if they are serious about improving the outfield.

The Mets would have to bite the bullet a bit as Young will make $8.5 million next season with a club option for 2014.

He has that rare of combination of true power and speed, but Arizona seems ready to move on with other outfield options.

The Mets and Diamondbacks could strike a mega-deal that could vastly improve both clubs. Arizona made the playoffs in 2011 and were the favorite in the National League West before the 2012 season started.

Arizona was in it towards the end of the season for the Wild Card and are a player or two away from being where they were a couple of seasons ago.

The Mets would benefit from having a player of Young's ability and, if he is dealt, he could have an added motivation to prove the Diamondbacks wrong.

Although this seems unlikely based on this contract, New York should at least make the call and see where Young stands with Arizona.