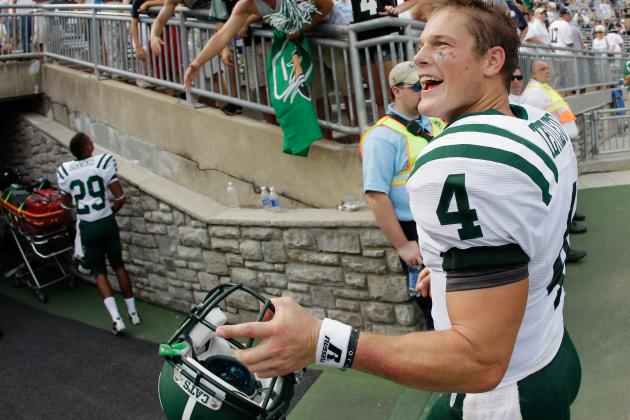 It is hard to believe that a player that was lightly recruited would end up leading his team to historical achievements and setting several school records in the process. It is equally unimaginable that he would do so while going virtually unnoticed by college football fans.

Such is the story of Tyler Tettleton, the star quarterback of the Ohio Bobcats.

Tettleton set a school record last year with a 148.6 passing efficiency rating and is now rated first all-time in Bobcat history with a 144.4 rating. Along with all of his passing accolades, he rushed for 658 yards and 10 touchdowns on 166 carries last year.

Not only did Tettleton succeed as an individual, he also spearheaded the Bobcats to achieve feats rarely seen at the university. Ohio won 10 games in 2010 for the first time since 1968.

Down 23-17 with two minutes, two seconds left on the clock in the Famous Idaho Potato Bowl against the Utah State Aggies, Tettleton pioneered Ohio on a 61-yard drive that culminated in a touchdown run to enable the Bobcats to win their first bowl game ever 24-23. He completed a key fourth-and-six pass to set up the game-winning score.

Although many websites list Tettleton's height at 5'11", he shows a superhuman ability to grow an inch just by putting on his uniform.

Ohio was just one of three schools that thought Tettleton could play quarterback at the collegiate level. Some coaches questioned his lack of height while others ignored him because of an ACL injury during his junior year of his school.

The Bobcats didn't actually focus on recruiting the son of former major league baseball player Mickey Tettleton until noticing Tyler at Norman North High School in Oklahoma while scouting a kicker. Tettleton had already committed to Northern Iowa, but changed his mind after Ohio became interested in his services.

Having already achieved much individual success, Tettleton is focused on directing the Bobcats to several lofty goals in 2012. Despite winning the MAC East two of the last three years, Ohio has not won a Mid-American Conference title since 1968.

An undefeated season by the Bobcats is not out of the realm of possibilities. Ohio lost its four games last season by a total of 19 points.

Tettleton rallied the Bobcats from a 14-3 halftime deficit to defeat Penn State 24-14 in Beaver Stadium on Sept. 1. He threw for 257 yards and one touchdown and ran for another last weekend as the Bobcats defeated the New Mexico State Aggies 51-24.

The Bobcats should be favored in all their conference games this season. With the Nittany Lions out of the way, the toughest non-conference contest remaining will be on the road at Marshall University this Saturday.

Behind the stern and steady leadership of Tettleton, nothing is out of the reach of the Ohio Bobcats this season.