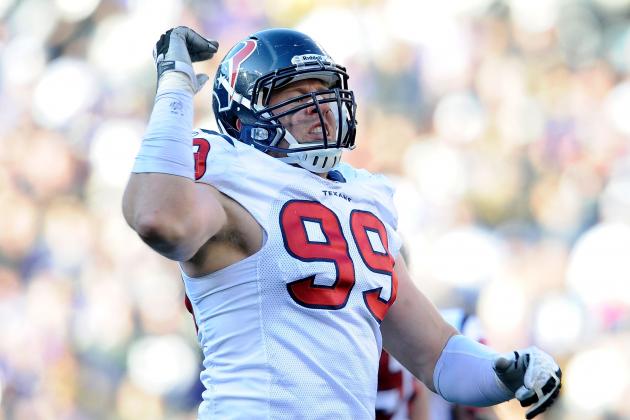 So far this preseason, we have gotten a pretty good look at what we can expect from most of the teams in the NFL when the regular season starts.

Some teams don't look so good and some look like they can't wait for the season to start.

The Houston Texans are one of the latter teams.

From the day after they were eliminated from the playoffs last year, they began working to be even better this season and I have to say, for the most part they are.

But I can't say everything is better.

Let's check out which positional units have progressed and which ones need some more work.

This one might be a toss up for people.

Some may say Matt Schaub is too injury-prone or that he is just a mediocre quarterback who has had one lucky season.

But I say different.

Schaub is a good quarterback with a lot of upside.

He has had four straight years with a QB rating above 90 and with a little bit of help, he could be right up there with the best quarterbacks in the league this season.

I am calling a complete season by Schaub with close to 30 touchdowns, if not more.

The photo to the left is of All-Pro running back Arian Foster, but the reason I say stock up is actually because of Ben Tate.

Obviously, Arian Foster has no reason to be anything but better than ever this season, but Ben Tate has been able to take the load off of Foster's shoulders more and more each game.

With a 5.4 average yards per carry, Tate could possibly be a starter on several other teams in the NFL and he would deserve the opportunity.

But he has humbly accepted his role as the backup running back to Foster and because of that, I say stock up on Houston's running backs all day.

Andre Johnson is one of the best wide receivers in the league if he can stay healthy.

That's not even legitimately arguable.

But the reason I say stock down is because he has zero help.

No one has emerged as a consistent helper and the front office didn't exactly make a push for any big receivers in the offseason, although Plaxico Burress is still out there. Hint, hint.

And in this new passing league, Houston needs more than just Andre Johnson.

It's not uncommon to see someone come back from a serious injury and be a little off their normal game.

And that's been Owen Daniels' problem ever since he tore his ACL in Week 8 of 2009.

Even though he was on pace for a 1,000-yard season before he got hurt, the fact is he just hasn't been the same since his injury.

The tight end position is my favorite in all of football and I am rooting for Owen Daniels to bounce back.

But unfortunately, he hasn't done anything yet to prove he will.

Not to mention, they lost his backup, Joel Dreesen, in the offseason.

In my opinion, this is one of the best positional units of the Houston Texans.

The offensive line allowed 33 sacks last season, which isn't amazing but it's not terrible. They also blocked well enough for Arian Foster and Ben Tate to rush for over 2,000 yards.

With the big extension they just gave left tackle Duane Brown, I expect him to earn his paycheck and play better than ever.

Throw that on top of the fact that Wade Smith, Chris Myers, Antoine Caldwell and Rashad Butler are more than capable of getting the job done and I say Houston has a top 10 offensive line.

My first thought here is that there is definitely potential.

I love J.J. Watt and Antonio Smith, but they still need to make a big statement this season to prove they are for real.

And even if they prove their worth, I am not sold on Shaun Cody at nose tackle.

The defensive line for Houston is good either way you look at it, but only time will tell if they are better than before.

The loss of Mario Williams and DeMeco Ryans has a lot of Texans fans worried about their defense.

But Super Mario didn't play the majority of last season and Connor Barwin is stepping up to fill the void that DeMeco Ryans left behind.

This group of linebackers is legit.

Before last season, Houston had one of the worst secondaries in the NFL.

Then they added Danieal Manning and Johnathan Joseph and they went from terrible to terrific.

With the raves coming out of Houston's camp about Kareem Jackson stepping up, expect the secondary to be even better than last season as one of the best in the league.

Although I was a big fan of Neil Rackers, the kicker is a position that is much easier to replace than return specialist.

So far this preseason, the 5'5", 170-pound Trindon Holliday is averaging 44 yards on five kick returns, 18 yards on seven punt returns and has returned a punt and a kick for a touchdown.

Should he take this high level of play into the season, he could be the final missing piece for a potential Super Bowl team.