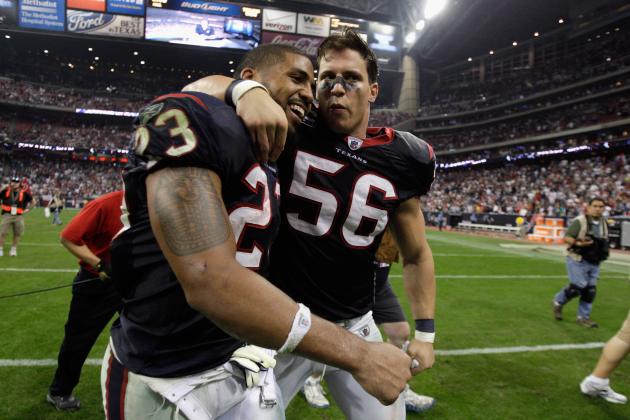 To many, the Houston Texans are predicted to do pretty well this season.

And why shouldn't they?

They have some top-notch talent, a nasty defense and a coaching staff that seems to be getting things right.

Last season, they were not only able to win the division for the first time in franchise history, but also won their first ever playoff game with their third-string quarterback TJ Yates.

Why shouldn't they expect at least the same thing this season?

Or better yet, why shouldn't they expect even more?

Well, nothing is handed to you in the NFL, but it's definitely possible provided these 10 things happen.

If you aren't sure what I mean by this, I urge you to Google Chad Johnson, Johnathan Vilma or Terrell Owens.

And that only names a few.

When players do something to attract negative attention, whether it's something in the media or something illegal, they distract their team from the task at hand: winning the game.

Whether it's the Saints' bounty scandal or Chad Johnson head-butting his wife, teams trying to remain focused on winning don't need any negative attention.

One could easily argue that Andre Johnson is one of the top three receivers in the league.

That argument would be even more valid if Johnson had some help on the other side of the ball.

Whether it's Kevin Walter, DeVier Posey, Keshawn Martin, Bryant Johnson, Trindon Holliday or even Jeff Maehl, it doesn't matter to me, but someone must emerge as a solid No. 2 receiver for the Texans.

With players like Rob Gronkowski and Jimmy Graham emerging as receiving tight ends, even Owen Daniels could fill this void for Houston.

But with the NFL being such a passing league, someone has to step up if the Texans want to win the Super Bowl.

With over 2,800 rushing yards and 26 touchdowns in the last two seasons, Arian Foster has emerged as one of the best running backs in the NFL.

But more importantly, he has had over 100 receptions and over 1,200 receiving yards in those two seasons.

The reason I say it's more important is because of what I said earlier: The NFL has become a passing league.

Green Bay, New England, New Orleans, Indianapolis and the New York Giants have all won the big game with their passing attack, not their running game

Now, I'm not saying he shouldn't run the ball, but Foster has shown he has the ability to catch the ball and make something special happen with it. And in order for Houston to win a Super Bowl, it needs to take advantage of that ability.

Some people may be thinking “How in the world will Houston's defense perform well without Mario Williams?”

Well, considering Mario Williams was injured in Week 5, didn't play the rest of the season and the Texans still finished second in total defense, I would say they have already performed just fine without him.

The most exciting number that sticks out to me is 44.

That's how many times a Texan sacked the quarterback last season, which was only six fewer than the league-leading 50 that Philadelphia and Minnesota had.

With players like Connor Barwin and J.J. Watt beginning to emerge, this defense could be better than ever in 2012.

And for Houston to go all the way this year, it will have to be.

As of right now, there are four games that stick out to me on the Houston Texans' schedule for 2012: Green Bay in Week 6, Baltimore in Week 7, Detroit in Week 12 and New England in Week 14.

Now, I'm not saying there aren't any other good teams on their schedule.

But those four teams have already established themselves as legitimate contenders.

For Houston to be taken seriously, it will need to win at least two of these games. And the more of these games it wins, they more confident it will feel.

Luckily, Green Bay and Baltimore will be played at home, but stealing one away from Detroit at Ford Field or the Patriots in Gillette Stadium would be huge in paving the road to the Super Bowl for Houston.

Right now, in my opinion, Matt Schaub is in the same category as Matt Ryan, Joe Flacco and Jay Cutler.

They aren't consistently dominant, but I think most people would agree they aren't pushovers either.

For Houston to win the Super Bowl, Matt Schaub needs to be even better than he was in 2009, when he threw for over 4,700 yards and 29 touchdowns.

He needs to take a few chances and trust his receivers to go get the ball.

And he needs to take control of the offense.

Schaub has a great quarterback rating from playing smart, but for Houston to win the Super Bowl, he will have to step up his game and be better than ever.

Each NFL team plays its division opponents twice: once at home and once away to total six divisional games.

And while all 32 teams want to win the Super Bowl, each team's first goal is to win its division.

For the Houston Texans to win the Super Bowl, they will need to establish dominance in the AFC South first by beating the Titans, Jaguars and Colts.

Obviously, in an ideal world for Houston, it would sweep its division and win all six games. But if it can win at least four of its six divisional games, it will be on the right track to hoist the Lombardi Trophy in February.

Throughout the season, there will be several tests and challenges for the Houston Texans that they need to overcome to build confidence and grow as a team.

Peyton Manning spent years carving up the Texans defense. Imagine how great they would feel if they finally contained Manning in Week 3 when Houston goes to Denver.

Then, there is Mario Williams.

Houston didn't make a very hard push to keep Williams when he became a free agent. If its offensive line can keep him at bay when the Texans host Buffalo in Week 9, it will be a huge boost in confidence.

Then, the icing on the cake will be shutting down the Colts in Weeks 15 and 17 to show that even Andrew Luck will not take the AFC South away from them.

Last season, the Texans won the division for the first time ever, and even beat the Bengals in the first round of the playoffs.

But for Houston to have the best chance at going all the way and winning a Super Bowl, it will need to be the best in the AFC and earn home-field advantage throughout the playoffs.

This is still a very inexperienced playoff team, and it would relieve a lot of the jittery nerves if it could play each playoff game at Reliant Stadium in Houston.

For quarterback Matt Schaub, who didn't play in the playoffs last season due to injury, it could make all the difference.

Is it possible to stress this one enough? I sure as heck don't think so.

Injuries have plagued the Texans the last few seasons.

Matt Schaub, Andre Johnson, Owen Daniels and Mario Williams all have suffered from injuries to hold the Texans back from their full potential over the last few years.

For Houston to have a real, legitimate shot at a Super Bowl, it needs to be as close to 100 percent as possible.

Already this preseason, Duane Brown, Andre Johnson, J.J. Watt, Brian Cushing and Kareem Jackson have had some sort of scare involving their health.

For the sake of the Texans' Super Bowl hopes, let's hope they can get healthy and stay that way for the entire season.