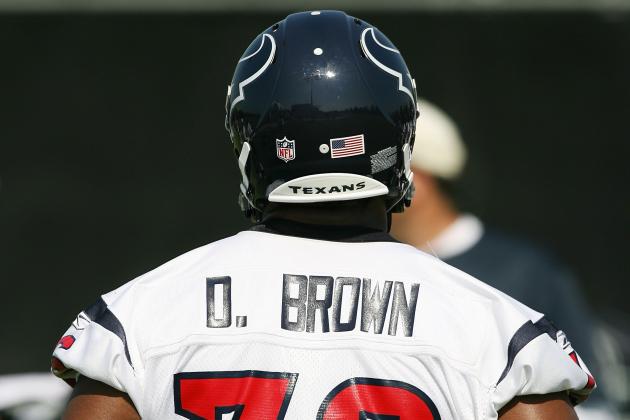 Some people don't even bother watching the preseason.

Those same people actually claim to be football fans. Do you believe that?

Even though it's not the real season, the real football fans know the preseason still has plenty of meaning, especially if you are using it to scout out sleepers for your fantasy league.

And if you've had an eye on the Houston Texans you might think things have been a bit boring, but I assure you, there is still plenty to consider.

So far there have been three noteworthy winners and losers of the Texans' preseason that you may want to think about.

Consider this: Against the Panthers, 10 Texans players caught a total of 16 passes.

None of them were named DeVier Posey.

Now, I understand that Posey didn't play his entire senior season at Ohio State, but as a second-round draft choice he was still expected to come in and take some of the work load off of Andre Johnson's shoulders.

Posey is currently listed as the sixth receiver on Houston's depth chart.

Hopefully he gets the chance to show his value or he may not be on the roster at all.

Ben Tate's ultimate goal is undoubtedly to be a full-time starter.

He is a very good running back and the preseason gives him even more opportunities to show that to other teams.

Until that happens though, he will run hard and give everything he has to being the occasional substitute for Arian Foster.

But his solid preseason production and consistent good health may get other teams interested in him being their starter when his contract with Houston is up.

Luckily, none of the injuries in Houston seem serious, including J.J. Watt's dislocated elbow.

But you can bet the second year player out of Wisconsin does not want anything whatsoever hindering his ability to be on the field in 2012.

Watt had 5.5 sacks and a forced fumble in 2011 as a rookie. Even the slightest setback could bring that dreaded "sophomore slump" if he's not careful.

Other than Andrew Luck taking over for Peyton Manning, not many other rookies have as much pressure to perform as well as the man he replaced.

With the departure of Mario Williams, Houston needed another defensive end and found one in Whitney Mercilus from Illinois.

So far he has done nothing but impress everyone around him and with 1.5 sacks against the Panthers in his first NFL game, he is impressing even more people.

At the University of Houston he was a record-breaking quarterback, but as a Houston Texan fourth-string rookie, Case Keenum may be struggling to keep his job.

Even though he completed two of his three passes for 33 yards against Carolina, the early word out of Houston has John Beck likely winning the third and final quarterback roster spot for the Texans.

I'm pretty sure 53.4 million dollars will make just about anyone a winner, and that's exactly what Duane Brown was given in his six-year contract extension on Thursday.

I'm thinking Matt Schaub and Arian Foster are also feeling like pretty big winners to know the big guy is going to be around for a while.