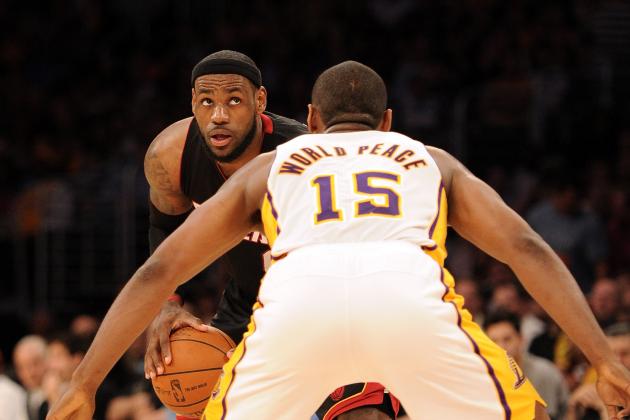 First off, it is by no means a given that we’re going to see a Heat-Lakers finals in 2013.  Injuries could keep either team from reaching the finals, and both teams have question marks: Wade, Bosh and Miller have been injury-prone for Miami, and Kobe, Nash and Howard all have health issues for Los Angeles.

The Heat have shown that they can get through the East with LeBron and either Wade or Bosh, but I doubt they can win a finals without all of the big three (and it goes without saying that if LeBron goes down, they’re fried, although LeBron has been quite durable so far).  I don’t think that the Lakers can even get out of the West without a healthy Kobe, Howard and Gasol, although maybe they could manage without Nash for a bit.

Assuming, though, that both teams are healthy, there’s still the question of their conference competitors.  Regardless of what Celtics fans say, I don’t think Boston is a serious threat to the Heat; they’re just getting older, and as for their draft picks, they’ll be lucky if Sullinger is as effective as Big Baby was.

The Sixers will be better with Bynum, and Doug Collins is a great coach, but I think a healthy Heat team beats them.

There remains a formidable Bulls team if Rose gets healthy, but remember, the Heat polished off the Bulls in five games two years ago, in spite of not having home court advantage, with LeBron basically shutting Rose down in the fourth quarters of those games (Bulls fans like to deny this, but it’s there for anyone to see on tape).  I don’t see that anything has changed other than the Heat getting better.  So it’s reasonable to expect a healthy Heat to return to the finals for a third straight year.

It’s not as certain that the Lakers will reach the finals, even if they remain healthy, thanks to the Oklahoma City Thunder.  In a Thunder-Lakers series, the Thunder would have the best player on the court (Durant over Howard), and the best No. 2 guy (Westbrook over Kobe—and yes, Westbrook is better than Kobe at this point).

But OK, let’s assume that both teams are healthy and that both teams can reach the finals.  What would be the decisive factors upon which the series would turn?  There are five.

1) Full Court or Half Court?

The Lakers are going to want half-court games.  They cannot win full-court, high-possession games against the Heat, who can win lower-possession games in a struggle.  There is a critical threshold of the number of possessions—let’s say 100—that would be decisive here.

In a best-of-seven series, if the Heat can generate two 100 possession games, you can count those as wins, and the Lakers would be left needing to win four out of the remaining five games, which would be tough.

2) The Battle of the Boards

I think we can take for granted that the Lakers would outrebound the Heat in a series, but the question is, by how much?  The Heat can win games against the Lakers in which they’re outrebounded, but there is a critical threshold in this category, like for possessions.

If the Lakers outrebound the Heat by, say, twenty, it’s hard to see them losing, but if the margin is seven or eight?  The Heat can minimize the Lakers’ edge on the glass by drawing Howard and Gasol away from the paint, by getting them into foul trouble or by making the game more full court than half court (see Item 1).  If the Lakers succeed in making the game a ground-and-pound affair, the advantage swings to them.

3) The Heat’s shooters not named LeBron or Wade

If the Heat shooters knock down the wide-open looks that LeBron and Wade create for them, the Heat can score even in the half court, space the Lakers’ defense and open up paths to the rim for LeBron and Wade.  If the Heat’s shooters are all off, it would be a long night for the Heat.

Note, though, that the Heat greatly increased their odds in this category with the addition of Ray Allen and with the return of Miller.

If Kobe Bryant is willing to be an efficient contributor to the Lakers' overall game plan, Los Angeles will be tough to stop, especially if they make considerable use of a Nash-Gasol pick-and-roll.  This would be the most deadly in the NBA, especially with Howard lurking near the rim for clean up.

But that would mean Kobe spending considerable time in the Lakers’ offense basically positioning himself on the wings for catch-and-shoots.  If Kobe isn’t willing to do this, if he needs to be the man, the Lakers are unlikely to reach their full potential.

Kobe shot 43 percent on field goals last season, the lowest since he was 19 years old, and he again shot 43 percent in the Olympics, in spite of being surrounded by great scorers and having no pressure to force things.  If Kobe insists on 20 to 25 shots, and shoots in the low 40s for percentages, watch out.  The legendary Laker could become the main obstacle to Lakers’ success.

If LeBron is LeBRON, the best player on the planet, as he was all throughout the 2012 post-season, he can trump a Laker edge in every one of the previously stated categories.  If he forgets to be LeBron, there’s no way the Heat can win.

LeBron is the Heat’s trump card, but they have to be able to play the card when they need to.  Kobe is the Lakers’ Jack who used to be an Ace and maybe thinks he still is.  If he doesn’t figure that out, the Heat might not need the trump card.

The Heat have a game where their shooters are cold, but not more than one, especially with Ray Allen.  I’m not at all confident that the efficient role player version of Kobe shows up, since we’ve never seen that guy yet, and I’m pretty confident that the LeBron of the 2012 post-season isn’t going away anytime soon.

That said, those five categories are the decisive ones, and if the Lakers get the edge in, say, three of them, they could take the series.