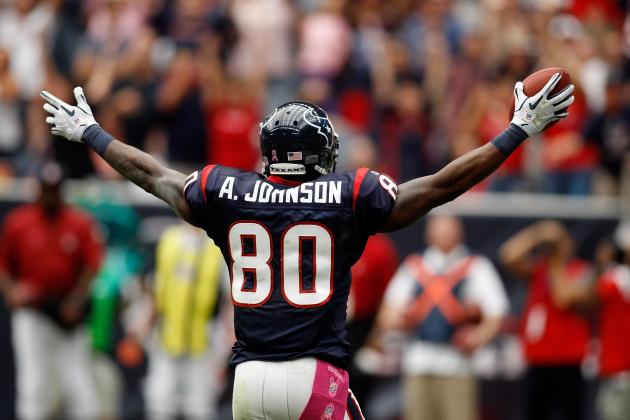 As we head into the 2012 season, we also begin the 10th year of this Houston Texans franchise.

The last few years have been promising. Most recently was last season when Houston won the AFC South for the first time and even won their first playoff game against the Bengals.

But, things haven't always been so pretty.

Remember the days of being the laughing stock of the league, Texans fans?

Getting sacked, throwing picks and an ongoing struggle to score points were just the beginning.

But even in those days, the Texans had some pretty good players here and there.

In Watt's rookie season, he had 47 tackles, 5.5 sacks and one forced fumble.

Obviously, he still has much to prove if he wants to move higher up on this list or possibly take over as the best defensive end Houston has ever had.

That may be hard, considering who is pretty close to the top of this list.

As a defensive captain, Smith has stepped up as a leader of the team.

Connor Barwin just started to earn his horns as a Texan last season with 47 tackles, 11.5 sacks and a forced fumble.

He keeps that up, and he could easily move up this list fast.

Robinson's best year was arguably his rookie season when he had his career-high six picks.

Although he is now a Falcon, during his days in Houston, he tallied over 300 tackles and 13 total interceptions.

Although just one big game by Arian Foster will surpass Williams' rushing record of 3,195 yards, he is still the Texans' all-time leading rusher.

Williams also won the Diet Pepsi NFL Rookie of the Year award in 2003 with 1,031 yards rushing and eight touchdowns and tallied over.

Johnathan Joseph spent the first five years of his career in a Bengals uniform where he racked up 14 total interceptions.

In his debut season as a Texan, Joseph had four more to add to the list.

This year, he will look to be an even bigger ball hawk than ever.

Amobi Okoye is the freak of nature who started as a true freshman for Louisville at the age of 16.

During his time with the Texans, he racked up just 11 sacks. But more importantly, he played the role of a mean interior lineman rather nicely.

Just ask any offensive lineman who ever lined up against him.

During his three seasons with the Texans, Aaron Glenn had 11 interceptions, two of which were returned for a touchdown.

Although he played most of his career as a Jet, his three seasons with Houston were definitely ones to remember.

Unfortunately, Pollard only spent two seasons with the Texans.

He has only had eight interceptions in his career, but has 13 forced fumbles.

Four of those were interceptions, and five of the forced fumbles happened in a Texans uniform.

Slaton could have been where Arian Foster is on this list if it weren't for the 10 fumbles he had in his first two seasons.

Texans fans will also remember he was also quite the weapon as a receiver out of the backfield, as well as a return specialist.

Daniels has played all of his career as a Texan tight end.

Although injuries have been a problem in years past, Daniels has still scored 20 touchdowns from 299 receptions.

Hopefully, 2012 will be his first full season in four years, and those numbers will get even better.

Some people may overlook the fullback position, but it's nearly impossible to ignore Leach.

As the protector of Matt Schaub's blind side, Duane Brown has helped this offense become one of the most explosive in the league.

Brown was named second-team All-Pro in 2011 and has missed just four games in as many seasons as the starting left tackle.

DeMeco Ryans won the Defensive Rookie of the Year Award in 2006 with 155 tackles, 3.5 sacks, an interception and a forced fumble.

This season will be his first in a different uniform, but the Eagles should be very happy with Ryans' potential.

Jason Babin's best years came after his time with Houston, including last season as an Eagle when he had 18 sacks and three forced fumbles

Still, for his first three seasons as a Texan, Babin had 13 sacks and two forced fumbles.

Imagine what Houston's defense would have been like with him and Super Mario playing together now.

Although lately he has struggled with injuries, Matt Schaub has become one of the most impressive quarterbacks in recent years.

Although he has only been in the NFL for three seasons, Cushing has become one of the best linebackers in the league.

Over those three seasons, he has over 300 tackles, 9.5 sacks, six interceptions, five forced fumbles and even a safety.

His high level of intensity and game play won him Defensive Rookie of the Year honors and a Pro Bowl selection in 2009. He is also a two-time All-Pro and was even voted the Texans' Team MVP in 2011.

He was an undrafted free agent out of the University of Tennessee who, over three seasons in the NFL, became a two-time All-Pro and Pro Bowl selection.

In 2010, his 1,616 rushing yards led the NFL. Add that to the 604 receiving yards and 18 total touchdowns he had that season and it's easy to argue he should be higher on this list.

Where do I begin with this guy?

Andre Johnson has been one of the best receivers in the NFL since nearly day one.

He has nearly 10,000 receiving yards and 52 touchdowns in his career.

Along with several other awards and recognitions, he is a five-time Pro Bowler, four-time All-Pro and two-time NFL receiving yards leader.

Arguably the most prolific pass-rusher in the NFL, Williams has 53 sacks in his career.

Although he was put on the injured reserve list after just five games last season, he already had five sacks in his first year, switching from defensive end to outside linebacker.

Williams is an All-Pro who will be sorely missed by Houston after he signed a $100 million dollar deal with the Buffalo Bills this offseason.