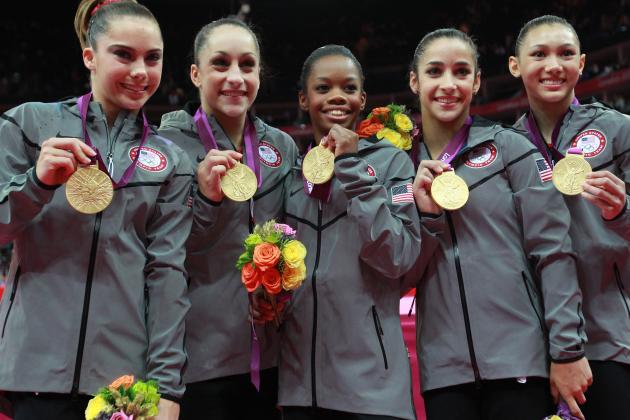 Some Olympic sports belong to the young. Of the 15 U.S. Olympians who are 18 or younger, five are easily recognized—they're the Fab Five. No? Jalen Rose complained? OK, fine—"Fierce Five."

But we have a lot of turnover in gymnastics, so we can't exactly expect the Fab/Fierce/Fantastic Five to be back in four years.

Other sports have repeat Olympians. You don't need us to tell you gold medalists Alex Morgan (age 23), Missy Franklin (17) and Claressa Shields (17) have a good shot to do it again in 2016.

You might need us to remind you that Katie Ledecky, absolutely the youngest athlete on Team USA at age 15 (not 15.5, like Kyla Ross), also is taking a gold medal home from London.

And a lot of athletes made an impression in London without picking up a gold. Yet. Keep an eye on these athletes over the next four years, and remember their names when the cameras move to Rio.

U.S. women haven't had much success in foil fencing, but Kiefer surprised a lot of people with a bronze medal in the World Championships last year.

She couldn't quite repeat that success in London, but she was the first American to make the women's foil quarterfinals since 1996.

Notre Dame has to feel good about its incoming freshman.

Already a top-10 archer, Leek has been honing her craft at the U.S. training center in Chula Vista, Calif.

After her elimination in her second match of the Olympics, Leek was already ready to go back.

That's determination. And at 23, she'll hardly be over the hill in her sport.

BMX is a wild and unpredictable sport, particularly in an Olympic final. One run, eight riders.

Connor Fields came out on the wrong end of the chaos this time. So consistent through the early rounds and dominant in the semifinals, he got a slow start in the final and got stuck behind a slow rider first and a crashed rider second.

Maybe next time he'll be the one to avoid the mishaps and finish first.

Yes, there's life in American tennis beyond the Williams sisters, the Bryan brothers and John Isner. McHale is moving on up in the WTA ranks—115 at the end of 2010, 42 the next year, and now 26.

This year, she has wins over Petra Kvitova and Caroline Wozniacki. And she's 6-3 in the majors.

She got a tough draw in London, facing WTA No. 12 Ana Ivanovic. By the time McHale reaches Rio, she could be the one players should be fearing.

Coleman even lives with a flying squirrel now. But he was unable to land the move when he tried it in London.

Inexperience surely hurt him in these Games. That won't be a problem next time.

The Brooklyn DJ came into the Games on a roll, rising quickly through the rankings. But he was still a good bit younger than his Olympic opponents.

The experience gap didn't hurt him in his first bout, a 15-5 win, but he ran into Italy's Andrea Baldini in the Round of 16.

In the team event, he helped to cap a big comeback to upset France in the quarterfinals, but losses to Italy and Germany kept the USA off the podium.

All of the U.S. foil fencers were young this time around, and 18-year-old Alex Massialas could join with Imboden to give America multiple medal contenders in Brazil.

Sarah Scherer already overcame a lot to get to the Olympics—the death of her brother, who competed in Beijing, and an ill-timed elbow injury before the Games.

Yet there she was in the first event of the Games, the 10-meter air rifle, and was among the eight finalists in the 56-shooter event.

She's also pre-med at Texas Christian. We're talking about someone who knows how to focus. And shooters don't age quite as quickly as gymnasts.

If martial arts take a lifetime to master, then McPherson is just getting started. That's worrying news for her opponents.

She came into the Games with World Championship experience, reaching the quarterfinals in 2011. But she wasn't expected to oust world champion and home favorite Sarah Stevenson in London.

McPherson took out Stevenson 5-1, then fell to Turkey's Nur Tatar. But Tatar made it to the final, giving McPherson another chance at the repechage.

The first opponent was no problem—McPherson won 15-2. (Check out the highlights, but be warned: McPherson has a stadium-piercing shriek.) Then in the 63 kg bronze-medal bout, McPherson was tied 3-3 with Slovenia's Franka Anic after the first period before pulling away for the 8-3 win.

That bronze medal could put a big target on her chest protector for the next Olympics, but she'll have four years to get used to it.

In the road race, he slammed his fist in frustration as he finished fourth, just a bike length away from a medal. In the time trial, the finish wasn't as close (and with a staggered start, not as dramatic), but once again, he was fourth.

Phinney is also an accomplished track cyclist, with a pair of world titles in individual pursuit. He was seventh in that event in the 2008 Games, but it's no longer on the Olympic program.

He also had a "small budding romance" with Shawn Johnson in Beijing.

So even with the business of road cycling ahead, he seems to enjoy the Olympics and will still be in his prime in Rio.

Van Garderen didn't make a big impression in the Olympics, but making it to London wasn't the big accomplishment of his breakthrough year.

Four more years battling through the Alps and Pyrenees should make Rio seem like a breeze.

Gwen Jorgensen is the oldest athlete on this list. But she was also the youngest of the five U.S. triathletes (male or female) in London. Thirty-somethings can still compete in this sport.

And in triathlon terms, Jorgensen is young. You could even call her a newbie. When many of her teammates were competing in Beijing, she had never competed in the sport and knew little about it.

Her podium finishes in the World Championship Series and World Cup would indicate she's a fast learner. Maybe in Rio, she won't have a flat tire to slow her down.

The sixth-youngest U.S. track and field Olympian was one of only five high jumpers to clear the 2-meter mark before the Olympics.

Four of them did it again in London, but Barrett also cleared a personal-best 2.03 meters (6'8") to claim silver.

The rising Arizona senior, a back-to-back NCAA champion, showed plenty of youthful exuberance in the competition. We'll see what she does as a veteran in 2016.

The fifth-youngest U.S. track and field Olympian has a few things in common with Brigetta Barrett. The Kansas State high jumper won his second straight NCAA championship at 2.34 meters (7'8"), ranking him near the world leaders.

He was still less experienced than his teammates, including world champion Jesse Williams. But he wasn't flustered under the bright Olympic lights.

Erik Kynard sailed through qualifying with just one miss. He had an early miss in the final but cleared 2.29 meters on the first attempt. Then he sailed over 2.33, also on the first attempt. Only one other jumper, Russia's Ivan Ukhov, also cleared that height, and Kynard went on to take gold at 2.38.

How much higher can he go in the next four years?

The fourth-youngest U.S. track and field Olympian is also one of its most accomplished.

He took bronze in the long jump—barely bumped out of silver by Australia's Mitchell Watt. A few days later, he returned for the triple jump and claimed his silver behind USA and former Florida teammate Christian Taylor.

What will it take for this guy to get some recognition? Maybe gold in Rio?

Hsing was actually the oldest of the three-women U.S. table tennis team. She also advanced the furthest in singles, getting to the third round and taking two games off eventual gold medalist Li Xiaoxia of China.

She'll also have plenty of help getting ready for Rio, thanks to her Uncle Warren and Uncle Bill. You know them by their last names—Buffett and Gates.

Perhaps 23 isn't that young for a 400-meter dash phenom, but Bryshon Nellum hit the reset button on his career as he was forced to recover from a shooting in 2008.

In 2012, he got back to his personal best and then exceeded it, earning a spot on the Olympic team.

He barely missed the final in the 400-meter dash, then earned a silver medal in the 4x400 relay, leading off in the final.

He'll lead his country again, bearing the flag in the 2012 Closing Ceremony before attention eventually shifts to Rio.