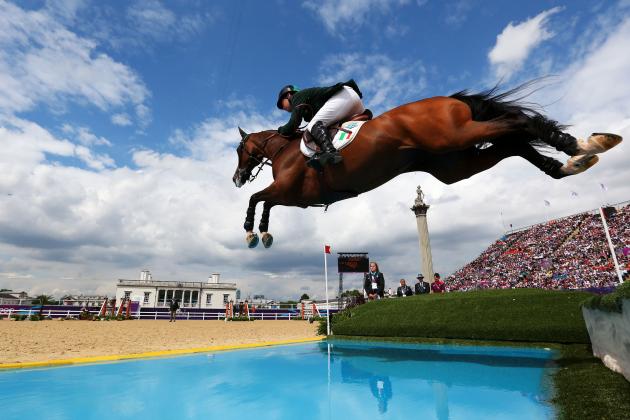 Remember the old "Swedish bikini team" ads? It seems Usain Bolt prefers to hang out with the Swedish handball team. And yes, in these social-media Games, he tweeted about it and reassured everyone that he woke up healthy and ready.

I am up and ready to go againinstagr.am/p/N_VcLvIcdB/

Not sure what the Swedish handballers are celebrating—they finished last in their group.

So that's one surprise on another busy day in London and associated Olympic venues. What else stood out? Click through the slides to find out.

Tunisia lost to the USA by 47 points in men's basketball action. They lost to Nigeria by four.

Lithuania lost to the USA by just five points, leading late. They beat Nigeria by 19.

And yet Tunisia led Lithuania after three quarters, 54-50. Lithuania ended the game on a 20-7 run to take the win and clinch a spot in the quarterfinals.

Meet Chamberlain Oguchi. You might know him from Oregon or Illinois State.

But you probably didn't expect him to drop 35 points on France and come within a few points of single-handedly leading Nigeria into the 2012 Olympic quarters. He hit eight of his 14 three-point attempts, the last one bringing Nigeria within four points with 2:59 to play.

He did score 11 points for Nigeria against the US, however. Might not have noticed that performance while the USA was scoring 156.

Defending champions and No. 2 seeds Phil Dalhausser and Todd Rogers were already out. But the US still had No. 4 seeds Jake Gibb and Sean Rosenthal in the men's beach volleyball quarterfinals.

In a three-set epic, Latvians Janis Smedins and Martins Plavins took out the last American pair.

The US men had previously won three of four Olympic beach volleyball tournaments, and this is the second time Americans won't be on the podium.

South Africa doesn't have much of a history in field hockey. The USA came into the Olympic Games with a win over medal contender Argentina.

Neither team was going to advance in the competition, but the Americans hadn't played badly, repeating the win over Argentina and losing by a single goal respectively to Germany, Australia and New Zealand. South Africa's losses: 7-1, 4-1, 2-0, 1-0.

And it wasn't just a question of well-taken shots. South Africa outshot the USA 27-6.

Surely Felix Sanchez's best days were behind him. The New York-born hurdler, representing the Dominican Republic, won 400-meter hurdles world titles in 2001 and 2003, then Olympic gold in 2004.

He hadn't been a factor in recent years, which isn't a surprise for a speedster who'll turn 35 later this month.

Coming into the Games, his best time of the year was 48.56 seconds, well behind the favored Americans, Puerto Rico's Javier Culson and Britain's Dai Greene. He hadn't broken 48 seconds since his golden year of 2004.

He suddenly found his feet in London, running 47.76 in the 400-meter semis. He did even better in the final, racing away with a time of 47.63. USA's Michael Tinsley was several strides back, taking silver.

Sanchez then knelt on the track, pulled a photograph of his late grandmother out of his uniform and kissed it in celebration and tribute.

Arthur Zanetti isn't a no-name—he has been on the podium in major championships before. But Brazilian gymnastics doesn't have a lot of Olympic history.

In the rings final, Zanetti was facing China's Chen Yibing, who has owned this event for the last six years.

After several days of competition, Britain's equestrian jumping team and the Netherlands' team were separated by...nothing.

It went to a jumpoff. And the man who clinched Britain's gold, Peter Charles, hadn't been born when Britain last won this event.

Croatia's Giovanni Cernogoraz was shooting through his tears, already elated at having clinched at least a silver medal in the men's trap.

But the man who works in his family's restaurant back home kept up his hot shooting in the shootoff. He had hit 122 of 125 targets in qualification, then 24 of 25 targets in the final. In the shootoff? All six.

Canada took a stunning lead against the U.S. women in the first half on a Christine Sinclair goal. The US women answered on a Megan Rapinoe corner kick that eluded the defense and went in.

Sinclair again, 2-1. Rapinoe again, with a stunning blast off the far post. 2-2.

Sinclair again gave Canada the lead and it took a pair of questionable calls to get the USA level again—goalkeeper Erin McLeod whistled for taking too much time with the ball, then a handball in the box for a penalty kick that Abby Wambach converted.

The US had the better of play in extra time, but with time ticking down and players getting hurt all over the field, the ball floated into the box for Alex Morgan. Her scoring slump couldn't have ended at a better time.