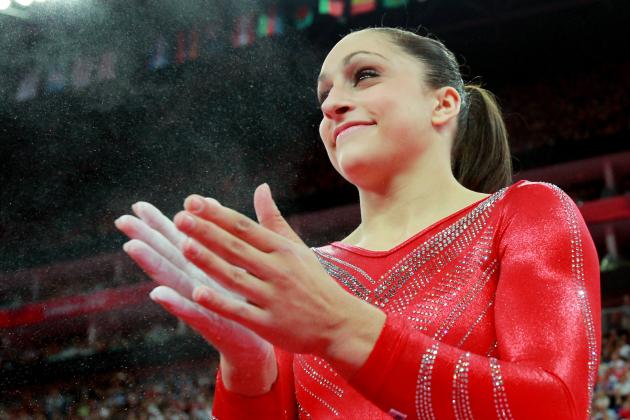 Jordyn Wieber watched from the stands as teammate Gabby Douglas won gold in the event in which she was the reigning world champion, the women's gymnastics all-around.

Wieber drew attention to a peculiarity of gymnastics rules, in which countries can only enter two athletes in individual finals. (Another one popped up in the all-around final when Aly Raisman missed bronze through an arcane set of tiebreakers.)

The final was too much for her mom to bear. But Wieber cheered on her teammates.

Hopefully, Wieber wasn't running the math in her head, thinking that the 60.032 she posted in qualifying—better than her world championship-winning score of 59.382 last year—would've earned her a bronze medal in the final.

Gold medalist Douglas (62.232) and silver medalist Viktoria Komova (61.973) bumped up their scores from qualifying. Raisman slipped from a 60.391 in qualifying to a 59.666, good enough to match the fourth place she posted in the 2011 World Championships.

(Another irony: If Wieber had done just a little bit better in qualifying, Raisman still would've made the final. But Douglas, who went on to win gold, would not have made it.)

She'll get much more experience cheering and supporting in the future. She's going to UCLA but has already turned professional—in other words, signed plenty of deals with sponsors. Those deals rule her out of NCAA competition, but she can be an assistant coach.

Apart from the tears no one will begrudge her, Wieber has held her composure throughout her disappointment. She was a pillar of strength for the U.S. team as it flew through the team final to win gold.

So she'll have college classes, a coaching gig and a sponsor-pleasing image, though surely not as many endorsement deals as she would've had with an individual gold. The next question: Will the 17-year-old be back to make another run in Rio four years from now?

If comebacks were easy, Wieber, Douglas and Raisman might not have been in their positions in the first place.

Multiple medalist Shawn Johnson brought her comeback bid to a halt just before the U.S. championships this summer. Nastia Liukin made it to trials but flopped out. Alicia Sacramone, well past 21, barely missed out on the team.

But Wieber won't be too old, even in a sport dominated by teenagers. Romania's Sandra Izbasa contended this year at 22. Italy's Vanessa Ferrari is still going at 21. And Britain's Elizabeth Tweddle led the uneven bars qualifying at 27.

As Johnson and Liukin can attest, making the U.S. team might be the toughest part. Kyla Ross will still be a teenager, and who knows how many young prospects will turn the corner in the long four years between Olympics. Douglas could give it another run as well.

The turnover in American gymnastics is simply staggering. Bridget Sloan was a 2008 Olympian and 2009 world champion, but she was injured in warmups for this year's trials. None of the 2008 team made it back. In 2004, gymnasts from the 2003 World Championship team were cut.

So making it back won't be easy, and it's not something Wieber can decide before the closing ceremony. It'll take health and heart. She'll be asked about her plans today, but that answer will be tentative at best. Only she will know in three-to-four years if she's up for it.

And no matter what, she'll still have a priceless gold medal from the night she and her teammates lit up London. Not to mention a floor exercise final and an opportunity to grab one more before she leaves London to start the rest of her life.